JAKARTA, Indonesia (RNS) — In mid-December, hundreds in this majority-Muslim country rallied outside the Chinese Embassy here to protest China’s treatment of its Muslim minority Uighurs. Similar rallies took place in Bandung, Aceh and Surakarta the same day, all calling on the Indonesian government and President Joko “Jokowi” Widodo to speak up on behalf of Uighur religious and human rights.

For Uighur activists, the protests were a welcome sign that Muslim countries allied with China were willing to pressure Beijing about its crackdown against the Uighurs. “People in Muslim-majority countries are starting to speak up and starting to realize what’s happening,” said Omer Kanat, director of the Uighur Human Rights Project in Washington, D.C.

More than a million Muslims in China’s Xinjiang province are reportedly being held in massive re-education camps, where inmates are allegedly subject to forced labor. Mosques have been shut down, destroyed or turned into tourist bars. Traditional Friday prayers are now barely attended.

“China takes these protests very seriously, because they have great interest in Muslim countries,” said Kanat. Several Muslim-majority countries are part of China’s massive Belt and Road Initiative, including six of the top 10 countries getting Chinese investment for infrastructure improvements, according to a report from the American Enterprise Institute.

In Indonesia, however, the rallies, which were followed by strong statements of support from the opposition party leaders, may be aimed less at China than at Jokowi’s leadership — and at ethnic Chinese Indonesians. At the December protest, several notorious right-wing Islamist organizations made their presence known, notably the Islamic Defenders Front. The IDF’s leader, Slamet Ma’arif, helped lead mass mobilizations in 2016 and ’17 against Jakarta’s ethnic Chinese, Christian Gov. Basuki “Ahok” Tjahaja Purnama, using racist and religiously tinged rhetoric.

Even the anti-communist chants heard at the rallies are not taken lightly in a country that, a few decades ago, saw massive anti-communist violence and has seen, in recent years, a resurgence of red-baiting.

With Indonesia just months away from national elections, many believe the rallies were focused more on domestic politics than on genuine support for the Uighurs.

“The rally had a strong political overtone, with speakers leading anti-Jokowi chants,” said Aaron Connelly, a research fellow at the International Institute for Strategic Studies.

Mainstream Islamic organizations are also reacting. Days after the rallies, the chairman of the Indonesian Ulema Council’s advisory board, Din Syamsuddin, released a strong statement condemning the oppression of Uighur Muslims but, notably, not calling on the government to take action.

Despite the political implications, those Muslims who have been struggling to get countries to put pressure on China welcomed the protests. Kanat has hope that real pushback will finally be applied to China this year.

He would like to see Indonesia bring this up at the Organization for Islamic Cooperation, or even the United Nations Security Council, where Indonesia currently holds a rotating seat.

“There is enough evidence and information,” said Kanat. “In 2019, governments, I hope, will take more concrete actions.” 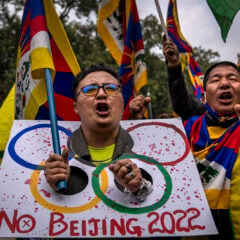 Opinion
Five stories NBC probably won’t cover at the Beijing Olympics
Follow us on Facebook!
Submit your photos to RNS