(RNS) — The only known existing autobiography of a slave written in Arabic in America is now freely available to the public online, thanks to the Library of Congress.

Omar ibn Said, born in about 1770 in modern Senegal, was captured at age 37 and taken to Charleston, S.C., to be sold. In 1810, he ran away and was captured again, as he had stopped to pray, in Fayetteville, N.C. There, he was bought by James Owen and remained enslaved until his death in 1864. Like an estimated 20 percent of enslaved Africans taken to the Americas, Said was Muslim. He was also a wealthy and highly educated Islamic scholar who studied under his brother and other Muslim religious leaders.

The Library of Congress acquired Said’s 15-page autobiography, written in 1831, from British auction house Sotheby’s in June 2017. The digitized version was published this week on the library’s website and facsimiles have been made available for public viewing in Washington, D.C. 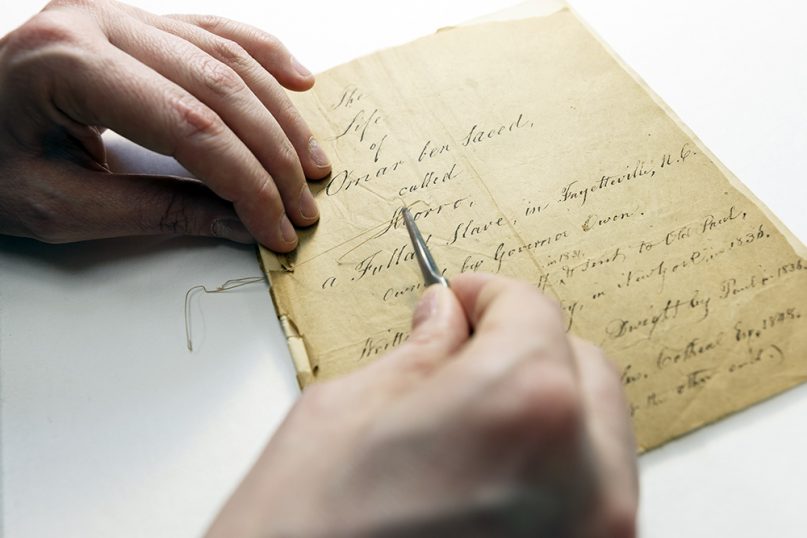 Michelle Smith from the Conservation Division disbinds the autobiographical manuscript “The Life of Omar ibn Said” in preparation for further preservation treatment on June 15, 2018. Said was abducted from Senegal in 1807, sold into slavery in South Carolina, and after escape and recapture in North Carolina, became famous for his pleas for release written in Arabic. Photo by Shawn Miller/LOC

“This autobiography creates a completely different picture of who the people brought as slaves to America were,” Mary-Jane Deeb, chief of the African and Middle Eastern Division at the Library of Congress, told Religion News Service. “It shows that many of them were monotheists who followed an Abrahamic faith, and that some were very highly educated. So our concept of who was a slave is turned upside down.”

Including the Arabic manuscript of “The Life of Omar Ibn Said,” the Omar Ibn Said Collection includes 42 original documents in both English and Arabic, along with Arabic texts written by another West African slave in Panama. The collection was put together in the 1860s by abolitionist Theodore Dwight, who was a founding member of the American Ethnological Society and wanted to educate Americans about Muslim and West African cultures. Since then, the documents have been passed through the hands of several private collectors before reaching the Library of Congress and entering the public domain.

“The Life of Omar Ibn Said” is particularly valuable to researchers because it is written in Arabic, the only known narrative in that language written during enslavement. A portrait of Omar Ibn Said around the 1850s. Photo courtesy of Yale University Library 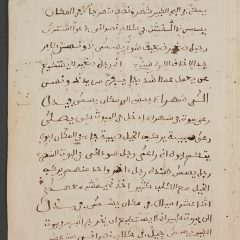 A page of Omar Ibn Said’s autobiography written in Arabic in 1831, on which he describes how he was captured and brought to South Carolina. Photo courtesy of LOC “When an enslaved person wrote in English, the credibility may be different,” Deeb explained. “Someone could be looking over their shoulder, editing, dictating or punishing them for writing something negative. But when they are writing in Arabic, it is more authentic. It is a truer voice.”

Though Said outwardly converted to Christianity in 1821, scholars say he likely remained Muslim: He included Islamic prayers and texts in his writings, and his autobiography begins with Quranic passages.

Said’s last known Arabic manuscript, titled “The Lord’s Prayer,” actually paraphrased a chapter of the Quran that speaks of Islam’s ultimate victory, according to Richard Brent Turner’s book “Islam in the African-American Experience.” Turner, who called Said the “most famous African Muslim slave in the antebellum period,” also noted that Said’s case shows how sophisticated African Muslim slaves manipulated their paths through slavery through an “inner jihad or the struggle within himself to maintain his faith in an alien environment.”

On Feb. 5, the Library of Congress will host a public program for African American History Month featuring scholars focused on the diaries of Said and other enslaved people.

Deeb noted that there may be other Arabic manuscripts that researchers have not yet uncovered. “I would urge people to look in their attics and see if their grandparents left something in there,” she said. “If you see something in a squiggly writing, don’t throw it away. It could be very precious.”