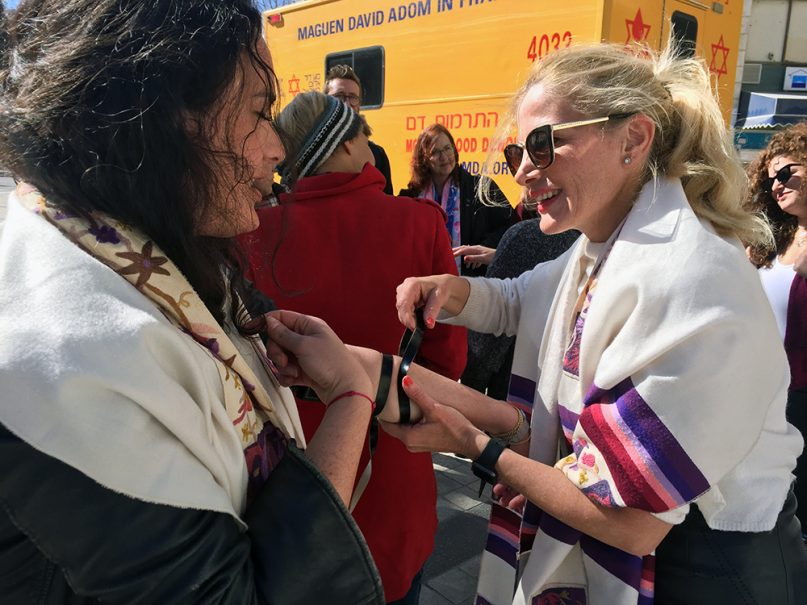 Women of the Wall board member Dina Greenberg, right, helps another woman lay tefillin during an event in Jerusalem on Feb. 3, 2019. Photo by Elizabeth Kirshner and Tammy Gottlieb/Women of the Wall

JERUSALEM (RNS) – On a bustling street corner in downtown Jerusalem earlier this month, a group of determined Jewish women performed a commandment long reserved for men.

Standing in front of a table set up by the feminist prayer group Women of the Wall, the women tied on tefillin — the small boxes with passages from the Torah curled inside that Jews “lay,” or strap to their foreheads and arms during daily prayer.

Chaya Rowen-Baker, a Conservative rabbi, brought her daughters, aged 13 and 15, to the booth because she wanted to make the experience a teaching moment.

“I feel it’s important for their education. I want them to understand the importance of religious freedom,” Baker said after the three had wrapped themselves in colorful Women of the Wall prayer shawls and carried out the commandment.

Baker said she also wanted “to set an example for other women who might be considering laying tefillin” but lack the confidence to do so. “We’re making a public statement that women laying tefillin is normative and okay, and it’s something that women can do, according to most rabbis.” 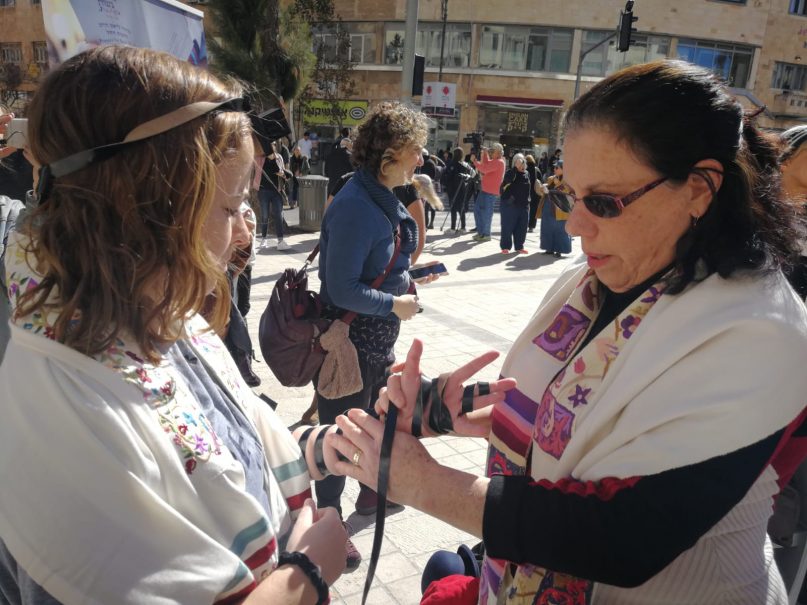 Women of the Wall board member Linda Avitan, right, helps another woman lay tefillin during an event in Jerusalem on Feb. 3, 2019. Photo by Elizabeth Kirshner and Tammy Gottlieb/Women of the Wall

Laying tefillin, also known as phylacteries, is a central commandment in Judaism — one that Jewish men have been carrying out for millennia. But in the past few decades, as egalitarianism in many Jewish circles has blossomed, so too has the desire, at least by some women, to fulfill this ancient, sacred rite, despite the fact that women aren’t required to do so.

While Reform, Conservative and even some modern-Orthodox women in Israel regularly lay tefillin in the privacy of their homes, synagogues and seminaries, few do so in public, fearing a backlash from fervently Orthodox Jews who believe that tefillin are the domain of men, not women.

Women of the Wall’s event was part of the Worldwide Wrap, an annual campaign spearheaded by the U.S.-based Conservative Movement to encourage men and women to lay tefillin.

It was just the latest initiative by Women of the Wall to bring women’s religious participation to a public setting.

It has been an uphill struggle. 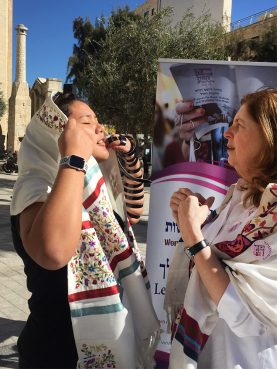 Women of the Wall co-founder Anat Hoffman, right, helps another woman lay tefillin and adjust a prayer shawl during an event in Jerusalem on Feb. 3, 2019. Photo by Elizabeth Kirshner and Tammy Gottlieb/Women of the Wall

For the past 30 years, successive governments have refused to recognize the organization’s right to hold collective women’s prayer services and read from a Torah scroll in the women’s section of the Western Wall, despite court rulings to the contrary.

Not long after Prime Minister Benjamin Netanyahu finally agreed to pleas from Women of the Wall and non-Orthodox Jews to create a pluralistic prayer space at the wall, he reneged when his ultra-Orthodox coalition partners threatened to topple the government.

It took months before Jerusalem’s municipal government allowed Women of the Wall to set up its tefillin table on King George Street, but not at Zion Square, a busier location the organization had requested.

By contrast, Chabad, an Orthodox movement, has a permit to operate a tefillin stand on the square, day in and day out. Each week, hundreds of men lay tefillin at the Chabad table.

“We have been corresponding with the municipality since October, and our lawyer told them that you can’t give a year-round permit to Chabad and reject us,” said Lesley Sachs, Women of the Wall’s executive director. “The site we were given on King George Street isn’t as good as Zion Square, where people meander. People pass our location on the way to somewhere else.”

That didn’t prevent two to three dozen women and some men from approaching the tefillin table for the two hours it was open, some merely out of curiosity and others intent on laying tefillin.

Still others came to confront the activists.

One older woman, who, from her clothing, appeared to be secular, called the event “ugly and disgusting.” An hour later a young Orthodox man accused the women, wrapped in prayer shawls, of provocation.

“I wouldn’t go to a vegan’s house and put a steak in front of his eyes,” the man shouted. “This is Jerusalem!”

Another Orthodox man urged him to calm down. “A couple of months ago the police stopped me after I became agitated during Women of the Wall’s prayers at the Western Wall. I regret my actions,” he said. 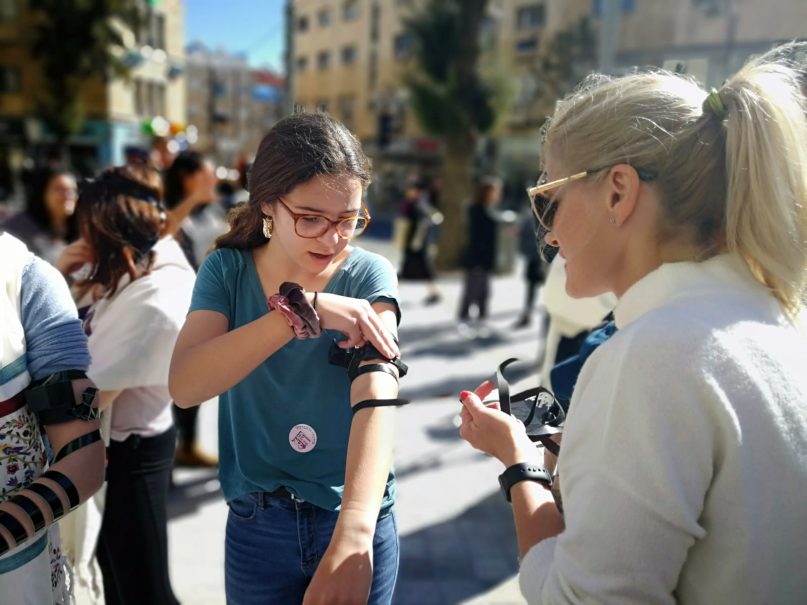 Women of the Wall board member Dina Greenberg, right, helps other women lay tefillin during an event in Jerusalem on Feb. 3, 2019. Photo by Elizabeth Kirshner and Tammy Gottlieb/Women of the Wall

The criticism didn’t prevent Melissa Carp, an American rabbinical student studying at the Reform Hebrew Union College for the year, from laying tefillin, along with several of her classmates.

After wrapping a prayer shawl around her shoulders, Carp placed a square tefillin box on her upper arm and wound the black straps several times, until they reached her fingers. A moment later she placed a second tefillin box at the front of her head, secured by pre-tied straps. Finally, she recited a prayer acknowledging God’s presence and the commandment to lay tefillin.

“It was meaningful to do this in a really public space in Jerusalem,” she said. “When Women of the Wall prays at the Kotel [Western Wall], they’re attacked for praying in a holy place. Yet they’re also being attacked while praying in an everyday space.”

Carp called this proof that objections to women’s communal prayer in tefillin and prayer shawls isn’t about a site’s holiness.

Sachs felt the event was successful, even when people came up to criticize the women.

“We had some heated arguments, but we’re always happy to talk about what we’re doing and why,” Sachs said.

Religion Hub
Mufti’s talk of women’s duties angers some Turkish Cypriots
Follow us on Facebook!
Submit your photos to RNS