LONDON (RNS) — The Church of England’s most senior leaders are expected to rebuke Britain’s political leaders over their handling of Brexit at the church’s General Synod this week.

In a special motion at synod, just weeks before the Brexit deadline, the archbishops of Canterbury and York will urge politicians to do more to heal divisions in society.

The motion, put forward by Justin Welby, archbishop of Canterbury, and John Sentamu, archbishop of York, says that “social divisions feel more entrenched and intractable than for many years.” It also refers to “the divisions within the major political parties which are stifling the emergence of a hopeful and viable visions for the common good in our communities.”

Although the motion does not explicitly mention Brexit, it says that “the nation’s leaders must work together for the common good at this time of division” and that the Christian commitment “to putting the voices of the poor and marginalized at the heart of the nation’s concerns” must be reaffirmed.

The archbishops call on every diocese and parish to pray regularly for Parliament members and the government, seeking God’s strength and wisdom for the responsibilities they bear. 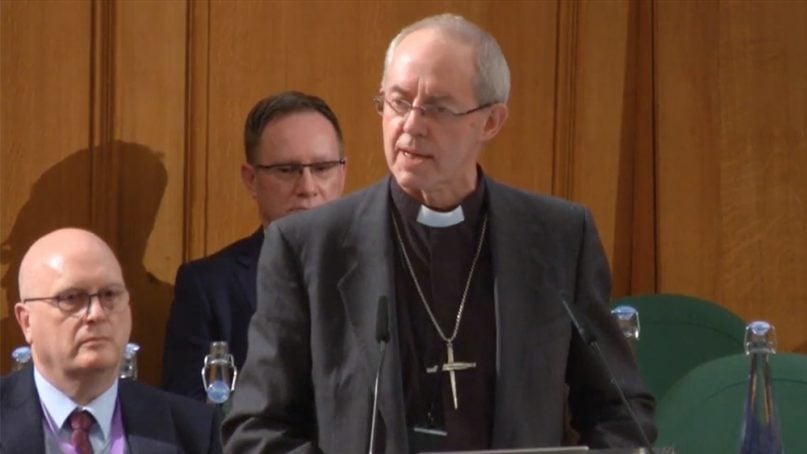 Justin Welby, archbishop of Canterbury, addresses the General Synod at Church House on Feb. 20, 2019, in London. Video screengrab via Church of England

The synod debate comes in the same week that Prime Minister Theresa May has written to all 317 Tory MPs, urging them to unite behind a Brexit deal while warning them “history will judge us all” over the process. But three of her Conservative MPs quit their party. Anna Soubry, Sarah Wollaston and Heidi Allen wrote a joint letter to May saying that the government’s “disastrous handling” of Brexit was the final straw. Meanwhile, May was striving yet again this week to persuade the European Union to agree to changes to the “backstop” plan to prevent the return of customs checks on the Irish border.

The U.K. remains on course to leave the European Union on March 29, even as May has been unable so far to convince a majority of MPs to back the withdrawal terms she struck with the EU last year.

The country also remains deeply divided over Brexit, with growing anxiety about the impact on jobs and investment when Britain quits the EU, especially if a new relationship with Europe is not in place by the time of Britain’s withdrawal.

Church of England Synod officials have cleared almost two hours in the agenda on Saturday afternoon (Feb. 23) to enable the assembly of representatives of clergy, bishops and lay members of the church to debate the motion on the state of the nation.

This is at least the third time Welby has voiced his concern in the Brexit debate. Two years ago, in his presidential address to General Synod, he said the Church of England must take part in reshaping post-Brexit Britain or risk seeing the country ruined by its current problems.

“This could be a time of liberation, of seizing and defining the future, or it could be one in which the present problems seize our national future and define us,” he said. 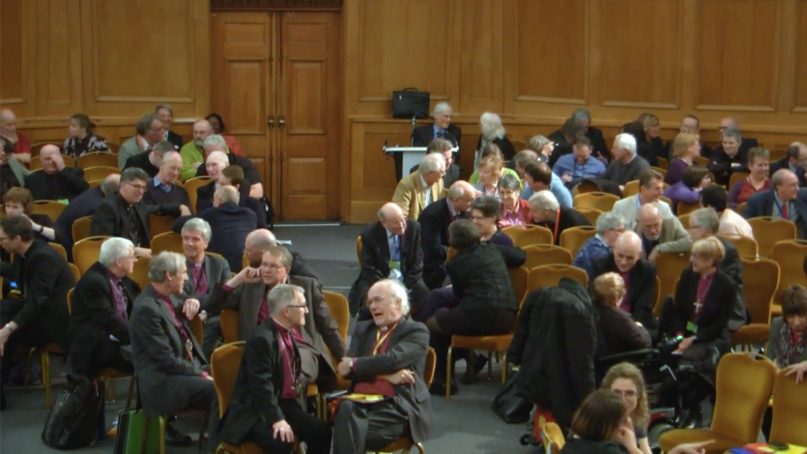 In January, speaking in the House of Lords, Welby warned that if Parliament fails in the task entrusted to it of sorting out a Brexit deal, a second referendum might be necessary. “This is about more than Brexit, and Parliament must not show itself unfit for the job,” he said.

Just before Christmas, Church of England bishops also said they were praying for “courage, integrity and clarity for our politicians” at a time of turmoil over Brexit, while Welby and Sentamu called on churches to pray for politicians, “praying for wisdom, courage, integrity and compassion for our political leaders and all MPs; for reconciliation; and for fresh and uniting vision for all in our country.”

Their comments were also endorsed by the Rt. Rev. Susan Brown, moderator of the General Assembly of the Church of Scotland, along with the Most Rev. John Davies, archbishop of Wales.

With time running out, the U.K.’s Anglican churches aren’t the only ones praying for Britain. The umbrella organization Churches Together in Britain and Ireland has issued a request that all its member churches and associated bodies join together “in a time of dedicated prayer for the political situation in the United Kingdom.”

The moderator of CTBI, Angaelos, Coptic archbishop of London, asked for help from abroad as well, saying, “We hope and pray that every person of faith will join us in prayer across our nation, and beyond.”