(RNS) — Amy-Jill Levine has described herself as a “Yankee Jewish feminist” and said that although she attends an Orthodox synagogue in Nashville, she is “often quite unorthodox.”

For one, Levine teaches both Jewish studies and New Testament at Vanderbilt Divinity School.

And the professor has written a new Lenten study titled “Entering the Passion of Jesus: A Beginner’s Guide to Holy Week,” published by Abingdon Press, an imprint of the United Methodist Publishing House.

“If I’m not a believer in Jesus, and I think these are fabulous stories, how much more so should somebody who’s a Christian find extraordinary meaning in them?” Levine said.

And as a Jewish historian,  she said, she “can point out meaning that perhaps Christians were not aware of.”

In her new book, Levine walks through several stories Christians typically read during Holy Week, or Passion Week, marking the final days before Jesus was crucified, according to New Testament accounts.

That week also marks the final days of Lent, the penitential season many Christians observe leading up to Easter, when they celebrate Jesus’ resurrection from the dead. For Catholics and many Protestants, Lent began this week. Levine spoke to Religion News Service about Lent and risk and reading the New Testament from Rome, where she recently spent a morning talking to American priests on retreat about “why I think Jesus is wonderful.” In the coming weeks, she plans to present Pope Francis with a copy of the Jewish Annotated New Testament she co-edited.

In your new study, you draw a comparison between Lent in Christianity and the Days of Awe in Judaism. Can you talk about that?

It’s kind of like a theological do-over. And I find that remarkably healthy.

Both in Lent on the Christian calendar and in parts of the Jewish calendar, the community does this together. So you’re not alone in the difficulties of assessing what you’ve done. You’re not alone in trying to figure out how to do life better.

How does delving into the history and literature of Holy Week make the texts more meaningful?

Anybody can read the Bible. You can just pick the text up and say, “What does this text mean to me?” And you make a profound response.

But I do think the more history we know, the more profound the reading experience becomes. In the same way, if you fall in love with somebody, you want to know that person’s background.

If somebody claims to appreciate the stories of the Bible, it seems to me they ought to try to know something about the context in which the Bible was written. If we talk about Jesus teaching in the Temple, which is part of Lenten readings, then it helps to know what the Temple was like. It helps to know that there are Roman soldiers who are in the area. It helps to know that there were pilgrims from all parts of the empire — many of them don’t speak the same language — rejoicing and celebrating this Feast of Freedom, and those are the folks who are listening to these teachings. If we think about Passion Week coming at the same time as Passover, it helps to know what Passover is and how Passover is celebrated. If we read Scripture and Jesus quotes a passage from the shared Scripture — what the church would call the Old Testament and the synagogue would call the Tanakh — it really helps to know what that Scripture is and what comes before and what comes after and how people read that text in the first century.

Is there a particular story in these texts that stands out to you?

I like them all, but I’m very much drawn to the story where, at the beginning of these events, Jesus is at dinner — he eats a lot — and a woman comes in and anoints his head with very expensive ointment, like Chanel. People complain, and they say, “Wait a minute, this is expensive perfume. You could have sold the perfume and given the money to the poor.”

And Jesus says, “You’ll always have the poor with you.” And then we stop because that’s a quote directly out of Deuteronomy, and you know the next line is, “And therefore extend your hand to the poor and the needy.” You always have the chance to do this, but, as Jesus goes on to say, “You will not always have me here, and what she has done is anoint me for my burial.”

And he goes on to say, “This story will be told in memory of her.”

The story is supposed to be told in memory of her, so how do we tell that story? And when we tell it, do we tell it about her? What was she thinking? And later on in the Gospel of Mark, when three women go to the tomb to anoint Jesus’ body, did it not occur to them that this woman had already done that — that she got it right, that she understood what was going on?

Why don’t we have, on the Christian liturgical calendar, a dinner celebrating her? I think that’s the new feast that needs to be invented: We have a special dinner at the beginning of Holy Week and we tell stories about all the women who made this mission possible. How cool would that be?

This study is all about risk. How do you see that theme in the stories of Holy Week?

Jesus knows he’s going to die. You don’t have to be supernaturally prophetic to know that if you go into Jerusalem and you’re a popular leader, that’s going to come to the attention of the powers that be and your life is going to be at stake. So let’s talk about the risk-taking in which he engages, and let’s see how Lent can help us take the risks that we need to take in order to live more complete lives.

We’re happy with the status quo. We know that certain things are wrong, but if we have to risk our reputation or our economic status or our political connections or even our own communities because we’re in favor of something that the community is not, when do we finally make that step and take that risk?

Jesus talks about taking up your cross, which is an extraordinary image. It doesn’t mean, “Oh, I have to take up my cross. I have to pick up the dry cleaning today.” It means, “I’m going to do something where I’m going to risk my reputation, my life, but this is exactly the right thing to do.”

I think Lent helps us with that. We can ask not only what should we have done, but what did we fail to do? When were we too afraid? When were we too self-interested to take the steps that need to be taken in order to do what Jews would call “tikkun olam” — to engage in the reparation of the world?

Some people see the New Testament, and in particular, some of the stories of Holy Week, as anti-Jewish. You also co-edited a Jewish Annotated New Testament. Do you see this in the text, or is that in how these stories have been interpreted?

I think one, as a scholar or as a reader, could pick up parts of the New Testament, like much of the Gospel of John, for example, and say, “This is an anti-Jewish text.” I think that’s a fair reading, but it is not the only reading.

Whenever we read, we interpret, and what’s anti-Jewish to one person is not anti-Jewish to another. I just find it more helpful to say it is certainly the case that over time that many of these texts have been interpreted in an anti-Jewish manner. Therefore, it is our responsibility as moral readers to make sure that we do not inculcate or reinforce anti-Jewish views to people who hear what we have to preach or read what we have to write.

Because reading is often a moral act, what choices do we make when we interpret a text in one way rather than in another way? Do we read benevolently or do we read malevolently? And that’s a choice. I don’t think if you read the New Testament, you are going to come out as an anti-Semite. It’s not a necessary reading, but it’s a possible one.

What do you hope people will take from your study? 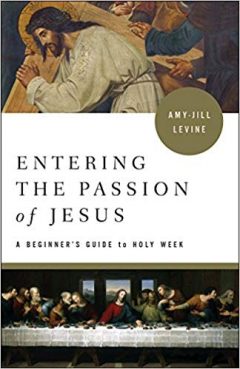 “Entering the Passion of Jesus: A Beginner’s Guide to Holy Week,” by Amy-Jill Levine

Think about Judas Iscariot and what were his motives, because they vary from Gospel to Gospel. Think about how the apostles felt, because, at best, they’re confused. Look at all those minor characters like the woman who anoints Jesus or later the centurion at the cross — what did they think and how were they functioning? Listen to Jesus’ teaching: What does he say about paying taxes? What does he say about the greatest commandment and why?

Each story opens up to so many possibilities — profound, inspirational, often challenging. And I want people to take that challenge, which is in fact to take that risk, to let the stories challenge us and sometimes to indict us.