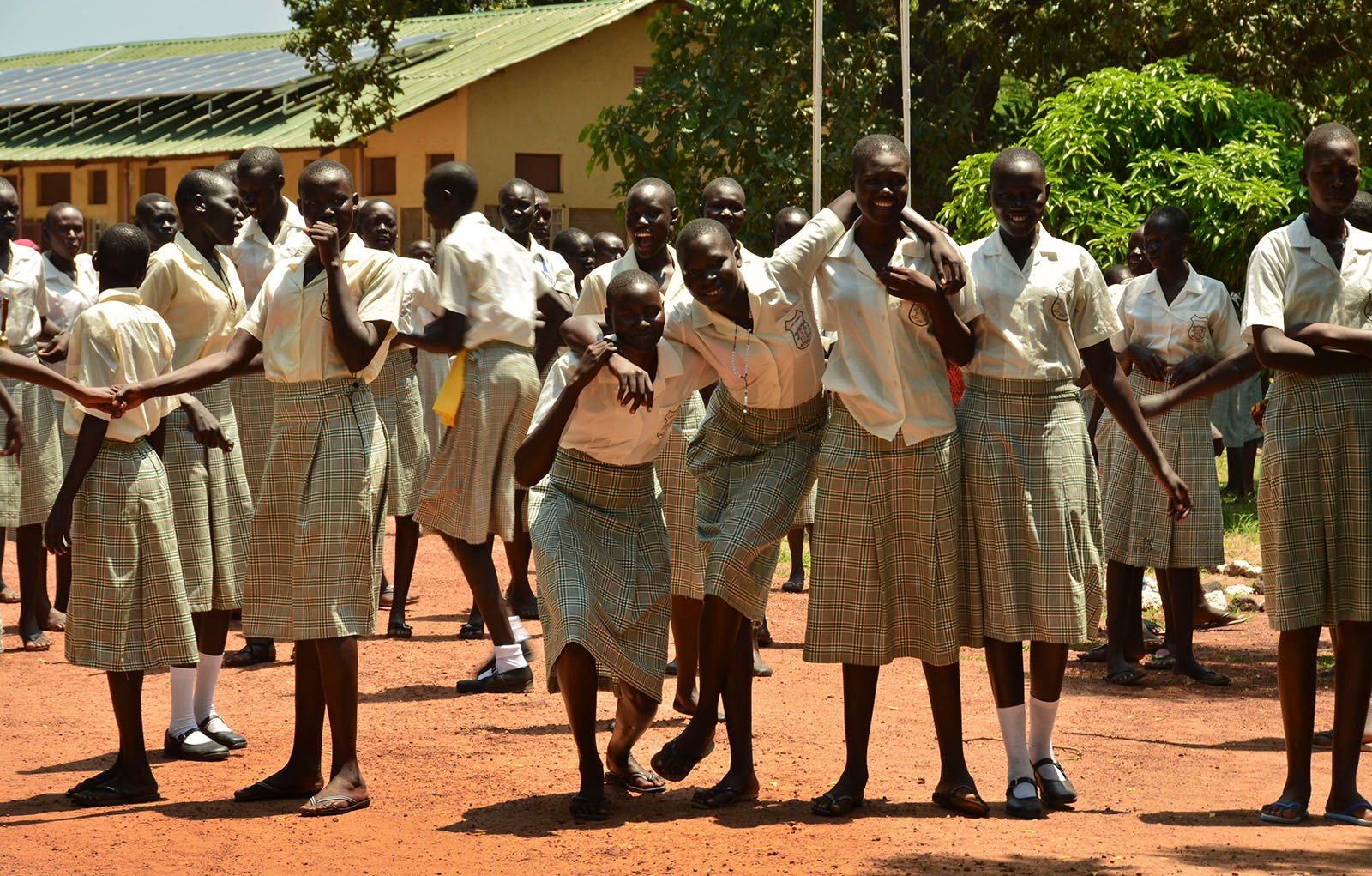 In this photo taken on Jul. 30, 2017, girls take a break at the Irish-run Loreto Secondary School, the region's only all-girls boarding school where staff require each girl's guardian to sign a form promising not to remove the child from school until graduation, in the town of Rumbek, South Sudan. The world's youngest nation is well into its fourth year of civil war, and although child marriage has been a long-standing practice here, the government and aid agencies say the conflict-driven poverty and severe food insecurity are pushing people to desperate extremes. (AP Photo/Mariah Quesada)
March 8, 2019
Fredrick Nzwili

(RNS) — There is a mission school in the heart of South Sudan where girls’ voices and giggles are replacing the frequent cracking of Kalashnikov rifles.

Amid the long-running conflict in Africa’s newest nation, the Loreto Secondary School is thriving in Rumbek, the capital of Western Lake, a state in the center of the country, under the tutelage of four Loreto sisters from Kenya, India and Ireland. Sister Orla Treacy, a 46-year-old Irish nun, is the school’s principal.

Maintaining the school in the shadow of a seemingly unending civil conflict is an act of courage and sacrifice for Sister Treacy, who received a Women of Courage Award for her efforts in Washington, D.C, yesterday (Mar. 7) as part of the State Department's International Women's Day celebration. 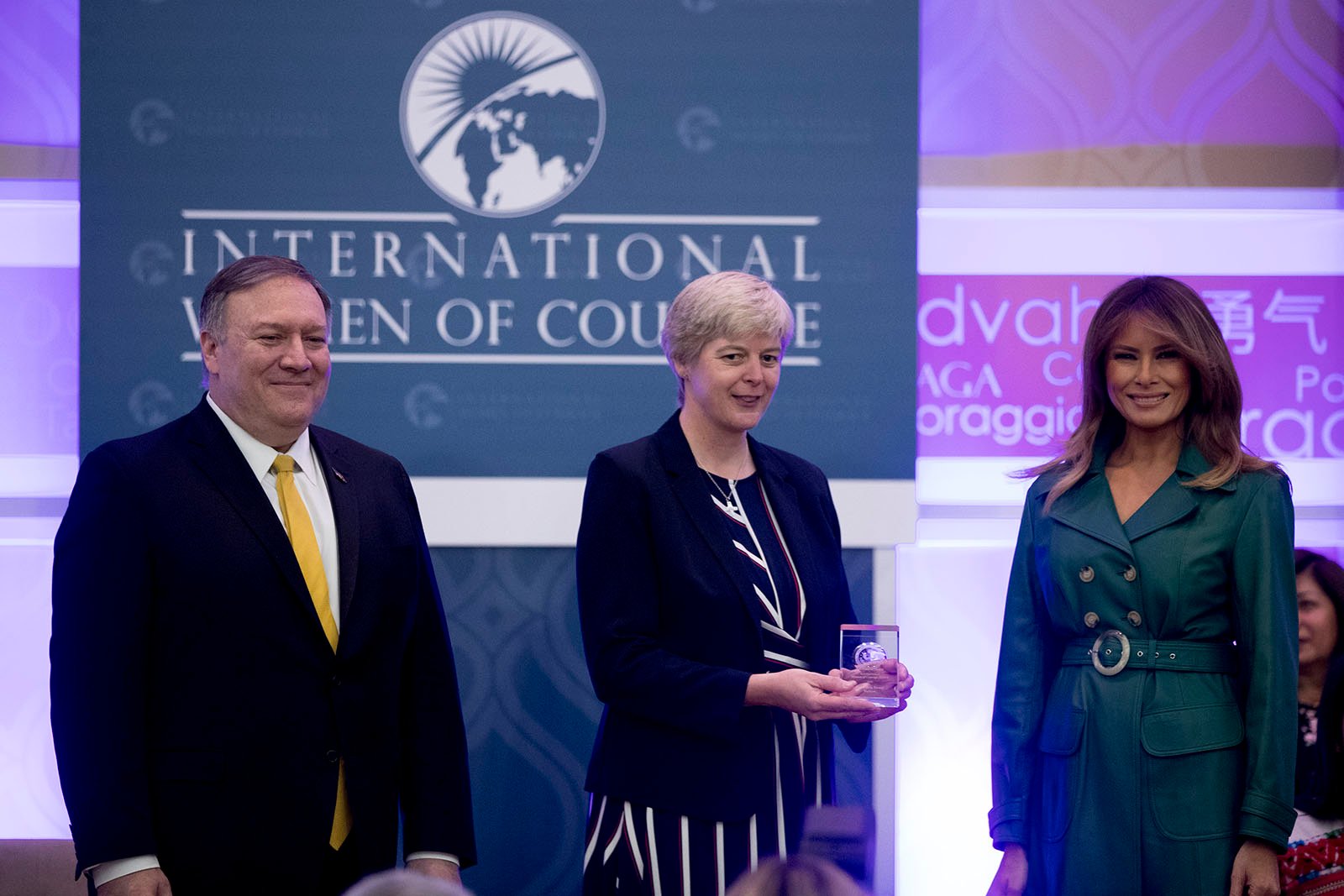 Sister Orla Treacy of Ireland stands with Secretary of State Mike Pompeo and First Lady Melania Trump as she is awarded the 2019 International Women of Courage at the Department of State in Washington, Thurs., Mar. 7, 2019. (AP Photo/Andrew Harnik)

Since 2013, South Sudan has experienced a deadly conflict among different factions, drawing in other African nations to try to broker peace. The conflict has killed nearly half a million people and displaced millions of others. It has frustrated development while conspiring with other challenges such as poverty and culture to lock women and girls out of school.

But Sister Treacy’s school enrolls more than 300 girls from across the country and has become the country's premier boarding school.

Besides the high school for girls, there is a coeducational primary school and a health care unit that focuses on providing services for vulnerable women and children. Without the Loreto schools, many of the students would have already been married off. 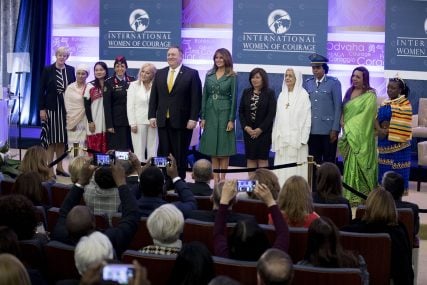 The Women of Courage award recognizes ten women annually from around the globe who have shown leadership, courage, resourcefulness, and willingness to sacrifice for others, especially in promoting women’s rights. Sister Treacy has dedicated her award to the young women of South Sudan.

“Our students embody all that is courageous — they are young women of vision, strength and hope. Young women who dream of a better country for themselves and their families, who are prepared to challenge old structures and work towards making South Sudan great,” Sister Treacy said in a statement ahead of the award.

Born in 1973 in the town of Bray in Wicklow County, Ireland, she joined the Institute of Blessed Virgin Mary, popularly known as Loreto Sisters, at the age of 23.

In 2006, she arrived in South Sudan with four other nuns on an assignment to set up a mission in the town of Rumbek. Two years later, the Loreto school opened to serve Rumbek's expansive Catholic diocese, which had only two other secondary schools.

“We are excited. She is a symbol of exceptional courage for many of us," said Martha Pour, one of the former students who now works as an administrative office assistant at Loreto.

Rev. Augostine Edan Ekeno, the priest in charge of St. Teresa Parish in Rumbek, said the award affirmed the church's role not only in providing education to empower women, but in promoting sustainable development in the fledgling country, which split from Sudan after a prolonged war.

The award "cements the church and its … partners' resolve to lift up women affected by oppressive cultures and social structures,” said Ekeno. “Through the great work done by Sister Orla Treacy, many girls continue to be formed and educated to become (the) agents of change this young nation needs.”

According to the priest, girls in South Sudan are viewed as property and are valued in large part for the bride price they will bring families, paid in cows, sheep, goats and camels.

Sister Treacy “has deconstructed that notion, helping the entire community to start perceiving the girl child as human and with the same dignity as the boy child,” said Ekeno.

Rev. Don Bosco Ochieng Onyalla, a Catholic priest and coordinator for Catholic News Agency for Africa, said Treacy has fought to keep girls in school. “She has on several occasions confronted family members, guardians and those who have attempted to withdraw girls from school with courage and wisdom,” he said.

In one such recent incident, the nun threatened to stop enrolling any girls if the parents of one of the girls withdrew their daughter from the school. The family soon found itself caught in a conflict with authorities who support the school's work.

One of the major challenges Sister Treacy grapples with is finding qualified teachers in a region where U.N. agencies and non-government organizations offer better salaries. Parents, too, struggle to pay the school's tuition.

“It is my hope through this award and recognition the school will pull more supporters and donors interested in promoting the rights of the girl child in South Sudan. More resources are needed to expand the school to accommodate more girls,” said Ekeno.