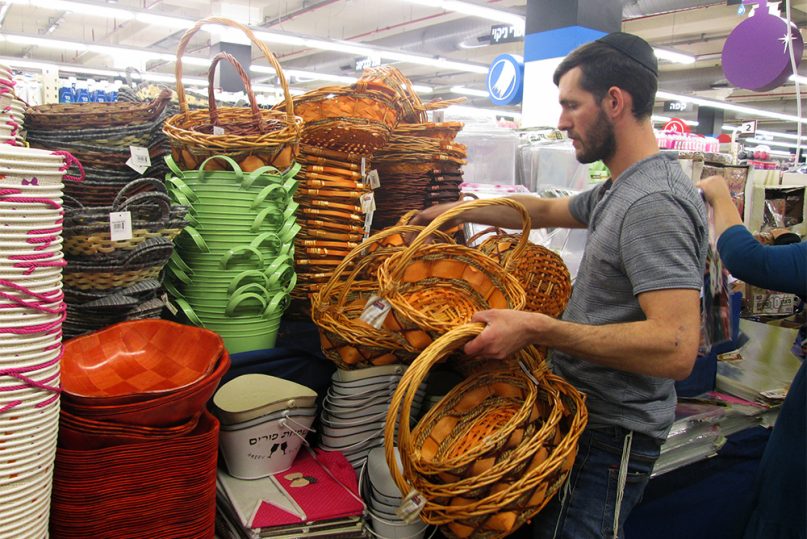 At Purim time, this Jerusalem supermarket devotes entire aisles to the holiday of Purim, when Jews are commanded to give and receive food baskets called mishlo’ach manot. RNS photo by Michele Chabin

JERUSALEM (RNS) — On Purim, a holiday recalling the biblical story of Esther and the Jewish people’s survival against an oppressor, Jews are commanded to donate money to the poor and give and receive mishlo’ach manot — gifts of food and drink.

The holiday begins Wednesday night (March 20) at sundown almost everywhere in the world, but on Thursday night in Jerusalem.

While preparing and delivering mishlo’ach manot is an activity that families look forward to every year, some say this tradition has gotten out of hand in Israel, with stores selling Purim costumes and accessories six weeks before the holiday and tempting people with expensive gift baskets and a dazzling assortment of junk food, containers and gift-wrapping.

“Some people spend a lot of money on mishlo’ach manot, and when that happens other community members may feel they won’t fit in socially if they don’t give something of equal value,” said Ronit Peskin, whose blog, Penniless Parenting, focuses on the challenges facing families.

The commandment, when coupled with peer pressure, “puts pressure on families, especially if they have many children. They need to give to each teacher and to their children’s friends,” the mother of four said.

The key, Peskin said, is not to do away with the mitzvah of mishlo’ach manot.

The key is moderation. 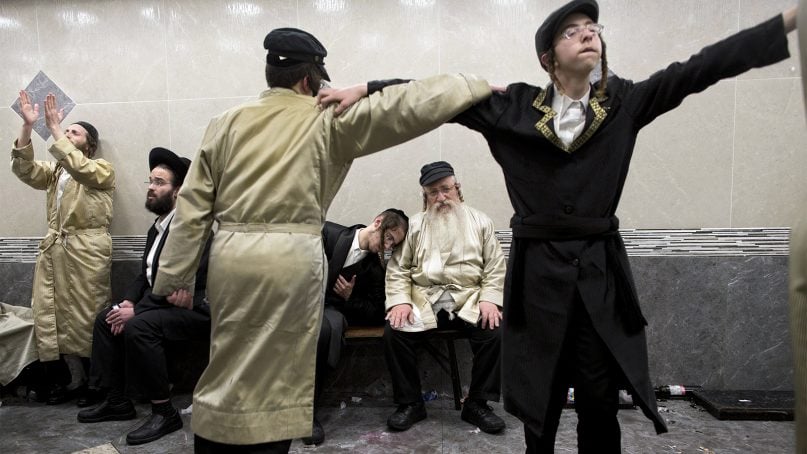 Rabbi Andrew Sacks, director of the Conservative/Masorti movement’s rabbinical assembly in Israel, believes Purim has become much more commercialized and that for some people, alcohol “has become the star of the holiday.”

“It’s like the kiddush clubs at some synagogues, where single malt is served at every kiddush,” Sacks said, referring to the consumption of hard liquor after, and sometimes during, Saturday morning services. “It’s not a good example to set for our young people.”

According to the Shulchan Arukh, the Code of Jewish Law, a person is obligated to drink enough alcohol on Purim to be unable to differentiate between cursing Haman, the villain of Purim, and blessing Mordechai, one of its heroes.

But Jewish leaders have become alarmed by the excessive use of alcohol during the holiday. Ultra-Orthodox rabbis issued a joint statement recently (March 4) on the dangers of becoming drunk on Purim, Israel National News reported.

“From experience, many times drinking leads to murder, such as in cases where a person drives after drinking. This is known to cause many tragedies,” the rabbis wrote.

“Doctors also say that excess drinking, especially among young people, causes damage to the body and brain,” the rabbis noted. 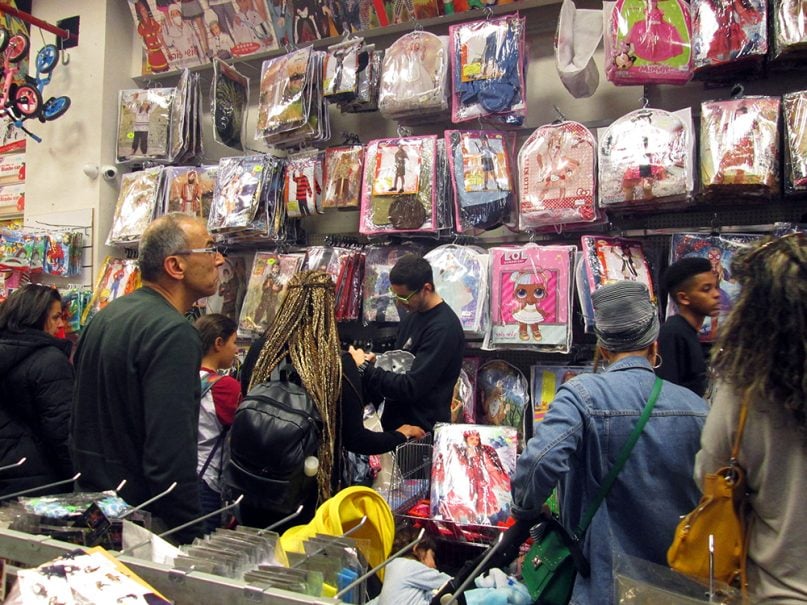 Shoppers pick out Purim costumes for their children at a Jerusalem toy store. RNS photo by Michele Chabin

While the Shulchan Arukh supports Purim-related inebriation, the rabbis wrote, the Mishnah Berurah, another legal text, advises against getting drunk.

“Rather, we are commanded to enjoy (Purim) and be happy out of a love of G-d and thankfulness for the miracles He did for us,” the joint statement said.

Rabbi Peretz Rodman, who heads the Conservative/Masorti movement’s rabbinical court in Israel, said many Jews he knows are turned off by what they consider to be unhealthy Purim trends, from the consumption of sugary foods to the increased use of plastic disposables.

“In Israel we’re seeing a countertrend, with many people giving only a very small mishlo’ach manot accompanied by a note that they’ve given to a charity, often to Leket,” Israel’s national food bank and food rescue organization.

Many Jewish institutions use the holiday to raise funds on behalf of families in need. Thanks to its Purim appeals, Shira Hadasha, a synagogue in Jerusalem, has been able to donate vacations to cancer patients and their families through partnerships with hotels and guesthouses.

Torat Reva Yerushalayim, an outreach organization in Jerusalem, will be preparing 300 food packages for soldiers on duty and for the elderly.

“When we think of our homes and our friends’ homes, with their dining room tables covered with packages for Purim, we must remember that there are people who don’t receive anything at all and would really appreciate a gift delivered with a smile,” Sharona Halickman, the organization’s founder and director, said.

Peskin agrees. She recalled feeling “different and friendless” as a child, especially during Purim, when her peers failed to give her mishlo’ach manot.

When she became an adult, she decided not to scrimp on the commandment.

“I cry for all the people who will never get a sweet morsel at their door,” she said. “I want to make sure no one is forgotten.”