(RNS) — My biggest anxiety in becoming a pastor in the Bible Belt was that I carried some guilt for what I believed was taking the easy road of ministry. I am a pastor in a city where public school football teams pray Christian prayers before games.

I have friends pastoring in cities such as Los Angeles, Las Vegas, and New York City, and here I am, able to drive from my house to Georgia or Alabama in just over 30 minutes. On that drive into the Deep South, I pass more churches than gas stations and restaurants.

Along Southern highways, there are billboards with messages about how to get to heaven and big wooden crosses standing on church properties for all to see as they drive by. The catfish is fried, the biscuits and gravy abundant, and everyone’s grandmothers are pillars in a local church.

Playing football in the Bible Belt all but guarantees that one of your rituals is a prayer before practices and Friday night games. There was never a complaint in our city about a public school having a team prayer or any appeal to “separation of church and state.” We never had a teammate excuse himself from the team prayer. We sang the alma mater, had our pep rallies, and prayed the Lord’s Prayer.

Yet in my four years of high school, I can count on one hand the teammates I had who believed the gospel and followed Christ (at the time). My experience on a high school football team helped me begin to understand life in the Bible Belt, where Christian practices don’t have to be attached to actual Christian beliefs. 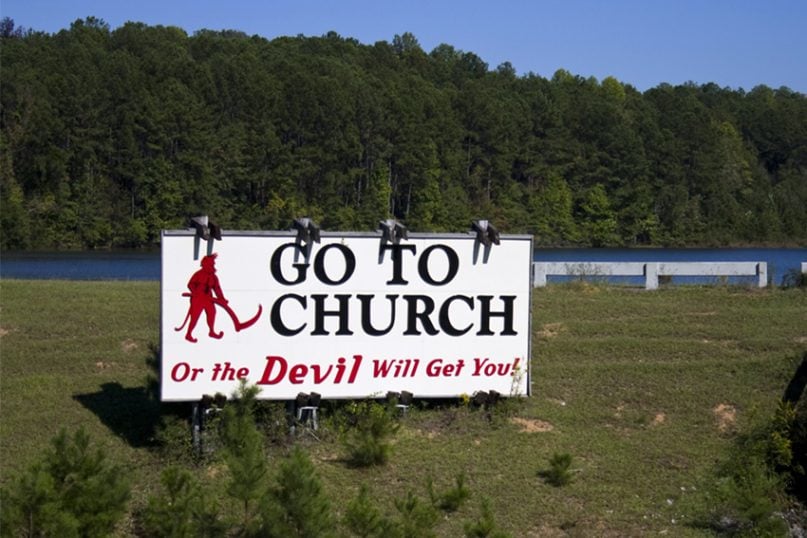 A roadside billboard in Alabama. Photo courtesy of Creative Commons

In the Bible Belt, identifying as a Christian is a way of life, but sadly, believing the gospel and following Jesus are often not. The disconnect is real, but the Christian affiliation is stronger in the Bible Belt than in other expressions of Cultural Christianity, which provides an incredible opportunity for the church in the South to break through and make the gospel known to a region that is saturated with access to the gospel but not true understanding of the gospel.

This realization allowed me to see that the Bible Belt is a mission field where the harvest is abundant and the workers just don’t realize it. To gain an understanding of the mission field of the Bible Belt, one must first understand that it is different from the Cultural Christianity that exists in other areas of the country.

The Bible Belt version of Cultural Christianity can outwardly seem pretty in step with actually following Jesus as Lord. In most cases, there isn’t glaring heretical theology. The people know Bible stories and verses, attend church, can say the Lord’s Prayer from memory, and take pride in identifying as a Christian. It sounds really close to the real thing, because it is an all-consuming part of their lives.

This makes things very complicated and also very urgent for mission, as the differences between “close” and “wrong” have eternally catastrophic consequences.

This reality can be summed up in the remorseful words of Phil Vischer, the creator of the Christian children’s entertainment sensation, VeggieTales, about his work: “I had spent 10 years trying to convince kids to behave Christianly without actually teaching them Christianity.” 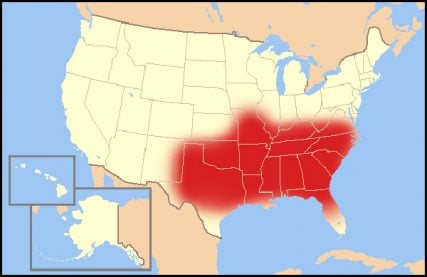 The Bible Belt commonly refers to this area of the U.S. Map courtesy of Creative Commons

It is certainly easy to confuse morality with the gospel, but this is a mistake the church can no longer afford to overlook. Who would have thought that VeggieTales wasn’t teaching children Christianity? The founder, apparently, who realized the disconnect between moralism (depicted through Bible stories) and actually believing the gospel and following Christ.

Christianity as merely a family tradition only requires maintaining the tradition. It is done through family prayer and sitting together at holiday church services. You don’t need the gospel or its power to maintain religious traditions. The reality of God is ever-present, haunting many Southerners, but not in a manner that leads to change.

The disconnect lies in the difference between believing in a person named Jesus Christ and actually being “in Christ.” It is in Christ that one is a new creation, Paul wrote in 2 Corinthians.

What does it mean to be “in Christ”? Martin Luther stated, “Christ and I must be so closely attached that He lives in me and I in Him.” This only happens through our union with Christ that takes place in salvation, as to be united to Christ is what it means to be saved. Cultural Christians in the Bible Belt (and elsewhere) need to understand that believing Jesus existed is not the same as actually knowing Jesus and being in Christ.

Sadly, many people in the Bible Belt are haunted by the idea of Christ, while not understanding His love for them. The judgment of God lingers in their minds. Believing the gospel would allow them to understand that it is the kindness of God that can actually lead them to repentance (Rom. 2:4).

With an awareness of God and our sins, but not the gospel, one is left with only country music theology, hoping God will let us into heaven one day after we have some fun on earth. It is ironic that a faith practiced apart from repentance is one that actually won’t experience freedom. It is always looking over its shoulder, when it instead could be surrendered to the God who pursues and saves.

The disconnect is real and the door wide open to point people to something better that loves rather than haunts. An understanding of this good news will lead people to finally say, “Jesus, here’s my life.”

(Dean Inserra is the founding and lead pastor of CITYCHURCH in Tallahassee, Fla. This commentary is adapted from his book, “The Unsaved Christian: Reaching Cultural Christianity with the Gospel” and used by permission. The views expressed in this commentary do not necessarily represent those of Religion News Service.)

Opinion
What evangelical men can learn from Amy Grant and Annie F. Downs