WASHINGTON (RNS) — Archbishop Wilton Gregory of Atlanta has been tapped to head the influential Archdiocese of Washington, filling a slot left vacant in October after its previous archbishop, Cardinal Donald Wuerl, was accused of mishandling cases of sexual abuse by priests during his time in Pittsburgh.

Gregory had been widely expected to fill Wuerl’s seat since March 28, when Catholic News Agency reported that unnamed sources in Rome were already listing him as the successor.

The appointment appears geared toward setting a new tone of accountability on the revived sexual abuse crisis that has roiled the church since last year. As president of the U.S. Conference of Catholic Bishops from 2001 to 2004, Gregory helped navigate the church’s response to the 2002 sexual abuse scandals and oversaw the formation and implementation of new policies and norms to address it, such as the “Dallas Charter” and the USCCB’s “Essential Norms.” He also participated in a working group tasked with formulating reforms for holding high-level clerics accountable.

“Archbishop Gregory will be able to identify with, and compassionately serve all of the people of this archdiocese, who represent very diverse ethnic, cultural and social backgrounds,” Bishop Roy E. Campbell, an auxiliary bishop in Washington and a fellow member of the Black Catholic Bishops of the United States, in a statement. “I look forward to working closely with him in his ministry of leading and healing all who make up this Church and this community.”

The Rev. Raymond Kemp, a priest in Washington who also serves as special assistant to the president of Georgetown University, was also exuberant about Gregory’s appointment.

“It’s a reason to break a Lenten fast and pour a drink, because it’s great news for the Archdiocese of Washington, which has been mired a bit in all kinds of stuff,” he said.

Gregory is expected to offer the Washington Archdiocese a stability it has not had since June of last year, when then-Cardinal Theodore McCarrick, who led the archdiocese from 2001 to 2006 before retiring, was accused of sexually abusing a teenager 45 years prior, as well as other instances of sexual misconduct with adult seminarians. 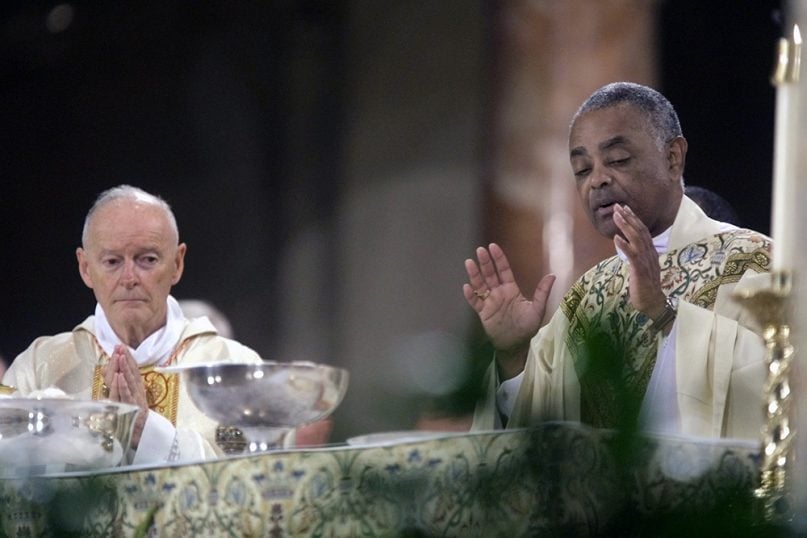 The Rev. Wilton Gregory of Belleville, Ill., then-president of the U.S. Conference of Catholic Bishops, right, accompanied by Washington Cardinal Theodore McCarrick, presides over a Mass at the Basilica of the National Shrine of the Immaculate Conception in Washington on Sept. 11, 2002, during the U.S. Bishops National Memorial Mass on the first anniversary of the terrorist attacks. Gregory will be taking over McCarrick’s former position. (AP Photo/Terry Ashe)

After a Vatican investigation, McCarrick was pulled from ministry and stripped of his cardinal’s rank, but the controversy soon took on a new form: Former papal nuncio Archbishop Carlo Maria Viganò alleged in a letter that two popes — Benedict XVI and Francis — had known about at least some of the accusations against McCarrick.

Meanwhile, McCarrick’s successor, Wuerl, was named in an exhaustive Pennsylvania grand jury report on sex abuse in the church, with the authors alleging that he had mishandled sexual abuse cases while serving as bishop of Pittsburgh.

Wuerl, while pushing the Vatican to take a tougher stance on child sex abuse, initially defended his record and rebutted some of the report’s claims, but Francis eventually accepted his resignation in October 2018.

Kemp said Gregory’s experience with diverse populations in Atlanta will pay dividends when navigating Washington’s multicultural nature. “We’ve got an archdiocese that’s filled with people of color from all over the world,” Kemp said. Gregory’s job “is to reach out to to the 140 parishes of every conceivable race and background and say, ‘Jesus is looking out for all kinds of folks.'”

According to the Catholic News Agency, Gregory converted to Catholicism while attending a Catholic grade school in Chicago and was ordained a priest in the city in 1971. He was elevated to bishop at age 36, serving as an auxiliary in Chicago to Cardinal Joseph Bernardin from 1983 until 1994 before becoming bishop of Belleville, Ill., where he remained from 1994 to 2004.

Having served since then in Atlanta, where the archdiocese has grown to approximately 1.2 million Catholics, according to its website, Gregory will take a step down in terms of population: The Archdiocese of Washington claims to oversee about 655,000 Catholics. It is a significant elevation in terms of visibility, however, as the position is known for attracting national attention, influence and scrutiny.

Kemp noted that the new archbishop will have to navigate elements unique to the Washington Archdiocese, such as dealing with the international community and diplomats and handling multiple branches of government.

He also noted that political rhetoric carries significant weight in the city, especially with Pope Francis appearing to criticize President Trump’s policies as recently as last week: Asked about politicians closing borders — as Trump recently suggested — the pontiff said leaders who do “will become prisoners of the walls that they build.”

“I can’t think of a better person to carry that message down 16th Street than Archbishop Gregory,” Kemp said.