(RNS) — The future of a decades-old CBS documentary series focused on religion is in doubt, as the network is potentially discussing cutting back or even ending a stream of faith-related segments that CBS has run since the 1940s.

“I’m deeply disappointed. This is, in my opinion, the best programming devoted to religion on broadcast television.” 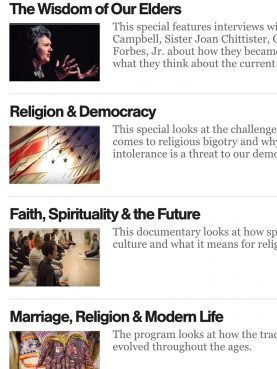 A source familiar with the programming told RNS that CBS is approaching religion reporting differently in the future. The source said the network is not cutting faith-related content in general, and plans to produce a Christmas special this December.

CBS Religion and Culture ran on a contract basis for years under the leadership of John P. “Jack” Blessington, who retired in the past year, and is produced by Liz Kineke. Both declined to comment.

CBS declined to comment on the future of the long-running program, which is produced out of the CBS Corporation, not specifically the network’s news division.

In its most recent form, CBS Religion and Culture produced four documentaries a year and an annual Christmas special. In March, “Deconstructing My Religion,” a documentary about people who doubt the faith in which they were raised, won a Wilbur award for excellence in communicating religious issues, values and themes.

CBS Religion and Culture was developed at CBS in 1948 and has produced a wide range of programming on American religion ever since. The show’s diverse undertakings included in-depth coverage of religious responses to the 1990s AIDS epidemic, faith groups confronting white supremacy and shows on interfaith cooperation. According to the United Methodist News Service, the project began working in 1989 with members of the Interfaith Broadcasting Commission to develop programming.

“We live in a time now where it’s as clear as ever that religion is at the center of so many critical national stories,” Singh said. “CBS Religion and Culture has shown through its recent programming that they are both ahead of the curve and able to go into depth on some of the stories that matter most, including issues like climate change and white supremacy and the changing landscape of religion in America.”

Although it is unclear how CBS will handle faith-related content moving forward, the potential end of the program comes at a time when religion reporting appears to be shrinking after a short period of growth.

The New York Times, which claimed two full-time national religion reporters for roughly a year, now only has one. Digital-only outlet BuzzFeed recently laid off its Islam reporter, Vox.com has not refilled a position previously dedicated exclusively to religion, and Jewish publication The Forward announced in January it will be ending its print edition and laying off about 40 percent of its staff.

Anthea Butler, graduate chair and associate professor of religious studies at the University of Pennsylvania, said this trend could have dire repercussions for religion news.

“We don’t have enough people doing this, and we have a real problem,” she said. “And it’s only going to increase: religion isn’t going away.”

Butler also argued that religion reporting is often not given adequate attention or promotion by outlets.

“(CBS Religion and Culture) was not something that was ever publicized in ways that could have given it traction,” Butler said. She later added: “The kind of religious program that we used to have on TV doesn’t exist anymore, because it’s all taken up by evangelists and prosperity gospel (productions).”