(RNS) — Almost 60 years ago, on the evening after his midday announcement that he was running for president, Sen. John Kennedy was depressed. According to his friend and biographer Arthur Schlesinger Jr., Kennedy was worried that, in the face of stiff Protestant anti-Catholic bigotry, he might have lost his bid for the White House on the day he was baptized as an infant in the Catholic Church.

A half-century later, Sen. Barack Obama faced a double-barreled crisis about his religious background. Many right-wingers, including Donald Trump, were promoting the lie that Obama was Muslim, even as an increasingly shrill chorus was deriding the future president’s relationship to his former minister, the Rev. Jeremiah Wright, pastor of Trinity United Church of Christ in Chicago, a legendary African-American clergyman known for his fiery, controversial preaching.

Both candidates acted aggressively to address their very different conundrums. Kennedy turned the tide of his race with a dramatic speech to the Greater Houston Ministerial Association, mollifying Protestant clergy. Obama, too, made a dramatic speech detailing his differences with Wright and distancing himself from the preacher. Behind the scenes, both candidates hired religious outreach teams that helped blunt the efforts of various organized entities bent on weaponizing religion against them.

The next president of the United States may well be the woman or man among the current Democratic cavalcade who figures out the best strategy for addressing the complexities of religion today. With the exceptions of Kennedy and Obama, most Democratic presidential candidates over the last 60 years proceeded as if religion didn’t matter. We think that would be a big mistake in 2020.

We find it interesting that several Democratic candidates have already signaled, through personal narratives and policy prescriptions, that they have real assets with religious constituencies. The question remains if these early signals will be matched with coherent strategies, or remain merely tantalizing ad hoc episodes.

We believe Democratic outreach to religiously motivated voters will be especially crucial at two points in the 2020 election cycle: early in the primaries and at the end of the general election season, especially in swing states in a tight Electoral College race.

In 2016, more than 170,000 Iowans turned out for the Democratic caucus and there is every reason to believe 2020’s highly motivated Democratic base will yield an even higher turnout come February. With as many as 20 candidates roaming the state looking for support, a few hundred votes might separate the winner from second place. Few will care about the photo finish the day after the caucus; what will matter is who won. A Democrat with a sophisticated religious outreach strategy might find enough new voters to secure the winning margin.

In the last general election, Hillary Clinton lost to Trump in the Electoral College by a handful of states by close popular votes. Had she flipped around 40,000 votes, properly distributed across Wisconsin, Michigan and Pennsylvania, she would have won the White House. These states harbor enough persuadable religiously motivated voters to have closed that narrow gap. By neglecting to develop a strategy to reach them with her case for rejecting the deeply flawed Trump candidacy, she lost. 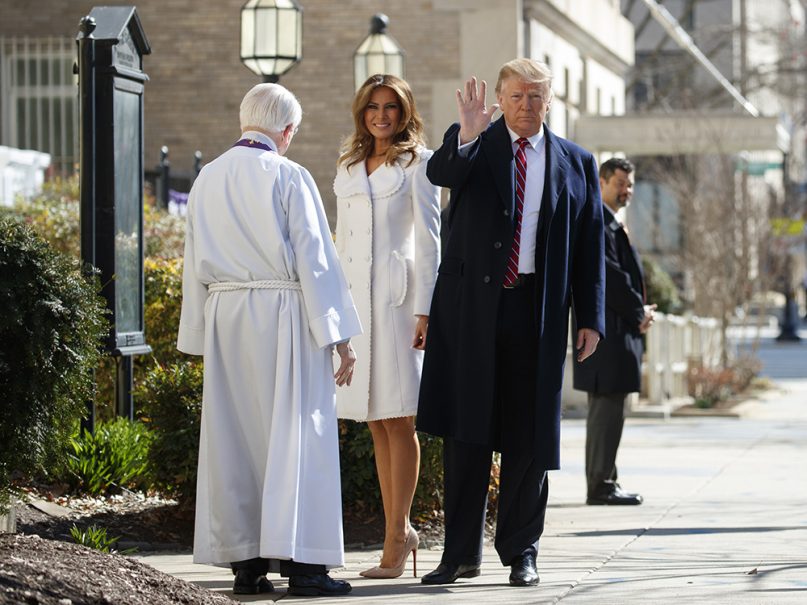 President Trump, with first lady Melania Trump and the Rev. Bruce McPherson, waves as he arrives to attend service at St. John’s Church in Washington on March 17, 2019. (AP Photo/Carolyn Kaster)

In 2020, we believe a strategy to reach a diverse group of voters whose decisions are shaped by their faith will have to be part of a winning strategy in these states, plus Ohio and Florida.

What are the key elements of such a strategy? First, history suggests there has to be buy-in from the top of the ticket. Both Kennedy and Obama were smart enough to know what they didn’t know and hired smart people to build a strategy, then devoted real resources to those efforts. This is especially crucial given the natural skepticism and inexperience among Democratic campaign professionals in addressing religion.

Next, candidates should resist a Noah’s Ark strategy. This is a lowest-common-denominator “values language” approach where everyone is at every table. This is a fear-based strategy that avoids seriously grappling with the incredible diversity of America’s religious landscape. The campaigns can’t be afraid to show up in specific religious communities — including those beyond well-known ones — and speak in an intelligible idiom to each of them. Kennedy and Obama demonstrated an ability to listen to what religious communities had to say about what they believed America needed. After spending time really listening in religious communities, the campaigns need to connect their policy positions to what the candidates have heard. Anything less is ineffective.

Further, a successful campaign must design a sophisticated digital strategy. As of today, to put it bluntly, the Democratic Party’s capacity to reach diverse faith groups digitally is nonexistent. To pursue religion-focused Americans without the right data and messaging tools is simply wishful thinking.

The upcoming election cycle is a huge opportunity to gain ground on Trump in just about every religious sector in America. With his Muslim ban, his valorization of white supremacists, and his turning away of people fleeing persecution and seeking asylum and internment of children at our Southern border, Trump has directly assaulted and repudiated many of the most deeply held religious beliefs of a vast number of Americans. This includes his white evangelical base, to say nothing about Catholics, mainline Protestants, historically black churches, Jews, Muslims and others.

Neither Kennedy nor Obama could have fully anticipated the perils and opportunities of the religious issues they ultimately faced, but they responded with wisdom and political dexterity. Democrats would do well to examine their examples in the current effort to unite the nation against the moral peril presented by the Trump administration.

(Shaun Casey teaches at Georgetown University and is a former special representative for religion and global affairs at the U.S. Department of State. Michael McCurry teaches at Wesley Theological Seminary and was White House press secretary in the Clinton White House. The views expressed in this commentary do not necessarily represent those of Religion News Service.)