(RNS) — Last week, my social media feed became inundated with the news of yet another shooting. But this time, it struck closer to home than ever before: Chabad of Poway, a synagogue where a white supremacist gunman had killed a woman while injuring the rabbi and two other congregants, was practically my neighbor in the suburb of San Diego.

Then, as the details came out, the sad event hit much closer. The suspect, 19-year-old John T. Earnest, was a member of a church I was very familiar with, the Escondido Orthodox Presbyterian Church, and had reportedly written a Bible-verse-filled “manifesto” before committing his evil act.

I had attended Escondido Orthodox Presbyterian for a year while studying at Westminster Seminary California. I knew the pastor and his family. Several of the faculty were members of the church, which meets in the seminary’s chapel. I had friends who had been a part of that church at one point in their lives.

In fairness and charity, I can’t place the blame for this shooting on anyone other than the shooter. I don’t have enough information to say whether or not his family and church did all they could have done to prevent this evil from happening. But, I can pose a different question that we need to humbly ask ourselves: Have we as a whole done what we can to disciple people within our Presbyterian and Reformed tradition churches to confront racism and white supremacy? Recent books such as Jemar Tisby’s “The Color of Compromise” highlight that there is incontrovertible proof that theologically conservative Christians historically created, protected and benefited from racially unjust practices and ideologies. Research has shown how the Reformed tradition in the United States has a dark history of defending slaveholding and advocating for segregation in our churches and Christian schools.

Princeton Theological Seminary, once the flagship institution of the Reformed tradition in the United States, has a well-documented history of employing faculty members who ardently defended slaveholding in their teaching and ministry and took significant donations from slave-related enterprises.

One of these faculty members, J. Gresham Machen, who went on to found the OPC and Westminster Theological Seminary, brought complaints to his fellow faculty members when a black student was assigned to live in seminary dormitories with white students.

Other writers, such as Michael O. Emerson and Christian Smith, in “Divided By Faith: Evangelical Religion and the Problem of Race in America”, show how racism and white supremacy are a present reality in the church. The experience of many people of color in Reformed churches can further attest that our churches are no exception.

Within our churches, there is a general pushback against charging Christians with dismantling racism. The fear of white supremacy is considered to be overblown, and talking about racism is equated with progressive theology outside of the bounds of Christian orthodoxy. We’ve failed to combat white supremacy with the urgency and seriousness it deserves.

In practical terms, our pulpits and Bible study groups have not done a sufficient job at proactively showing and telling that racism and white supremacy are incompatible with the gospel. Our churches have spent so much time worrying about the purity of how to talk about the gospel that we’ve been anemic at discipling Christians in the purity of how to walk in step with that gospel. 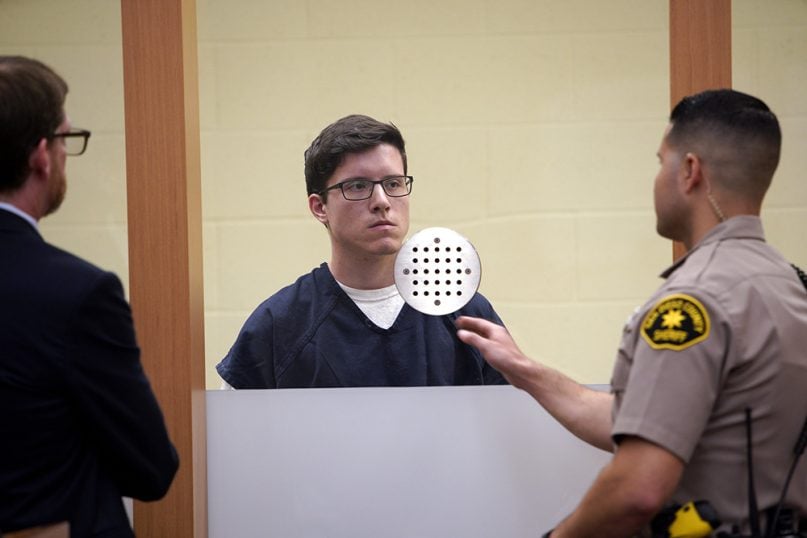 John T. Earnest, center, appears for his arraignment hearing on April 30, 2019, in San Diego. Earnest faces charges of murder and attempted murder in the April 27 assault on the Chabad of Poway synagogue, which killed one woman and injured others. (Nelvin C. Cepeda/The San Diego Union-Tribune via AP, Pool)

Too often, as a result, our churches are safe spaces for people like John T. Earnest. People remain perfectly comfortable holding and acting out white supremacist views while attending our churches. We need to be honest that our tradition has not done enough to provide a clear and resounding message that makes a white supremacist stop dead in his or her tracks and consider whom to follow this day – Jesus or whiteness.

Now that the news has spread, will we publicly acknowledge that the shooter was a member of one of our churches, or will we try to hide that fact?

Will we say, yes, this was a member in our covenant community who sat in our pews, participated in the life of our church? Are we going to admit that we have not talked enough about racism in our churches rather than risk talking about it too much?

Today, I pray for Chabad of Poway and my Jewish friends, neighbors and communities around the nation. I pray for all places of worship that can’t help but fear now that no house of worship is sacred or safe. I pray for Escondido OPC and the Earnest family. I pray for Christians of color who sit in the pews fearing if white supremacy will enter their church doors or even turn toward them from the pew in front of them.

I pray that Christians in my tradition will now see the seriousness of racism and white supremacy and that we would proactively disciple our people against these demonic, anti-gospel ideologies. I pray that those who have the seeds of white supremacy and racism in their hearts within our churches today will be confronted by the truth of the gospel and will repent and follow Jesus in all that it entails.

(Timothy Isaiah Cho is an assistant editor at Faithfully magazine. The views expressed in this commentary do not necessarily represent those of Religion News Service.)

News
How Black people and Jews are bound together in ‘great replacement’ theory
Follow us on Facebook!
Submit your photos to RNS