But Ortega’s many homemaking skills belie the harsh reality of her life: She cannot go home.

Later this month, Ortega will mark her two-year anniversary in sanctuary. The 47-year-old Guatemalan native took refuge at St. Barnabas on May 31, 2017, after receiving an ankle bracelet and an order of deportation.

On Thursday (May 9), some PBS stations across the country will air a 25-minute documentary titled “Santuario” that tells Ortega’s story. The film looks at the plight of the Ortega family after Juana left  her husband, Carlos, four children and two grandchildren for sanctuary. The directors hope the film shines a light on noncriminal deportation cases like Ortega’s, which have multiplied in the wake of the Trump administration’s immigration crackdown.

Ortega, who has no criminal record, has lived in the United States for 26 years, most of them in the North Carolina town of Asheboro, about 30 miles from Greensboro.

Before taking sanctuary, she worked as a seamstress for a furniture company in nearby High Point. Six years ago during a raid on her employer, she was arrested for entering the country illegally and released. It was then she first realized her asylum claim was denied. Each year since, she checked in with U.S. Immigration and Customs Enforcement and received a one-year stay of deportation – until in 2017, when for no stated reason she was given 30 days to leave the country. 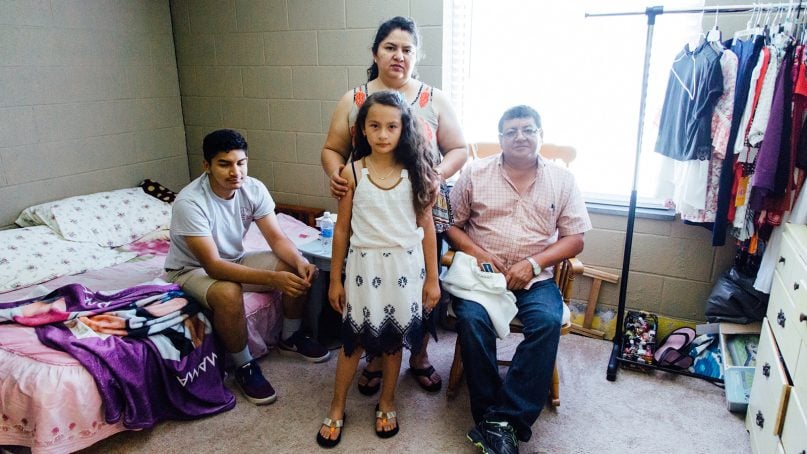 Faced with the choice of leaving her family and going back to Guatemala, or awaiting a knock at the door from an ICE officer, she sought church sanctuary.

Ortega’s family visits her at the church every weekend. Her two granddaughters often stay with her during school vacations. But for all practical purposes, her life is on hold.

“I came into the project excited about the idea of sanctuary as a form of protection for people facing deportation,” said Christine Delp, who co-directed the film with Pilar Timpane. “And I came through not really sure whether sanctuary is a good or bad thing. It’s like being in limbo. There’s an extreme emotional, financial, physical toll on families.” 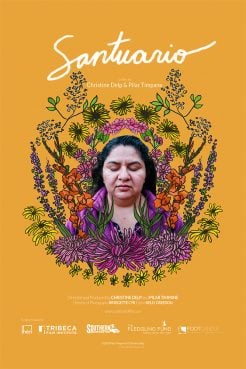 Hundreds of congregations across the country have pledged to support undocumented people at imminent risk of deportation. A far smaller number have actually housed them.

There are now 48 people taking sanctuary in houses of worship across the U.S., according to Church World Service, which maintains a database. Three have been in sanctuary since 2016, when the most recent sanctuary movement began, and 21 are coming up on their second anniversary.

Houses of worship are considered “sensitive locations,” meaning that federal immigration enforcement officers will avoid arresting, searching or interviewing people there under most circumstances.

The congregations that have people living in sanctuary have worked hard to advocate on their behalf.

So far, they’ve had limited success.

Some people in sanctuary have successfully won a stay of removal and have been reunited with their families. (One woman formerly in sanctuary at another Greensboro church was granted a green card last week, entitling her to permanent residency.)

But the majority are still waiting.

Timpane, co-director of the documentary about Ortega, which has shown at 11 film festivals and won the grand jury prize for short documentary at the New Orleans Film Festival, said she still struggles with people’s misunderstandings about the immigration system.

“It continues to surprise that we get questions like ‘What did she do? Why is (she) getting a deportation sentence?’ — rather than ‘What can be done to change the system?’” Timpane said. 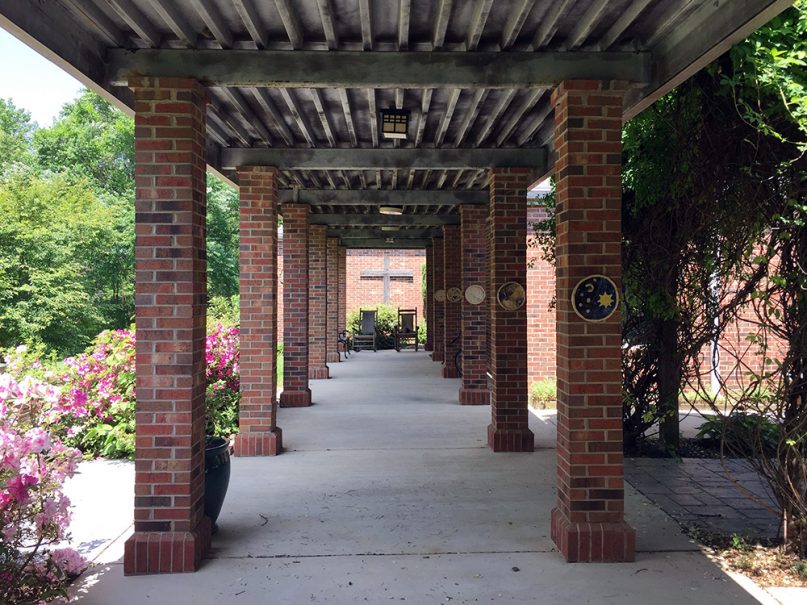 St. Barnabas, North Carolina’s first congregation in recent history to offer sanctuary to an undocumented immigrant, took in Ortega knowing her stay would be indefinite, but feeling called nonetheless to help her.

To keep her safe, it instituted new rules: The church doors remain locked. A volunteer is on duty 24 hours a day. And no immigration enforcement officers are allowed on the premises without an arrest warrant signed by a judge.

The church turned a vesting room and storage area into a bedroom and sitting area for Ortega. Her son-in-law, a plumber, installed a shower in one of the church bathrooms.

Besides sheltering her, church members revved up their advocacy on Ortega’s behalf. They’ve written letters, made phone calls, visited Congress to push for an immigration policy that keeps undocumented families together and allows a path to citizenship. Failing that, they have raised the possibility of a private bill that might allow Ortega a stay of deportation.

The church was buoyed by last year’s midterm elections when Democrats took control of the House of Representatives — including the House Judiciary Committee, and Subcommittee on Immigration and Citizenship. A church group drove to Washington to visit with Rep. Jerry Nadler, the committee chair, taking some of Ortega’s pottery as a gift. The group also visited with Sen. Thom Tillis, one of North Carolina’s two Republican senators. 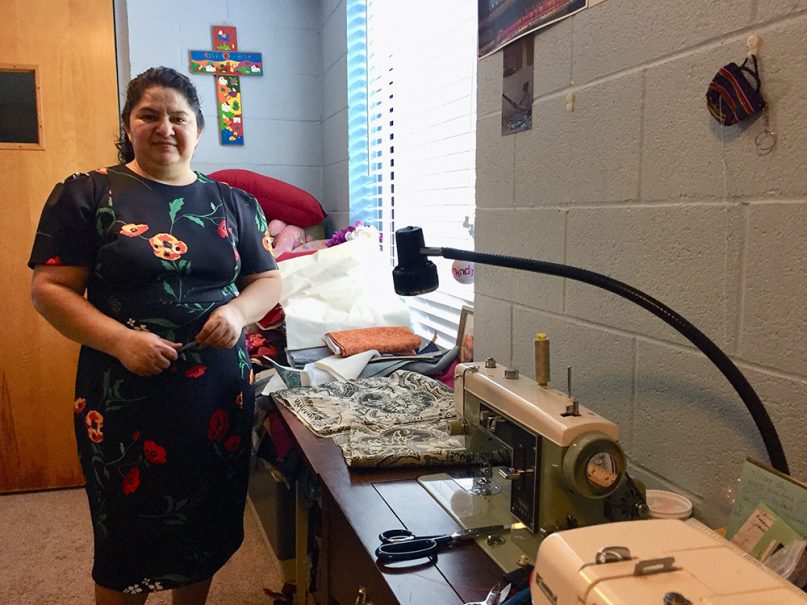 Juana Luz Tobar Ortega with some of her sewing machines at St. Barnabas Episcopal Church in Greensboro, N.C. RNS photo by Yonat Shimron

But so far, there’s been little movement on immigration.

The Rev. Randall Keeney, the church vicar, said he’s become disillusioned by the nation’s politics that have failed so many undocumented people.

“I used to think our representatives acted out of conscience,” he said. “I don’t believe that anymore. I think they only act out of expediency and for political reasons.”

Last year, the ankle bracelet that ICE strapped around Ortega’s leg broke. The church, which has been upfront with ICE about her whereabouts, called the agency to inform officials about it. ICE offered to fit her with a new bracelet.

The church said no.

This weekend, Ortega’s third child, Jackeline, will graduate from a community college with a degree in animal science. Ortega won’t be there to cheer her on when she accepts her diploma.

Her youngest, Carlos Jr., whom she lovingly calls Carlito, is a high school junior. Ortega tears up at the thought that she might miss his high school graduation next year.

Then she wipes away the tears and reminds herself why she chose sanctuary.

“It’s better for me to stay here,” she said. “Here I have my family. If I went back (to Guatemala) we’d be separated.”

Jackeline, Carlos and Carlos Jr. are U.S. citizens, while Ortega’s two older daughters, born in Guatemala, have qualified for the Deferred Action for Childhood Arrivals program.

“It’s hard for us,” said her eldest daughter, Lesvi Molina, who stays with her one night a week. “But it’s nothing compared to what she’s dealing with. It’s very overwhelming to feel like there’s no way out.”

News
Faith-based agencies celebrate ‘return to moral leadership’ as Biden raises refugee ceiling to 125,000
Follow us on Facebook!
Submit your photos to RNS