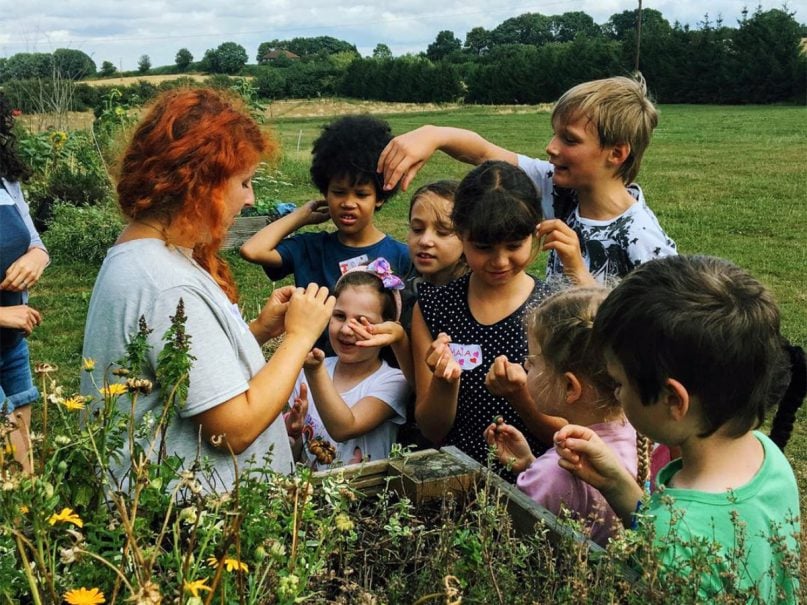 (RNS) — In the largely rural society of biblical times, the people of Israel would celebrate Shavuot by bringing to the Temple the bikkurim, or first fruits, for which Israel was then known — wheat, barley, grapes, figs, pomegranates, olives and dates. The oxen carrying the baskets for the festival, which marks both the wheat harvest and the moment God gave Israel the Jewish law, would be garlanded with flowers and there would be processions and music.

In the Jewish Diaspora’s mostly urban communities today, parades of oxen are rare. But in a corner of rural Britain, Jewish farmers who are attempting to reconnect Judaism with its agricultural roots will celebrate Shavuot with an eye to ancient traditions.

“When we were exiled from the land of Israel, we forgot about where we came from,” said the farm’s founder, Talia Chain. “We focused on law books and the city. But we need that relationship with the soil, to make sense of our religion again. We need an earth-based Judaism.” Participants at the Sadeh farm at Skeet Hill outside of London. Courtesy photo

Though she knew nothing about gardening, much less farming, while growing up, Chain was a passionate environmentalist before establishing Sadeh, the farm in Kent, just beyond London’s farthest suburbs. She still combines her farming with activism as a member of Extinction Rebellion Jews, part of the wider Extinction Rebellion movement whose protests to highlight climate change brought London to a standstill in recent weeks.

Her journey to Sadeh — “field” in Hebrew — also incorporated her return to the Orthodox Judaism of her childhood. After graduating from University College London with a degree in classics and several years spent working in fashion, Chain took off to the United States. While there she encountered “The Omnivore’s Dilemma,” New Yorker writer Michael Pollan’s best-selling examination of where our meals come from.

Inspired to do her own research, Chain applied for an Adamah Jewish Farming fellowship at the Isabella Freedman Retreat Center in Connecticut, a 400-acre facility dedicated to spiritual and environmental awareness that runs its own farm. In Connecticut, and in subsequent farming courses she took, Chain became savvy about growing food, milking goats and tending chickens. As she rediscovered her faith, she realized it had far more connections with the environment than she had previously understood. For a member of a generation that is so passionate about the future of the planet, this was a revelation.

“We are not separate from the land,” she said. “It is a connection with the divine. But we have grown apart from it, and I didn’t understand that principle of care.”

Returning to Britain in 2016, she sought a place where she could pursue both her faith and farming. Chain came across Skeet Hill House, a Jewish retreat center founded by the Jewish Youth Fund during the Second World War to give Jewish children from London respite from the Blitz. Armed with her new farming skills and a fair amount of chutzpah, she persuaded the trustees to let her take over a few scrubby acres surrounding the house to create the only farm in Britain that combines agriculture with Jewish tradition.

With its warm climate and fertile soil, Kent is known for its beer and fruit and at Sadeh the workers focus on both. Hops are being grown and the next project is to build a fermentation shed to brew beer from the home-grown hops.

Chain planted apple, plum, pear and apricot trees soon after her arrival, but despite the fruit that has appeared in the past two summers, she has held off harvesting it, honoring Jewish law that decrees that for the first three years of its life, fruit isn’t picked from the tree. The law says that the fourth harvest is given to the temple, and the fifth one belongs to the farmer. 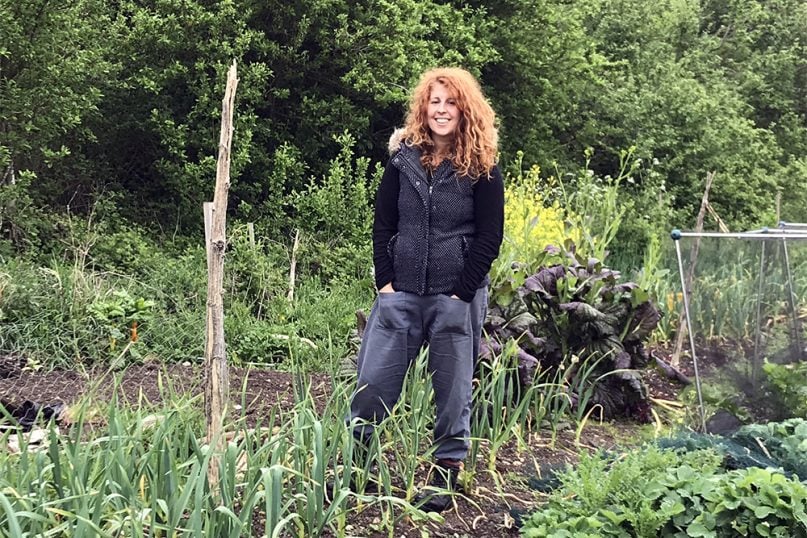 Talia Chain at Sadeh, the farm she founded, in Kent, Britain. RNS photo by Catherine Pepinster

“At first it can be hard to follow the law because the fruit looks so good but it is wise because the fruit drops and composts the land, and the birds and worms, vital to the earth’s cycle, eat them too. Also, the fruit tastes better after a few years,” said Chain.

“But spiritually it is also important because it is a reminder that the land is not ours, although we benefit from it.”

Other Jewish laws decree that a farm’s entire land should be left fallow every seven years and be rested. At Sadeh this won’t be entirely followed, but some beds will be left fallow to improve the soil. 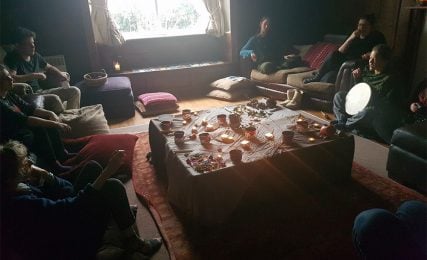 A group meets at the Skeet Hill House, which is also home to Sadeh farm, near London. Courtesy photo

Chain and her staff of three, often aided by volunteers, not only work on the farm but provide accommodation and meals for Jewish groups who come for courses, retreats and environmental education. It is, she said, one of the only Jewish places in Britain where both Reform and Orthodox groups visit.

The farm’s fruit and vegetables are served at Skeet Hill House as well, and some is donated to local food charities. Chain has plans for chickens for eggs and goats for milking. But as a “passionate vegan,” she draws the line at rearing animals for meat.

“Kosher or not kosher, I personally don’t think it’s acceptable to kill animals for food,” she said.

She urges fellow Jews to consider options other than traditional foods such as lamb for Passover. “We can be imaginative, eat things like stuffed peppers.”

British Jews could use a haven like Sadeh, away from not only the normal stresses of life, but also from the growing anti-Semitism in Britain. Anti-Semitic incidents have reached a record high in the U.K., with last year showing a 16% increase over 2017. The Community Security Trust, which monitors anti-Semitism and provides security to the Jewish community, said that there were 1,652 incidents in 2018. These included verbal abuse as well as desecration of property such as graves. 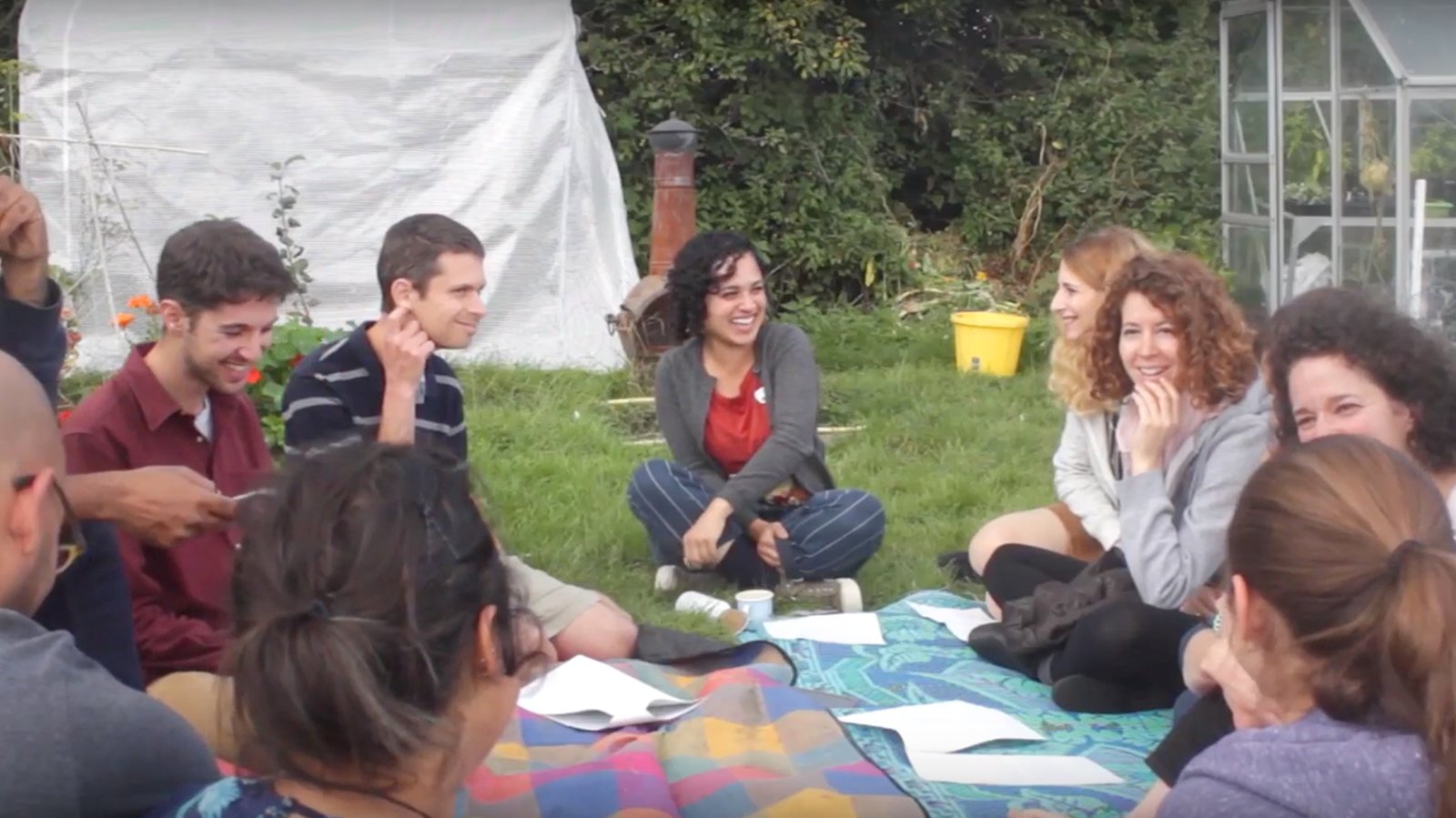 A group meets at the Sadeh farm near London. Courtesy photo

Said Chain: “People are feeling more scared than I can remember. The Holocaust was only two generations ago and people are very nervous.

“My particular concern is that as we suffer more climate change and there could be food shortages, that is when people turn against others. We could then see another rise in anti-Semitism.”