NAIROBI, Kenya (RNS) — As disputes over homosexuality continue to stir within the worldwide Anglican Communion, conservative African bishops say they will boycott a decennial gathering of top clerics next summer unless what the Africans consider godly order is restored.

After delaying the Lambeth Conference, normally held once a decade, for two years, Archbishop of Canterbury Justin Welby, the global leader of Anglicanism, has invited all active bishops and their spouses to the United Kingdom in July and August of 2020 — except the spouses of bishops who are in same-sex unions.

But the African bishops object to the invitation of bishops in the communion who are in same-sex unions. Those bishops’ presence, the Africans say, constitutes an endorsement of homosexuality, which they reject as contrary to the Scriptures. 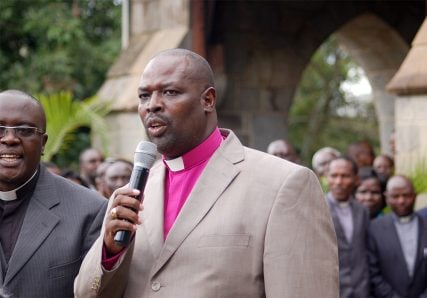 “I will not be at the Lambeth Conference for those reasons. Others are also boycotting,” Archbishop Jackson Ole Sapit of Kenya told Religion News Service in an interview. “God’s plan of marriage is between a man and woman for procreation. Homosexuality is a sin before God.”

Sources said representatives from Nigeria and Uganda, two provinces of the communion with large populations of Anglicans, would also stay home. Both Archbishop Nicholas Okoh of Nigeria and Archbishop Stanley Ntagali of Uganda strongly oppose homosexuality as un-Christian.

Nigeria has the highest number of Anglicans within the communion. Uganda is third after U.K., with Sudan and Kenya following.

Slated for summer of 2018, the Lambeth Conference was delayed for the first time in its 150-year history when Welby said in 2014 he intended to visit every province before calling the conference, in hopes that all active bishops would attend.

His failure to avoid a boycott by the African provinces widens the split within the communion, which has struggled to stay together despite doctrinal differences over the ordination of gays and blessing of same-sex unions. 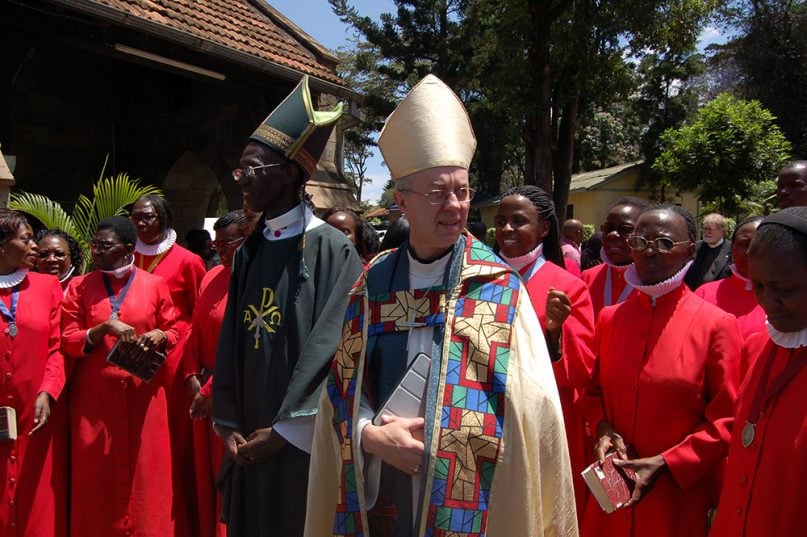 The Rt. Rev. Mary Glasspool, a bishop in the Episcopal church’s Diocese of New York, is married to Becki Sander. On June 22, the Rev. Thomas Brown is due to be consecrated to lead the Diocese of Maine. He is married to Rev. Thomas Mousin. In Canada, suffragan Bishop Kevin Robertson of Toronto married Mohan Sharma in December 2018.

All three have planned to attend, though the bishops of the New York Diocese wrote an open letter to Welby in February objecting to his policy excluding same-sex spouses.

Shortly afterward, Okoh, Nigeria’s primate, or senior bishop, wrote, “With great sadness, we therefore have to conclude that the Lambeth Conference of 2020 will be an obstacle to the gospel.” 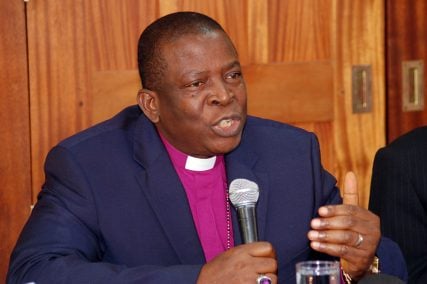 Archbishop Nicholas Okoh, the primate of the Anglican Church of Nigeria. RNS photo by Fredrick Nzwili

Okoh is a member of the Global Anglican Future Conference (GAFCON), a network of roughly a dozen conservative bishops — some of them not recognized by the worldwide communion — formed at the time of the last Lambeth Conference, in 2008, to protest the inclusion of two gay bishops from the U.S. and Canada.

On May 6, GAFCON’s Primates Council, meeting in Australia, issued a statement saying GAFCON’s delegates in an earlier meeting in Jerusalem had urged the bishops to shun Lambeth 2020 if godly order was not restored in the communion. They said Welby had not responded or acted on their concerns.

“The incoherence further tears the fabric of the Anglican Communion and undermines the foundation of reconciliation,” said the statement.

GAFCON has planned its own conference in the Rwandan capital, Kigali, to allow those who will not be attending the Anglican Communion gathering in the U.K. to fellowship together.