LOS ANGELES (RNS) — After years of advocating by community and faith organizations, the city of Los Angeles is officially requiring an oil and gas company to close and clean up a neighborhood drill site.

“It’s one of the closest sites to residential homes within the whole city,” said Niki Wong, director of policy and organizing at Redeemer Community Partnership, a local faith group. “You can literally place one hand on a bedroom window and another hand on the drill site wall.”

The site on Jefferson Boulevard, near the University of Southern California, is 130 feet from a church and 730 feet from an elementary school, according to Stand-L.A., a local environmental coalition that includes faith-based groups.

The decision to clean up the site came after Redeemer Community Partnership learned in August that Sentinel Peak Resources, according to the Los Angeles Times, planned to shut down the facility.

Owners told the city they were preparing the site for another use “yet to be determined.” That left organizers feeling uneasy about the future.

The nonprofit began working to make sure the closure and cleanup are done in a timely manner and that the site isn’t left as an “orphan well,” abandoned by the company.

“They’re very toxic, industrial sites. They operate in a way that requires a lot of chemicals,” Wong said. “There have been so many people that have gotten sick.” 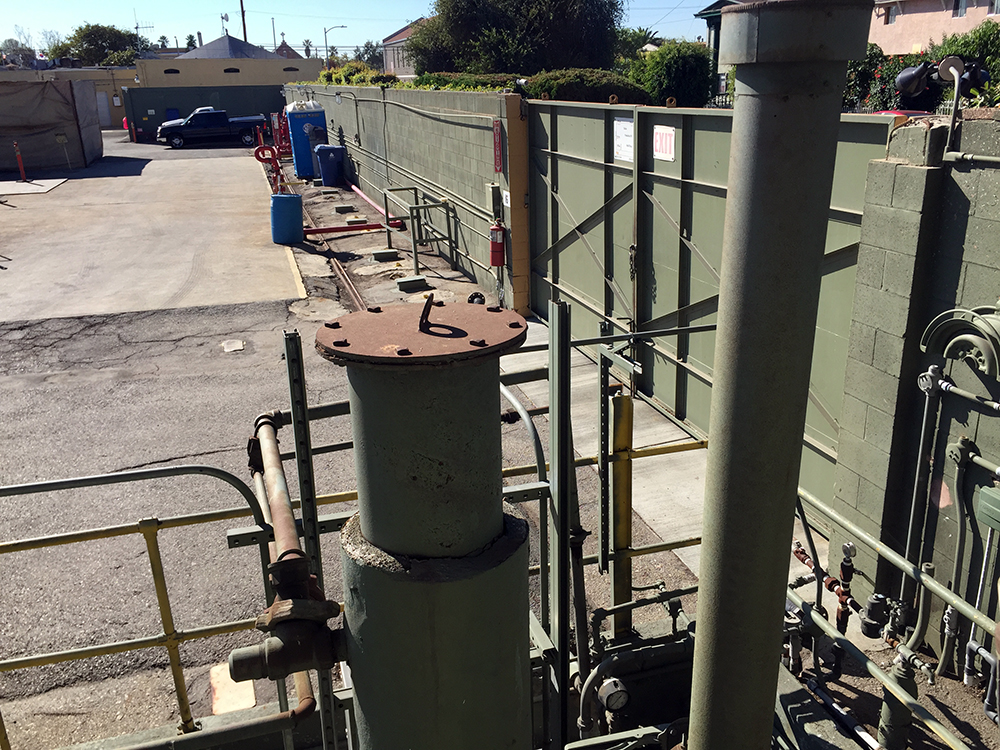 The Jefferson Street oil drill site in Los Angeles will be closed and cleaned up after years of social pressure. RNS photo by Bob Smietana

City officials found “there was sufficient evidence that the operator intends to abandon the oil drilling facility.”

“Also, it was discovered that there remain ongoing nuisances from the oil drilling operation,” the city said in its ruling.

With the May 15 ruling and the passing of the appeal date on May 30, the company will have 36 months to close and clean up the land properly.

But it’s not the only drilling site Redeemer Community Partnership and Stand-L.A. are fighting.

A rally in September focused on the AllenCo drilling site and promoted legislation for a 2,500-foot buffer between extraction sites and homes.

All members of Redeemer Community Partnership live in these neighborhoods they’re fighting for, Wong said.

“Jesus commands us to love our neighbor,” she said. “We really see it as our mission to bring the kingdom of God to this little space in South LA as best we can.”

In three years, Wong said, members of the community are hoping the old Jefferson Boulevard facility will be transformed into affordable housing, a library or a park.

“People just want it to become something that will benefit the community,” she said.

Christine Halley, director of environmental health and safety for Sentinel Peak Resources LLC, told RNS that the company “took ownership of the Jefferson site in January 2017.”

Following much consideration and analysis, in August 2018 the company brought a proposal to the city that would allow for the plugging and abandonment of the remaining wells on the site so that it might be remediated for another use,” Halley said in a statement.  “This proposal was then approved by the City’s planning commissioner. There was public comment provided by Redeemer Church, but they in no way forced the site’s closure nor is the City of Los Angeles requiring it.”

This story was updated with a comment from Peak Sentinel.