(RNS) — Shavuot, the Jewish holiday that celebrates God giving the law to Moses, is a time to begin again, to learn new things. After all, the giving of the Torah meant absorbing 613 new commandments — OK, some were given earlier but let’s quibble later; shouldn’t we try to learn something we did not know before in honor of the holiday?

I am proud that my congregants at New Light Synagogue in Pittsburgh, the scene of the most lethal act of anti-Semitism in American history — have been doing that.

After the shooting at the synagogue last October 27, many of us stepped up our levels of commitment and devotion. In a small synagogue, we have four new students learning Haftarah, the special chant for the prophetic selection of the Bible read on the Sabbath and holidays. We have 11 students in a beginner’s Hebrew class learning the language for the first time. My daughter, who had always said no when asked to lead Shaharit, the morning prayer, after her bat mitzvah, now always says yes.

Some of us are doing it in honor and memory of those killed. Others are simply following their example. The first Friday night after the shooting, my husband, Rabbi Jonathan Perlman, asked those assembled to share their memories of our friends and congregants who were no longer with us. “I have been talking all week,” he said, “I am tired of talking, now it is your turn.”

When people spoke of victims Rich Gottfried, Dan Stein and Mel Wax, one theme emerged consistently: They all excelled at enabling others to find their Jewish voices. A woman places a stone on a memorial outside the Tree of Life Synagogue to one of the 11 people killed when a gunman opened fire during worship at the synagogue in Pittsburgh, on Oct. 29, 2018. (AP Photo/Gene J. Puskar)

One man spoke of how Mel would patiently help him put on his tefillin, ritual phylacteries, when he came to minyan, making sure they were positioned properly. Dan would ask people to take aliyot to the Torah, saying a blessing in Hebrew before the portion of the five Books of Moses are read. If they felt unsure, he would encourage them with a smile and his trademark fist bump and help them go over the Hebrew.

Rich led much of the High Holiday services and blew shofar and at each service rolled the Torah to the proper place for the next week. He was always eager to contribute his opinion in discussions when my husband led a teaching session instead of giving a formal sermon. Rich’s willingness to participate always helped open the floor so that others would as well.

All of the things these three men killed did helped others to find their own Jewish voices and ways to participate and contribute to the synagogue service as each of them did so devotedly. And that, in some ways, is what Shavuot is about.

Consider the two figures most associated with the holiday, King David and Rabbi Akiva ben Yosef.

Tradition tells us King David’s death came on Shavuot, and the book of Ruth, which we read on Shavuot, concludes with his genealogy, foreshadowing his future reign. And no voice in Judaism is stronger than David’s. He was the singer and composer of many of the songs compiled in the book of Psalms, according to tradition.

The Psalms are still used throughout our liturgy to enable us to voice things we might otherwise not have words for. They are one of the premier vehicles of the Jewish voice, over thousands of years. His voice was so important that according to the traditional interpretation of the Book of Ruth, Ruth Rabbah, God refused to make the day of David’s death earlier because God valued his prayer so highly. 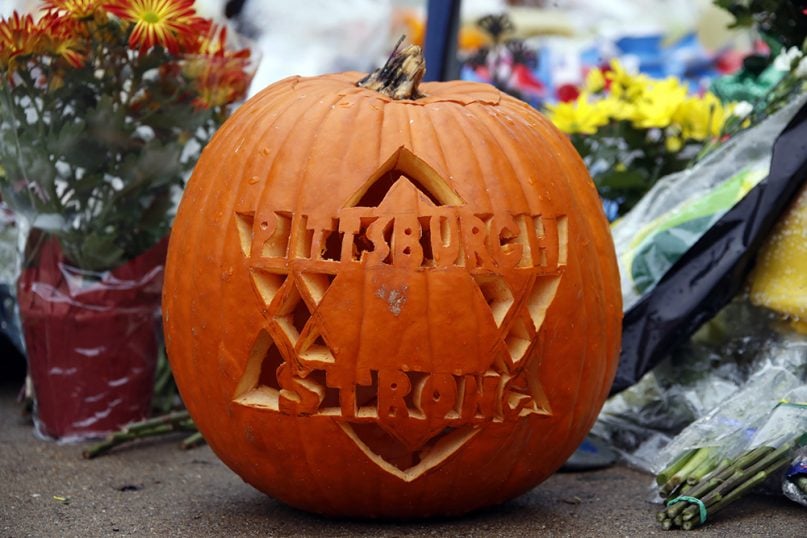 A pumpkin carved with the message ‘Pittsburgh Strong’ sits among flowers outside the Tree of Life Synagogue on Nov. 1, 2018, as part of a makeshift memorial dedicated to those killed while worshipping at the synagogue on Oct. 27, 2018 in the Squirrel Hill neighborhood of Pittsburgh. (AP Photo/Gene J. Puskar)

Rabbi Akiva, the beloved first- and second-century sage, is connected with Shavuot because of the legend that 24,000 of his students died calamitously in one year, in the 50 days between Passover and Shavuot, silencing a whole generation of learned rabbis. Rabbi Akiva’s response to the loss was to begin again with five students and to rebuild the link of oral tradition.

Rabbi Akiva was a man without prestigious lineage, a descendant of converts who had not yet begun to study Torah when he turned 40. The story goes that he accompanied his young son to school and began his learning at that most basic level. Yet he became one of the greatest sages.

As such, he represents the democratization of Torah study, showing that it is open to all Jews despite their origins or social class.

Our congregation is older, but we all believe it is never too late. People are learning a new language, a new alphabet, even at ages when learning is slower than it is when young. The mortality that came all too soon to our friends and fellow congregants reminds us that we need to live as we think we should now and not in the future, not save the chance to learn Hebrew or Haftarah or Torah trope for “one day,” but to do it now.

Mortality reminds us of this necessity to live as we wish to now, not to wait for a future time when all will be ideal.

Melissa Glaser, in the book “Healing a Community,” explains the meaning of post-traumatic growth as “the belief that you can also achieve personal growth, encounter new opportunities, develop closer relationships, gain a stronger appreciation for life, and deepen your spiritual core in the wake of tragedy.”

After the years of slavery in Egypt, narrow escape from the Egyptians and harrowing attempts to survive in the wilderness, the Israelites receive the Torah. The experiences they had been through were bitter and difficult ones and yet they were able to find ways to sustain themselves and to reach the Promised Land, many years later.

Similarly, we celebrate Shavuot by receiving the Torah as a vehicle for growth, a blueprint for it, a way to find our Jewish voices and our way in the world.