(RNS) — Theologian and Christian apologist Norman Geisler, the author of dozens of books and the co-founder of two seminaries, has died. He was 86.

His family announced his death on Monday (July 1) on his website.

“It is with great sadness that we share this news that Norm Geisler passed away peacefully this morning,” reads the brief statement. “He has left behind an amazing legacy that will continue to have a ripple effect for many years to come.”

In April, Southern Evangelical Seminary near Charlotte, North Carolina, announced Geisler was retiring from his teaching duties “due to health reasons.” Geisler co-founded that seminary in 1992.

SES President Richard Land said Geisler influenced him as a seminary student in the early 1970s.

“Dr. Geisler has been the ‘go to’ authority for more than two generations of evangelical seminary students who were looking for a bold, erudite, and uncompromisingly faithful defense of the inerrant, infallible Word of God and the historical doctrines of the Christian faith,” Land wrote in a tribute at The Christian Post. “His ministry was invaluable, and his influence incalculable.” 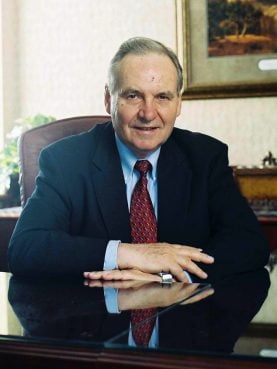 A philosopher and longtime defender of conservative Christian beliefs, Geisler founded the International Society of Christian Apologetics in 2006. Two years later, he co-founded Veritas Evangelical Seminary, a school in Santa Ana, California, now known as Veritas International University, according to the school’s history.

The author of a four-volume set of books on systematic theology, Geisler spoke regularly at SES’ National Conference on Christian Apologetics. In the 1970s and 1980s, he was a prominent nationwide debater on topics ranging from abortion to creationism to the existence of God.

In 1984, he appeared in a debate with Rabbi Harold Kushner over the question in the title of Kushner’s book, “Why Do Bad Things Happen to Good People?”

William C. Roach, president of the International Society of Christian Apologetics, recalled Geisler’s contributions to Christian theology in a blog post on Monday.

“In an era of church history when theology is in chaos, and the church is being shaken at its very core, and reality seems to be tossed to-and-fro with every wave of the sea,” Roach wrote, “we are grateful for the example of Dr. Geisler who stood as a beacon of truth shining forth in the midst of a dark world.”

Roach added that Geisler was “much more than a scholar”; he was also a man who practiced what he preached. Roach, an adjunct professor at several institutions, including Southeastern Baptist Theological Seminary, recalled that the theologian would lend his car and a room of his home to people in need and “sing goofy Johnny Cash songs with his grandchildren.”

A tweet from Defending Inerrancy, an initiative of scholars who believe the Bible is without error, described Geisler as the “greatest champion of full biblical inerrancy” in the last quarter of the 20th century and the first quarter of the 21st.

Fellow Christian apologist Ravi Zacharias mourned the death of Geisler. Zacharias said that Geisler had been his professor in the 1970s and remained a mentor in the following years.

“I owe more to him than anyone else for teaching me how to do apologetics for the Christian worldview,” Zacharias said in a tweet. “His death is a loss beyond words.”

Religion Hub
Christians hold many views on Jesus’ resurrection – a theologian explains the differing views among Baptists
Follow us on Facebook!
Submit your photos to RNS