(RNS) — Paul’s letter to the Romans is the pinnacle of the apostle’s theology — a dense, rich text that biblical studies experts have been poring over for centuries.

But I’m willing to bet that few of those scholars tried reading Romans from the end to the beginning, which is what evangelical scholar and popular author Scot McKnight does in his new book, “Reading Romans Backwards: A Gospel of Peace in the Midst of Empire.”

“Backmasking” Romans (the term refers to recording backward for effect, as the Beatles did on their song “I’m Only Sleeping”) gives us a totally different perspective, McKnight says. The historical context that’s at the end of the letter — information about the house churches in Rome, names of the women and men who were in charge and hints about the deep divisions between Jews and Gentiles — is crucial for understanding the meaty theology in the first half.

What’s more, it’s crucial for understanding the divisions we’re experiencing right now. There may never have been a more important time for American Christians to study Romans than during the age of Donald Trump. 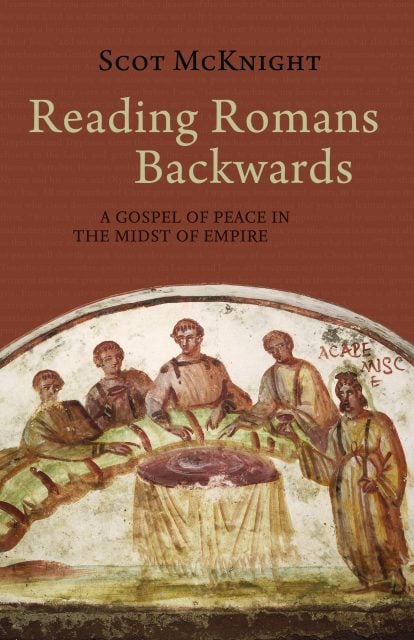 Why should we read Romans backward?

Romans is the most significant theological text in the New Testament for the development of Christian theology, and yet today it’s a network of arguments and problems. In reading Romans over the years, I became convinced that the book became abstract theology, if not systematic theology, and it totally lost connection with its historical context.

And here’s why: It’s a lot of work to read Romans 1 through 8. When you add Romans 9 to 11, it’s even more work. By the time people get to Romans 12, they’re exhausted, and they skim over it. They make a pledge that next time, they will just use Galatians! It’s the Reader’s Digest version of Romans.

So what is the most important social and church context for understanding Romans — namely chapters 12 through 16 — is often ignored when people only read Romans 1 through 11. And yet this letter, like all of Paul’s letters, is addressed to a specific context and a particular set of people. So ignoring 12-16 flattens the reading of the book and misses the historical context.

Tell us about that historical context. What do we know about the churches Paul was writing to in Rome?

I think there are four major aspects to the context.

The first is that there are probably five house churches in Rome, evidently comprised of mostly slaves with a clear presence of female leaders. So we know the social context. The churches were made up of perhaps 100 mostly poor people.

Second, Phoebe is the letter courier. It is unlikely that Paul hired a professional reader from Rome to read to a group of poor Christians in Rome, so it is highly likely that Phoebe read the letter aloud at least five times, once for each house church. Furthermore, a letter-reader’s responsibility was not just to read, but to perform, to ad-lib and to answer questions.

Third, in the Book of Romans we see the most emphasis on the church’s division of any letter Paul wrote. There’s a chapter and a half of discussion and exhortation to the strong and the weak. “Strong” does not mean theologically brilliant; it means having high social status. And “Weak” does not mean being theologically unengaged, but socially having a low status.

So Paul spends a lot of time talking about the tension between the high- and low-status believers in Rome, who are almost certainly divided between gentile believers (the Strong) and Jewish believers (the Weak). The Strong thought Torah observance was passé, while the Weak thought the Strong’s disregard for the Bible’s teaching was disobedience.

Fourth, there’s an emphasis on Christian living in Romans 12-16, which can be summarized in the idea of learning to live in the way of Christ, which I call Christoformity.

Paul did not write this letter to get Romans saved. It is not an evangelistic letter. He wrote this letter to saved Christians to get them to eat together in peace, to live as siblings as Christ, not as enemies with one another.

That’s an interesting point, because so often in modern interpretation Romans is seen as a part of the Bible that’s all about individual salvation.

Paul’s mission was not to get gentiles saved, but to get saved gentiles to live in peace with saved Jews. And I don’t think that’s our emphasis today. It’s not on the church, but on personal redemption. Some would root that in Augustine’s “Confessions,” and others would see it as arising from the Enlightenment and its focus on the individual. That may be where we get our radical emphasis on individualism. Darrin McMahon’s research shows that it’s in the 17th century that personal happiness becomes a dominant idea. So something happened in modernity that turned the volume up several notches toward individualism.

So what changes about the first part of Romans when we read the book backward? How does knowing the social context change our understanding of the theology?

Let’s start with what is to me a very critical verse that is largely ignored: In 11:13 Paul says, “Now I speak to you Gentiles.” From that point on, through the rest of 11, Paul is exhorting the gentile believers not to get too cocky about their redemption.

That made me look back at Romans 9:1-11:10 and see that it is written to Jewish believers, to the “Weak.” It’s loaded with Scriptures, and keeps pounding away rhetorically with one question after another. When I noticed the abundance of the Old Testament and the interrogative form of those two chapters, and the absence of Old Testament Scripture and interrogative questions later, it made me realize that Paul talks to his fellow Jewish believers in a different way than he does to gentile believers. And that Paul talks to his audience in Romans 1 through 4 the same way he talks in 9:1 through 11:10, so that is for the Jewish believers.

In other words, Romans 1-4 is not a sustained argument that is trying to prove to people that they’re sinners and need to accept justification by faith. It’s that Paul wants to show to the Weak believers in Rome that they’re not saved by the law — that redemption and transformation come by way of the “line of Christ,” which is God’s grace, death to sin, life in Christ and the Spirit.

Chapters 5-8 are the core of Romans, and are addressed to everybody; it’s his solutions to the problem of tension in Rome. That tension is only resolved when they live in the Spirit and not in the flesh.

What in Chapters 5-8 points the way?

Paul doesn’t say “This is for the Weak” and “This is for the Strong.” The Weak and the Strong are sitting in the audience and hearing this, with solutions that half of the audience probably doesn’t like. Paul thinks in binary opposites: You either live in the flesh or you live in the Spirit. You either follow the law or you don’t. You either have been baptized and are alive in Christ and dead to sin, or you are unbaptized and alive to sin but dead in Christ.

That is the mutual either-or that Paul wants to press upon both the Strong and the Weak. He says, “I’ll tell you later that you have to give yourself daily as a sacrifice, but for now I’ll just tell you that you’ve died. You’re no longer alive to the status and the praises and honors that you had in the Roman Empire.”

At the very end of the book, you say that in our current situation, Romans is more relevant to the American church than any other book of the Bible. Why is this needed right now?

Let’s start with politics. We are in a situation right now where progressives look at conservatives as deplorables, as hillbillies, as white trash. On the opposite side, conservatives see progressives as breaking down the tradition of America. They see them as abandoning the ways that made us who we are.

The church has foolishly chosen to play the same game that the culture is playing right now, making the church indistinguishable from society — whether you want to talk about progressives or conservatives. That is not unlike the Weak and Strong problem that Paul talks about. Paul says in Romans 14:1 that we’re to welcome each other, and not for the purpose of quarreling over opinions. The same-sex debate is a symptom of this: a politicized theological debate where people cannot talk to one another. It’s a zero-sum game.

So we live in a world where it’s very like the world of the Christians in Rome in the first century. What Paul says can help us today: Treat one another as siblings, realize that we have differences, and our responsibility is to tolerate one another in our differences. But instead, these debates are dividing the church just like they’re dividing society, and the church should be a peacemaking people.