(RNS) — As the nation reacts to the weekend’s mass shootings and President Trump decries hatred that “devours the soul,” religious leaders called for action from his administration and Congress.

In his remarks from the White House on Monday (Aug. 5), Trump said he joined in the grief and outrage over the “two evil attacks” in El Paso, Texas, and Dayton, Ohio, in which more than 80 people were killed or wounded. At least 22 people had reportedly died as a result of the El Paso shootings and nine in the Dayton violence.

The president also made a religious appeal in his speech. “We ask God in heaven to ease the anguish of those who suffer and we vow to act with urgent resolve,” he said in a 10-minute address, with Vice President Mike Pence standing nearby.

“In one voice our nation must condemn racism bigotry and white supremacy,” Trump said. “These sinister ideologies must be defeated. Hate has no place in America. Hatred warps the mind, ravages the heart and devours the soul.”

RELATED: Gilroy, El Paso, Dayton, and the normalization of violence

The president suggested several possible courses for bipartisan action, saying he would direct the Department of Justice to partner with other agencies and social media companies to better “detect mass shooters before they strike” and to propose legislation so those who commit mass murders or hate crimes will face a death penalty that is “delivered quickly, precisely and without years of needless delay.” 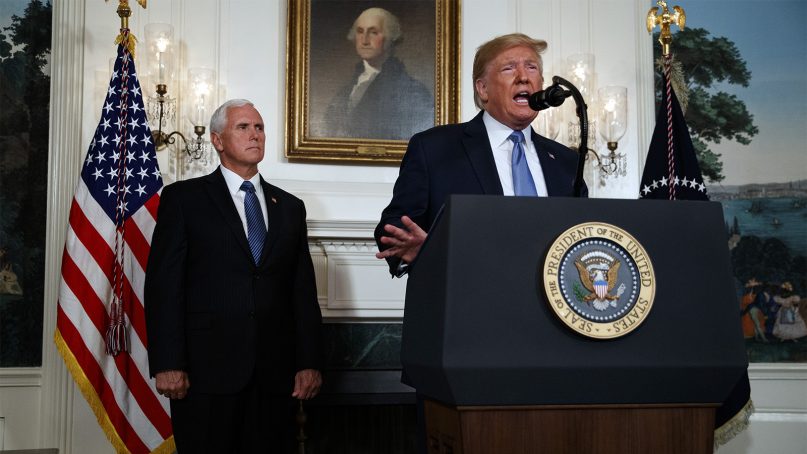 Trump also called for reducing “glorification of violence in our society,” including through video games, and legal reforms to better identify mentally disturbed people and to reduce access to firearms by people considered a risk to public safety.

Spiritual organizations and faith leaders were also focused on solutions to the wave of shootings. In a sampling of religious reaction to the tragedies, several urged politicians and governmental bodies to take steps:

“The combination of readily available weapons of mass destruction and a toxic white racist nationalist ideology is a recipe for disaster. If we cannot confront these two evils, far greater violence and social disruption awaits our nation.

“We beseech elected officials to renew the lapsed ban on assault weapons and to require licensing and background checks for gun ownership. We also demand that legislation which has recently passed the House, including HR8, be brought to a vote in the Senate and passed. Senate Majority Leader Mitch McConnell must be held to account for blocking legislation that would have introduced common-sense measures years ago.”

“We encourage Catholics to pray and raise their voices for needed changes to our national policy and national culture as well. We call on all relevant committees of the United States Conference of Catholic Bishops to outline a reinvigorated policy agenda and pastoral campaign to address ways we can help fight this social disease that has infected our nation. The Conference has long advocated for responsible gun laws and increased resources for addressing the root causes of violence. We also call upon the President and Congress to set aside political interests and find ways to better protect innocent life.”

“The NHCLC’s community of thousands upon thousands of churches is profoundly grieving at the terror unleashed in El Paso today, terror targeting our nation’s beloved Hispanic community. We urge our political leaders, Democrat and Republican, to once-and-for-all depoliticize immigration in this country and instead embrace a fact-based approach to this and to all political questions that divide us. Even more importantly, we call upon people of sincere faith in every corner of our country to recommit themselves to loving the ‘other’ and to begin to pray with all their might that God would heal our broken land.” Shoes are piled outside the scene of a mass shooting in Dayton, Ohio, on Aug. 4, 2019. (AP Photo/John Minchillo)

“The Sikh American community is deeply saddened by the shooting in El Paso, Texas. As Sikhs our central belief in our faith is that in the eyes of God all people, regardless of their race or gender, are equal and as Americans our founders declared in our founding documents that ‘all men are created equal.’ We are disturbed by the rise in ideologies in our country that are fundamentally contrary to the core values of our nation and our faith. We pray for the victims and their families in El Paso and also in Dayton, Ohio.”

“We have documented a rise in extremist activity, both online and in our communities. As with too many of these incidents, our experts have again been reviewing the apparent manifesto of an alleged shooter, as well as other elements of his online footprint, to evaluate potential extremist ties, and we have also reached out to law enforcement to provide expert analysis and support.”

The Rev. Alvin Herring, executive director of Faith in Action

“We are seeing a pattern of an especially dangerous form of domestic terrorism that has people of color, immigrants, Muslims, members of the LGBTQ community and others in its crosshairs. It is beyond time for this Congress to act to rein in the proliferation of guns, especially those created for the sole purpose of indiscriminate killing. We each have a moral obligation to pressure this administration and this Congress to act. But beyond that, we must not let the forces of evil divide us and frighten us into silence.”

“The American Family Association condemns white supremacy, all manner of racial animus and hatred of any kind that may have been the impetus for the attacks in El Paso, Texas, and Dayton, Ohio. We also recognize the deep and vast spiritual needs of our country. Our nation needs God desperately, which is more evident every day. The more our nation turns away from God as He has revealed Himself in the Bible, the more it seems we reject the reality that innocent human life is sacred. We call on AFA friends and supporters around the nation to join us in praying for the devastated families and communities affected in El Paso and Dayton.”

“It is absurd to suggest that eliminating military style assault rifles and extra capacity ammunition clips or requiring universal background checks will lead to the government taking away all our guns. These are fears stoked by a gun lobby that values the desire to own such weapons over the well-being of the community.

“We must also address a culture where hate is all too present in our national dialogue. The specific motives of this week’s shootings are still under investigation. However, seeing deeply troubled individuals driven by anti-immigrant and white supremacist sentiments seeking to make their point with deadly force is not a consequence we should tolerate.”

Zarina Baber, chair of the Muslim Caucus of America

“The Muslim Caucus of America stands in solidarity, support, and remembrance of the victims and communities affected by the senseless domestic terrorist attacks that took place within 24 hours of each other in El Paso, Texas, and Dayton, Ohio.

“As additional details continue to be reported and revealed on these mass murders, the Muslim Caucus of America also stands with those law-makers of conscience to condemn these attacks. We also demand all elected officials to take action for common-sense gun reform and the designation of white nationalist terror as domestic terrorism, similar to Canada, who added white supremacists and neo-Nazi groups to its list of terrorist organizations.”

The Rev. Jennifer Butler, CEO of Faith in Public Life

“On the seventh anniversary of the attack on the Sikh temple at Oak Creek, which killed six people, we mourn continued mass murder in El Paso and Dayton. People are being murdered by weapons of war because of their race, their religion or simply being in the wrong place. President Trump must stop his rhetoric, which incites violence, and prioritize investigating white supremacist terrorism. The Senate must pass HR 8, which would amend federal gun laws to require background checks for all gun sales. Only these concrete steps toward repentance will start to heal our nation.” Opinion
Overturn Dylann Roof’s death sentence — for me, not for him
Follow us on Facebook!
Submit your photos to RNS