(RNS) — Until the deadly shootings over the weekend, national headlines had been dominated by attacks denigrating the vibrant and diverse city of Baltimore. The two stories have more in common than you might think.

The depiction of Baltimore as a “rat and rodent-infested mess” is a form of hate speech. In his tweets about Baltimore, as in so many of his pronouncements, our president seems to have forgotten the inexorable link between verbal and physical violence. It starts with dehumanizing the “other” with words: rapist, swine; towel head; vermin, filth; ape; parasite; fag.  Words such as these empty others of their humanity and reduce them to caricatures that evoke contempt.

It then becomes a small thing to move from these caricatures of contempt to walking into a Walmart with a rifle to shoot at them, or seeing them swing from a lynching tree or to shove them into the fires of a Nazi oven.

For me there is another more personal connection between combating hate speech and the city of Baltimore: I am the widow of the “human rights rabbi” Marc Tanenbaum, one of Baltimore’s proudest sons and the subject of a recently published biography, “Confronting Hate: The Untold Story of the Rabbi Who Stood Up for Human Rights, Racial Justice and Religious Reconciliation.”

Before his death in 1992, Marc’s unique take on Judaism compelled him to be a universalist, not a particularist; outward-facing, not insular.

Indeed, the rabbinic techniques he honed last century are completely relevant for the toxic environment in which we live today. He formed multi-faith coalitions. He called out the politics of purity. He debunked myths. He mobilized the moral authority of clergy. He challenged politicians’ claims of piety. He listened deeply to the fear that underlies hate. 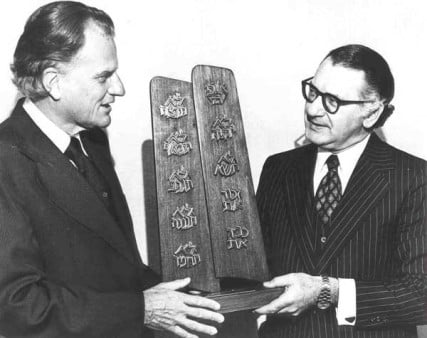 The lessons of Marc’s legacy apply equally to defending individuals or an entire American city: It is important to deflect and debunk hate speech as it happens. That means counter-messaging with the same sophisticated tools employed by those who foment hate and violence.

Marc preached — loudly and often — that these very tools need to be hijacked by those who wish to replace hate with deep listening and mutual respect.

Marc’s quest for social, religious and racial justice was inborn. Mine was the result of personal experience as a child of Holocaust survivors and as a refugee. Sadly, the link between moral fervor and physical violence that caused that tragedy has a long history in America, from pious Puritans who burnt witches to the Ku Klux Klan who burnt their crosses to neo-Nazis who march in Charlottesville proclaiming “Jews will not replace us.”

The parallel between the rise of Nazism and that of the alt right, in short, is hate speech, which has escalated with frightening frequency into violence against Muslims, Jews, people of color and other minorities.

Ironically, one often finds the roots of hate speech in religion, despite the fact that the core precepts of each of the great religions are rooted in love, peace and respect. Marc explained this phenomenon with the concept of “group narcissism” — the idea that one’s own group holds a monopoly on truth.

Group narcissism is grounded in apocalyptic thinking that divides the world into two groups: children of light and the children of darkness. By virtue of being black, foreign, Jewish, Catholic, Muslim, liberal, or gay, a person can be branded as “impure” and, therefore, fair game for bigoted scourges.

The criminal justice system can only deal with the consequences of hate speech and react after it turns into a hate crime. This means that religious — and political — leaders have a special responsibility to call out hate speech when it occurs and cut it off at the source.

Fortunately, there are core religious values that give us the tools to do just that.

One of the central precepts of Judaism is the notion that every human being is made in the sacred image of God and, therefore, worthy of dignity and respect. The root of this idea is found in Leviticus 19:16: “Thou shalt not stand by idly while the blood of your brother cries out from the earth.” This verse gives rise to the concept of tikkun olam — the obligation to repair the world. A companion value is the understanding that besmirching a person’s reputation is akin to murder.

Marc’s teaching applies this cosmic notion to mundane chat forums such as Twitter, to begin to repair our broken nation. We need to begin to take back Twitter, appropriating it for tikkun olam.

(Georgette Bennett is a sociologist who has been involved in interreligious relations internationally for the past 27 years.)