The presidential forum, which will include moderated one-on-one sessions with the candidates, will take place Aug. 31 at the Islamic Society of North America’s annual convention in Houston. Known as ISNACON, the gathering is expected to draw about 30,000 attendees from around the country.

“Our community is paying attention to how politicians engage with us, and is differentiating between those who say that they stand for religious freedom, and those who back it up with actions,” said Wa’el Alzayat, head of the Muslim voter advocacy organization Emgage, which organized the forum with ISNA and the Muslim Public Affairs Council. “Attending this event and speaking directly to our community in these critical times is a perfect example of the latter.”

Sen. Sanders, I-Vt., who earlier this year hired what is likely America’s first-ever Muslim presidential campaign manager, was the first candidate to confirm his attendance for the event. Sanders has previously participated in an interfaith event at Washington, D.C.’s Masjid Muhammad and visited a mosque after the New Zealand terrorist attacks. 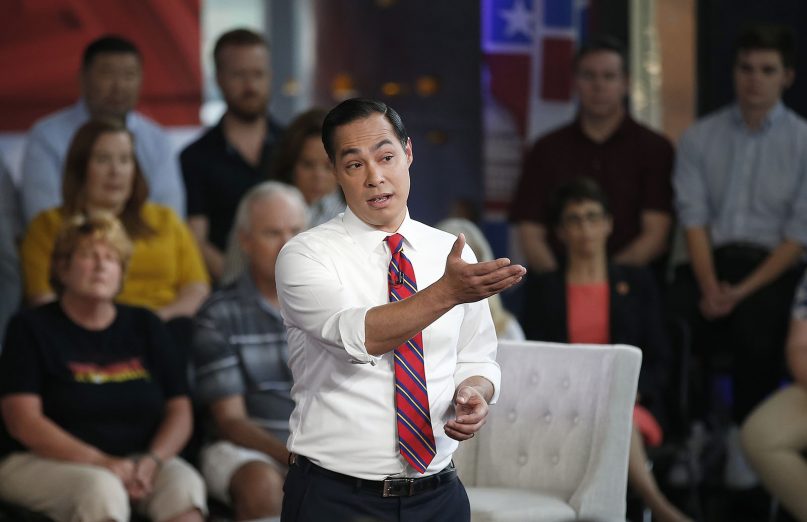 “Our organization is proud of the way American Muslims are contributing in a unique way to the peace and prosperity of our nation and to humanity at large,” Nida Saleem, ISNA’s executive director, said. “We are looking forward to welcome and hear the candidates’ thoughts on how to continue to build this legacy inspired by faith.”

American Muslims are more politically engaged than ever before. During the 2018 midterm elections, nearly 100 American Muslims ran for public office, mostly as Democrats. Emgage’s own research found that during the 2018 midterm elections, Florida, Michigan, Ohio and Virginia saw a total 25% increase in Muslim voter turnout as compared to four years before.

But some Muslim organizers say presidential candidates have been slow to recognize that momentum. Only one candidate attended the Muslim Collective for Equitable Democracy conference late last month in Washington, D.C., organized by the Muslim Caucus and billed as the first national gathering of Muslim Americans in politics.

Most candidates’ dismissal of the event was “extremely disappointing,” Ghazala Salam, the president and founder of the Muslim Caucus, told HuffPost before the conference. “How is democracy as accessible as everybody is telling me it is when we’re not even getting the attention of the presidential candidates?”

The Sanders and Castro campaigns did not respond to requests for comment.