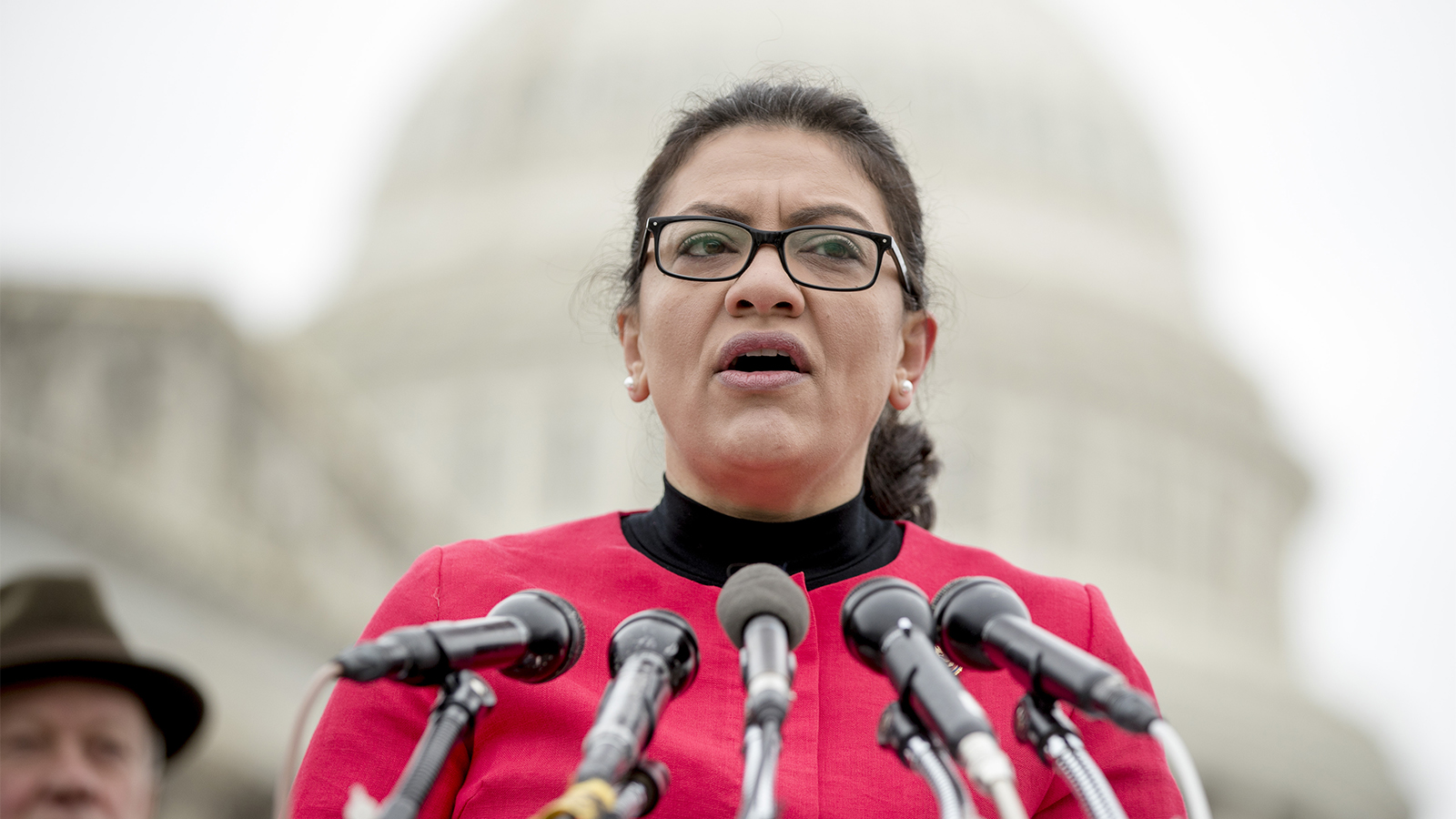 Rep. Rashida Tlaib, D-Mich., speaks at a news conference on Capitol Hill in Washington on Jan. 17, 2019. Tlaib told a Yahoo News podcast that she gets "a calming feeling" when she thinks of how her Palestinian ancestors suffered under the creation of the state of Israel. (AP Photo/Andrew Harnik, File)
August 16, 2019
Isaac Scharf

JERUSALEM (AP) — Israel's interior minister said Friday he has received and granted a request by Democratic Rep. Rashida Tlaib to enter the Israeli-occupied West Bank on humanitarian grounds.
The decision marked the latest sharp reversal over what had been a planned visit by Tlaib and fellow Democrat, Rep. Ilhan Omar, to Jerusalem and the West Bank.

On Thursday, Israel had announced it is barring the two from entry — an unprecedented move targeting members of the U.S. Congress. Israel's decision came after President Donald Trump said in a tweet it would show "weakness" to allow in the two Muslim members of Congress who have been sharply critical of him and of Israel's policies toward the Palestinians.

The decision by Prime Minister Benjamin Netanyahu — and Trump's prior prodding — had sparked widespread criticism, including from Israeli and Jewish organization which said it was an affront to U.S. institutions to bar the entry of members of Congress. Critics also argued that it weakened Israel's traditionally strong ties with the U.S. through heavy-handed partisanship.

On Friday, Israeli Interior Minister Aryeh Deri announced the latest twist — that Tlaib had requested and been granted permission to enter the West Bank to see relatives, including her 90-year-old grandmother.

Deri's office published what it said was Tlaib's written request, on congressional stationary.
In her letter, Tlaib said this would likely be the last chance to see her grandmother and that she would respect any restrictions and "not promote boycotts" during her visit.

Tlaib's office could not immediately be reached for comment.

Deri's office said he "decided to allow her entry to Israel and hopes she will stand by her commitment and that the visit will be for humanitarian needs only."

Tlaib's apparent pledge to conduct the visit in line with restrictions imposed by Israel was bound to anger Palestinians who had hoped the congressional tour, organized by a Palestinian group, would highlight their plight. Israel captured the West Bank, Gaza Strip and east Jerusalem in the 1967 Mideast war. Palestinians hope to establish an independent state on those lands.

Tlaib and Omar are known as supporters of "boycott, divestment and sanctions," or BDS, a Palestinian-led global movement. Israel alleges that BDS targets Israel's very existence, while the movement's supporters say it is intended as leverage to end more than half a century of Israeli military rule over Palestinians.

Israel's decision Thursday had been an extraordinary step bringing the longtime U.S. ally into Trump's domestic fight against political rivals at home.

The U.S. president was essentially relying on Israel to retaliate against Tlaib and Omar. The two are part of the "squad" of liberal newcomers — all women of color — whom Trump has labeled the face of the Democratic Party as he runs for re-election. Trump's actions marked a glaring departure from the tradition of American politicians leaving domestic disputes at the water's edge.

For Israel, the willingness to side so pointedly with Trump marks a deeper foray into America's bitterly polarized politics and risks its relationship with Congress.

Israel announced the ban Thursday after Trump tweeted that "it would show great weakness" if the two were allowed to visit. Asked later if he had spoken to Netanyahu, he said, "I did talk to people over there," but he declined to say to whom.

Omar, who became the first Somali-American elected to Congress, denounced the ban on her and Tlaib's tour as "an affront" and "an insult to democratic values."

In Israel, Netanyahu said Thursday that his country remains "open to critics and criticism," except for those who advocate boycotts against it.