(RNS) — On the 18-year anniversary of the 9/11 terrorist attacks that set off the ongoing global war on terror, a new visual timeline seeks to document the U.S. policies and programs that Muslim and civil rights activists say have resulted in major encroachments on human rights.

“The goal is to really underscore how the war on terror is so rooted in Islamophobia and to really lift up the story of the ways that Muslims have been impacted,” said Maha Hilal, a researcher on the war on terror and co-director of the Justice for Muslims Collective who directed the yearlong effort to produce the timeline.

“We don’t have the resources to create a whole museum, but we hope this visual representation will help people understand the war on terror has almost exclusively targeted Muslims,” Hilal said, noting that the timeline highlights the “underlying Islamophobia” linking nearly two decades of torture, immigration crackdowns, surveillance overreaches and more.

Illustrator Zaynub Siddiqui and graphic designer Maura Dwyer from The Sanctuaries DC, a community space for artists and activists that includes several Muslim members, illustrated and designed the 19 panels that comprise the timeline. 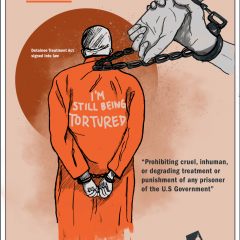 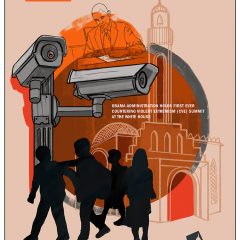 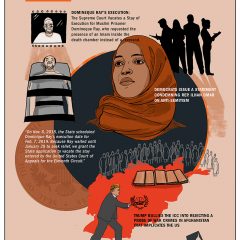 Images courtesy of Justice for Muslims Collective. Editors note: Images not for republication

The resulting exhibition, “Shattering Justice & Re-Making the Muslim Threat: A Visual Timeline,” will open in Washington, D.C., on Wednesday (Sept. 11). Attendees will also hear a talk from Hilal on dismantling “the expanding apparatus of state violence,” a workshop by The Sanctuaries on cultural organizing, as well as parts of speeches by Presidents Donald Trump, Barack Obama and George W. Bush related to the U.S.-led global campaign against terrorism.

“This is not about Trump,” Hilal added. “Trump is just building off the infrastructure that was perpetuated by Obama and pushed through by Bush.”

Events on the timeline include the campaign against Afghanistan and authorization for use of military force in 2001; the establishment of the Department of Homeland Security and the signing of the so-called Torture Memos in 2002; the 2004 release of photographs showing abuse and torture of Abu Ghraib prison inmates; the murder of journalist and Saudi dissident Jamal Khashoggi last year; the Supreme Court’s controversial February ruling against a Muslim death row inmate seeking to have an imam at his execution; and Trump’s July veto of congressional resolutions that sought to block his administration from selling weapons to Saudi Arabia and the United Arab Emirates without Congress’ approval. 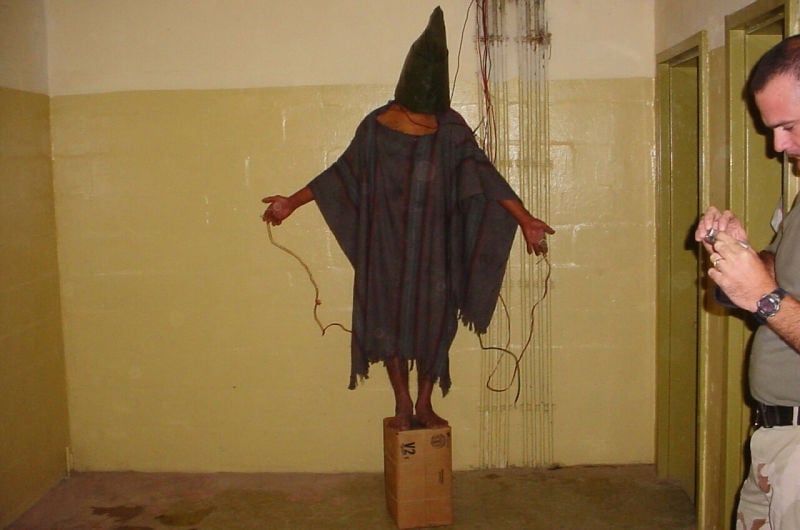 An image of a prisoner, Ali Shallal al-Qaisi, being tortured at Abu Ghraib prison in Iraq in 2003-2004. Photo courtesy of Creative Commons

As she illustrated the 100-plus events on the timeline with just a pencil, a black marker and white paper, Siddiqui said she was struck by just how “emotionally straining” the process was.

“Every single time I read one of the event’s descriptions, I would just be horrified,” she said. “I could have finished it earlier but it was so grim … it was difficult to read about these things that were happening to my people, to our ummah (community), and realize that this was planned.”

When viewers pair that language with her drawings, she said, they will walk away with a better understanding of how the war on terror has impacted Muslims.

But the timeline may also serve as a wakeup call for Muslims who have missed the global impact of the campaign against terrorism. 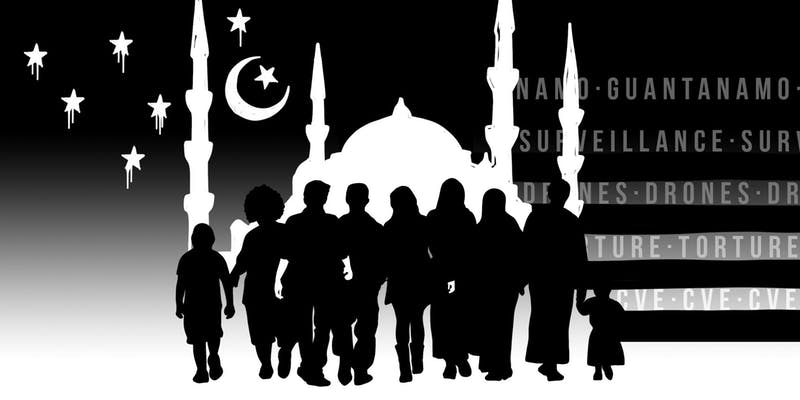 Hilal told Religion News Service that war on terror policies have created a “sense of hierarchy” and “false distinction” between the rights of U.S. citizens and noncitizens, so much so that most Muslim civil rights groups have left behind noncitizens in their advocacy, particularly detainees like those in Guantanamo Bay.

“Guantanamo sets the moral boundaries of what is considered acceptable treatment for Muslims,” Hilal said of the prison where dozens of detainees remain without charge. “When you have a place where the most egregious forms of torture have been utilized against Muslims, then anything less than that is considered almost benign.”

The work is equally critical for non-Muslim audiences and “all people who care about creating a more just world,” said the Rev. Erik Martínez Resly, who founded The Sanctuaries and oversaw the timeline’s production.

“People will understand and really feel the impact of these policies and the broader structure of Islamophobia on their lives and the lives of people that they know and love,” Martinez Resly said. “They’ll see that this isn’t just a set of abstract policies, but this viscerally impacts people’s lives in oftentimes violent and cruel ways. I hope, with the way we’re depicting it, they leave with a deepened sense of how this has been constructed and, by extension, how we can deconstruct it.”

“What’s striking is how much power the government wielded and how all these policies were put in place, and just caused so much trauma to Muslims in the name of protecting Americans,” said Dwyer, who designed the timeline. “And how much of it actually worked? Seems like not much.”