VATICAN CITY (RNS) — When 12 Greek Catholic bishops from Ukraine met with the Emeritus Pope Benedict XVI on Tuesday (Sept. 10), the retired pontiff invited them to be a force for unity in today’s “increasingly fractured and divided world.”

Benedict, and other Vatican leaders, had a particular part of the world in mind.

Located on the fault line between East and West, Ukraine is the epicenter of tensions that have not spared the region’s Catholic and Orthodox Christian churches.

But, strengthened by the ties forged in Rome in the past week, in which 47 bishops of the largest Eastern Catholic church met in Rome, including 10 from the U.S. and Canada, Ukraine’s Greek Catholics are poised to become the Vatican’s voice in Eastern Europe.

“He made a crown out of all the experiences we have lived in these days,” said Sviatoslav Shevchuk, archbishop of the Greek Catholic Church in Ukraine, of Benedict during a press conference at the Vatican the following day.

“The Emeritus Pope voiced his deep concern for the militarization of the Eastern Front,” Shevchuk said. “It awakens in him the bad memories of the time preceding the First and Second World Wars.” 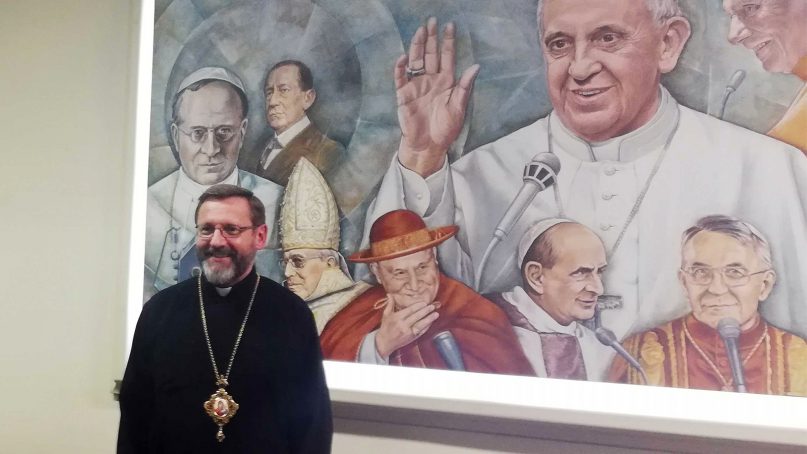 Archbishop Sviatoslav Shevchuk poses near a mural at the Vatican prior to a press conference. RNS photo by Claire Giangravé

The political situation in Ukraine escalated sharply in 2014 after Russia annexed Crimea and sent troops to support a rebellion in the eastern part of the country. Since then, a surge of violence, coupled with rising poverty levels and the ecological consequences of the 1986 Chernobyl disaster, have contributed to a brewing humanitarian crisis in Ukraine.

Despite lingering resentments from persecution under the Soviets, the Catholic community in Ukraine has already been influential in cooling tensions between Ukrainian nationalists and separatists loyal to Moscow.

On Sept. 7, Kyiv and the Kremlin exchanged 35 war prisoners, a deal that, Shevchuk maintains, would not have been possible without the intervention of the Catholic Ukrainian community.

“We collaborated at all levels to free the prisoners,” he said, while adding that “human life cannot be used as a bargaining chip.”

Over the summer, the Orthodox Church in Ukraine formalized its divorce from the Russian Patriarchate by declaring itself independent. It has been defined as one of the most important schisms in the Orthodox world in history, with major repercussions in Orthodox communities all over the world. More recently, the European Russian Orthodox, an independent archdiocese originally made up of exiles from Communism, voted on Sept. 7 in favor of aligning themselves with Russia.

As a Byzantine Rite church — a liturgical tradition they share with Orthodox Christianity — that is in communion with Rome, the Ukrainian Greek Catholics are well positioned to navigate these clashing loyalties. 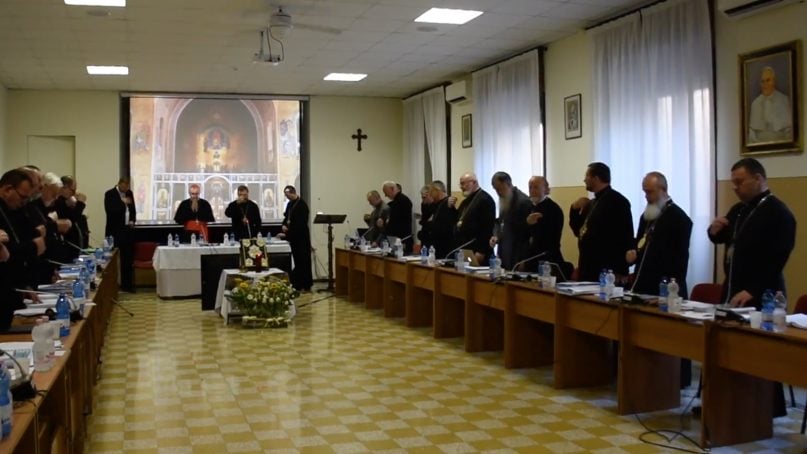 “While we have fraternal ties with the Orthodox churches and can’t be indifferent to their internal wounds, Shevchuk said, “we’ve never intruded on these painful Orthodox divisions.”

If the Greek Catholics can help make peace between the Orthodox churches, they may help realize a long-hoped-for dream of the secretariat of state: an invitation for a papal visit to Moscow from the Kremlin.

Francis has used synods of bishops from various Catholic communities to inject shots of adrenaline into the gatherings — or, as he would more likely call it, a shot of the Holy Spirit. This means promoting a lively debate, not being afraid to touch on hot-button issues and even argue, as Francis told the Greek Catholic bishops of Ukraine during an audience on Sept. 2.

The Greek Catholic bishops seem to have absorbed this spirit in their sojourn in Rome, but it remains to be seen if they can overcome the Eastern Catholic churches’ tendency in recent years toward rigidity and immovability, rather than dialogue and creativity. They will also be required to reach out as peacemakers to those who once oppressed them.

Meanwhile, the Greek Catholics are awaiting their own papal visit. Appeals have been steadily growing for Francis to recognize the thousands who have already lost their lives in the Ukrainian and Russian conflict. Such a visit, however, would risk angering Moscow and ruining hopes of a Kremlin-Vatican appeasement.

“Today the whole world is trying to find a diplomatic solution to the war; the papal visit could really lead to a cease fire today in Ukraine,” said Shevchuk, adding, “Every time we meet the Holy Father we remind him that Ukraine is waiting for him.”