(RNS) — The most often repeated story about religion and politics these days is the evangelical love affair with Donald Trump.

Virtually every week we get another story of how evangelicals love President Trump, no matter what he does. Pundits likewise offer much analysis of the reasons for evangelicals’ undying fidelity. New York magazine recently averred, for instance, that evangelicals like Trump because of his “hatefulness.” The Washington Post similarly advised “white evangelicals” that it was time to “panic” because they had sold their birthrights for a mess of Trumpism.

There is no doubt that certain Republican evangelical insiders, including Jerry Falwell Jr., Franklin Graham and First Baptist Dallas’ Robert Jeffress, have gone “all in” on Trumpism.

It’s true too that millions of practicing white evangelicals have seemingly gone with them. These white Christian traditionalists voted for Trump either as the “lesser of two evils” over Hillary Clinton, or out of genuine enthusiasm for the president. The 81% of self-identified evangelical white voters who supported Trump in 2016 are not a mirage. They reflect a reality about white evangelicals’ allegiance to Trump’s GOP.

Nevertheless, the vitriol of recent months has created misunderstandings about evangelicals themselves. To outsiders, it may seem as if Falwell, Graham and Jeffress define the evangelical movement. But the idea that Fox News-watching religious Republican voters are a stand-in for all evangelicals is ludicrous. The mere impression that they might encompass what it means to be an evangelical shows the paucity of our religious understanding and global insight. 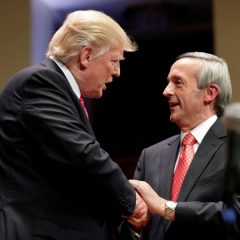 President Donald Trump, left, is greeted by Pastor Robert Jeffress of Dallas at the Celebrate Freedom Rally on July 1, 2017, in Washington, D.C. Photo by Yuri Gripas/Reuters

Author and speaker Beth Moore speaks during a panel on sexual abuse in the Southern Baptist Convention at the Birmingham-Jefferson Convention Complex in Birmingham, Alabama, on June 10, 2019. RNS photo by Adelle M. Banks

Even within white traditionalist evangelicalism, an outspoken group of leaders registered opposition to or grave concern about Trump in 2016. These included Russell Moore of the Southern Baptist Convention, John Piper of Desiring God Ministries and Beth Moore of Living Proof Ministries, all of them far more visible on the evangelical conference circuit than the Republican insiders.

This leads not only to misconceptions, but curious absences in news about evangelicals. Probably the most fascinating topic about evangelicals and politics is one rarely discussed: the allegiances of Hispanic evangelicals, who are up for grabs between the Republicans and Democrats. We don’t hear about them, in part, because polls often have no category for Latino Protestants (almost all of whom are evangelicals).

Another group of missing evangelicals  are the millions who do not vote, even in presidential elections. Though evangelicals have been more likely to vote than other Americans since 1980, a strong minority of evangelicals in America don’t vote at all, in spite of decades of brow-beating by Republican insiders who say that not voting is sinful.

Is a nonvoting evangelical still an evangelical? One would get the impression from coverage of evangelicals that the nonvoters are aberrant or nonexistent. This shows just how politicized our definition of “evangelical” has become. 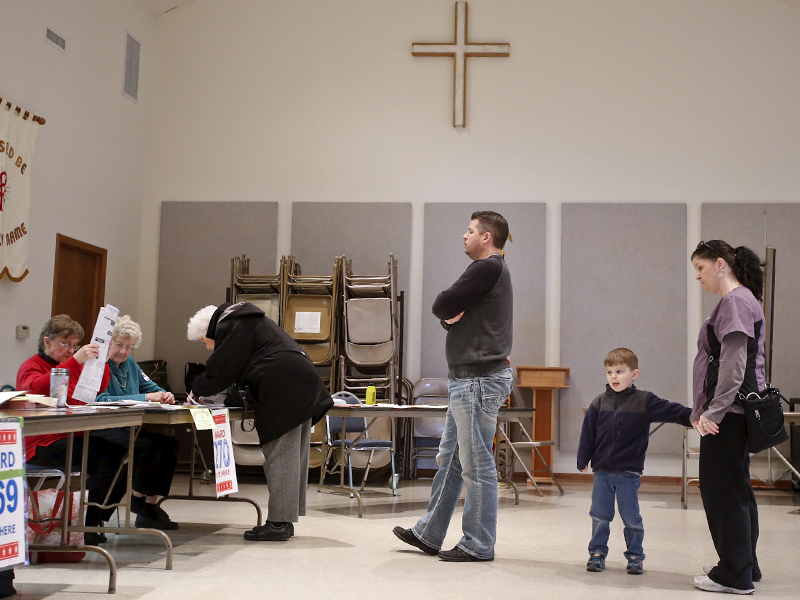 The absence of these evangelicals in the political debate points up a wider problem with polls: The internet and cellphones have gutted the efficacy of traditional polling. Landlines, and people willing to answer them, were essential to the heyday of American polling a half-century ago. Now they are vanishingly rare. Response rates of 80% to 90% used to be common for pollsters; 5% or less is now routine. Pollsters try to account for this deficit, but the people polled are rarely a representative sample in a traditional sense.

Even when a pollster gets someone on the line, the category “evangelical” itself is rather vague. Political polling about evangelicals, which began in 1976 with the candidacy of the born-again Jimmy Carter, has almost always depended on self-identification. Pollsters ask respondents if they are evangelical or born again (two terms that can get strikingly different results, depending on one’s ethnicity). If a person says “yes” to either, especially if they are white, then the pollster asks about the person’s political behavior.

It is uncommon for the pollster to ask what a respondent means by saying they’re evangelical or born again. Do they go to church? Which one? How did they become an evangelical? We usually don’t know.

When pollsters do match evangelical self-identification with denomination and attendance, oddities appear. For example, it has become standard for pollsters who do ask more probing religious questions to allow a category for “nonchurchgoing evangelicals.” And in spite of evangelicalism’s historic relationship with Protestant churches, you find small but notable populations of Catholics, Mormons and even Eastern Orthodox believers who say they are evangelicals.

The absurd outcome of these factors together is that a tiny slice of the global evangelical community — white, GOP-centered self-identified evangelicals — is now the image we have of the whole.

That slice, it must be said, looks nothing like what most of the world knows as an evangelical. On the global stage, evangelicals are thriving in Latin America, Africa and east Asia. (Even in America, the growth areas for evangelical and Pentecostal denominations are among Hispanic Americans and recent immigrants from Central America, the Caribbean and Africa.)

The political concerns of a Chinese house church attendee are far different from those of a white voter in Robert Jeffress’ congregation. Yet if we understand evangelicals as a spiritual category — as Christians who believe in being born again, the authority of the Bible and a believer’s daily walk with God — that Chinese believer is absolutely an evangelical. Such Chinese believers (and others like them around the world) represent the demographic future of global evangelical faith, a future that is not centered on Donald Trump’s GOP.

(Thomas S. Kidd is distinguished professor of history at Baylor University and the author of “Who Is an Evangelical? The History of a Movement in Crisis.” The views expressed in this commentary do not necessarily reflect those of Religion News Service.)