VATICAN CITY (RNS) — More than 40 million people today worldwide are considered to be “trafficked,” according to U.N. Crime Research Section data. Seventy percent of them are women and children.

A group of religious sisters is meeting this week in Rome to address the issue. They described human trafficking as a bane that is as widespread as it is resilient, stoutly resisting the broad and concerted efforts by the international community to put an end to this modern form of slavery.

“We must reframe the harsh realities of trafficking in our day and give it a hopeful future,” said Sister Gabriella Bottani, international coordinator of the Talitha Kum anti-trafficking network of Catholic men and women’s religious orders, during her opening speech Tuesday (Sept. 24) at the gathering in Rome.

At the meeting, the sisters made the case that it’s the small gestures, the private conversations and the whispered prayers that have the power to usher meaningful change, as they celebrated the 10 year mark of Talitha Kum’s fight against what they describe as an “ancient form of slavery in modern guise.”

“We are, in a sense, disciples of hope, knowing we can break through wherever there is despair and discouragement and bring life and light and a new future,” Bottani added, calling for a “worldwide network of tenderness, compassion and grace” to combat “the scourge of human trafficking.” 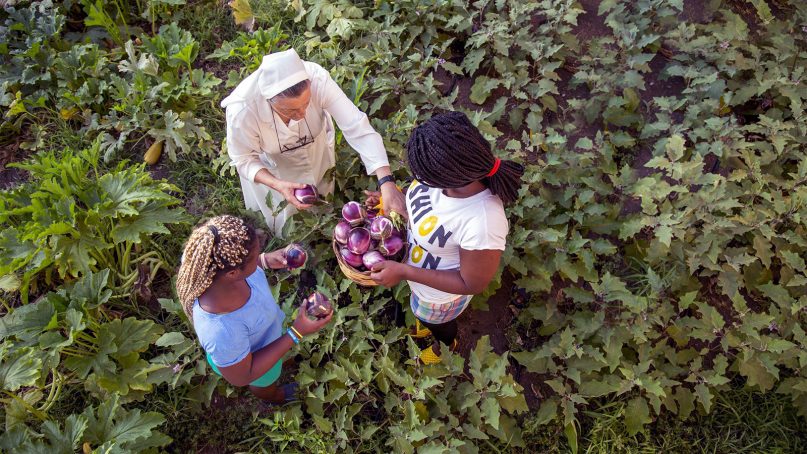 A nun with Talitha Kum works with women in Italy. Photo by Lisa Kristine, courtesy of Talitha Kum

Created in 2009, Talitha Kum is the brainchild of the International Union of Superiors General and leverages the day-to-day work of religious women and men in 92 countries, across five continents.

While the nuns themselves describe their work as small, a drop in the ocean that is the reality of the trade of human beings, it has garnered the attention of big players. In June, the U.S. State Department honored Bottani as a “hero” in the fight against human trafficking.

Pope Francis, a powerful advocate for the plight of immigrants and trafficked people, will meet with the 86 Talitha Kum delegates from 48 countries in a private audience at the Vatican on Thursday.

Human trafficking is often most associated with stories like that of Maryam, a Nigerian woman who was conned into coming to Italy for a job opportunity and instead found herself forced  into prostitution and a victim of sexual and psychological abuse. She was one of the 10 witnesses who came forward to tell their story at the gathering.

But the testimonies also included stories that take place closer to home, such as that of Sophia, from Belarus, who thought she had a ticket out of poverty when she fell in love in an online chatroom with a man living in the United States and decided to marry him.

“I slowly learned that ours was not a real marriage but a way to obtain money, a full-time housekeeper and a body on which to unleash aggression and anger,” she said in her testimony. A nun with Talitha Kum speaks with a female in Guatemala. Photo by Lisa Kristine, courtesy of Talitha Kum

Talitha Kum sisters helped both women escape from their situations and move on to new lives. Maryam is a mother and anti-trafficking activist today while Sophia is enrolled in university and obtained U.S. citizenship last year.

While rescuing victims of human trafficking is an important part of the work Talitha Kum does, the sisters hope their future work can also include prevention of trafficking in the first place.

“There is another great challenge, which is the demand for sexual exploitation,” said Maria Rosa Venturelli, who oversees Talitha Kum in Italy. “If the demand diminishes then we will see the trafficking diminish.”

This is a great taboo because there are international economic, diplomatic and high-level forces that are implicated in this corrupt and greed-oriented system, she said.

Additionally, Venturelli argued, current political climates and populist movements are putting a strain on their ability to serve the ever-growing number of vulnerable immigrants, including immigrants who have been trafficked.

Venturelli described witnessing firsthand the damaging effects caused by the eviction of trafficked African women out of Italy, a result of the decree of Italy’s right-wing populist movement led by former Deputy Prime Minister Matteo Salvini that required the deportation of many undocumented immigrants and the closing of all seaports to migrant vessels. Across the ocean in Colombia, Sister Ilse Villamar Cedeno said she is grappling with the increasing flux of immigrants fleeing poverty and hunger under the socialist leadership of Nicolàs Maduro in Venezuela, which has resulted in the emigration of more than 3 million people since 2015, according to the United Nations.

Policies such as these have created challenges for the religious sisters in Talitha Kum, but they said they are also increasingly concerned about immigration due to climate change. People who are fleeing their country are more at risk of becoming prey to human traffickers, Cedano said.

She said she is placing her hope in Pope Francis and the gathering of bishops in October to discuss the Pan Amazonian region, the care for the environment and immigrants.

The work of the religious sisters is small, “close to the people,” she said. But the upcoming synod at the Vatican has the chance to be something big: “I think this is a moment for all of us to raise awareness and look to the future.”

Christianity
Ancient home, prayer room open at Rome’s Baths of Caracalla
Follow us on Facebook!
Submit your photos to RNS