(RNS) — As Jews take their seats at Rosh Hashana services today, some will be handed a postcard addressed to U.S. Speaker of the House Nancy Pelosi, urging her to “resist President Trump’s cruel immigration policies.”

At other synagogues, Jews will be asked to consider the Jewish New Year as a period of environmental “teshuva,” the Hebrew word for repentance, by taking steps such as eating less meat and using less plastic.

These are just a few of the scores of social justice causes American Jews have taken up in the name of their faith over the past year, including calls to shut down Immigration and Customs Enforcement offices, demand gun control measures, address white nationalism, protect abortion rights and scores of other liberal agenda items.

They underscore a reality of American life: Jews lean liberal and vote with the Democratic Party. That reality has changed little, even as the Trump White House has attempted to peel Jewish voters away from the Democratic Party and as the left has indulged in anti-Semitic rhetoric.

In 2018, nearly 80% of Jewish voters cast ballots for Democratic candidates for the House of Representatives, according to exit polls. Jews strongly supported Hillary Clinton in the 2016 presidential campaign, preferring the Democratic candidate by 71%. President Donald Trump earned only 24% of their vote. Those results continue a trend that is at least two decades old, Pew Research surveys show.

If anything, some polls indicate, Trump’s efforts to accuse Jewish voters of disloyalty if they voted for Democrats will likely backfire. (“If you want to vote Democrat, you are being very disloyal to Jewish people and very disloyal to Israel,” Trump said on Aug. 21.) 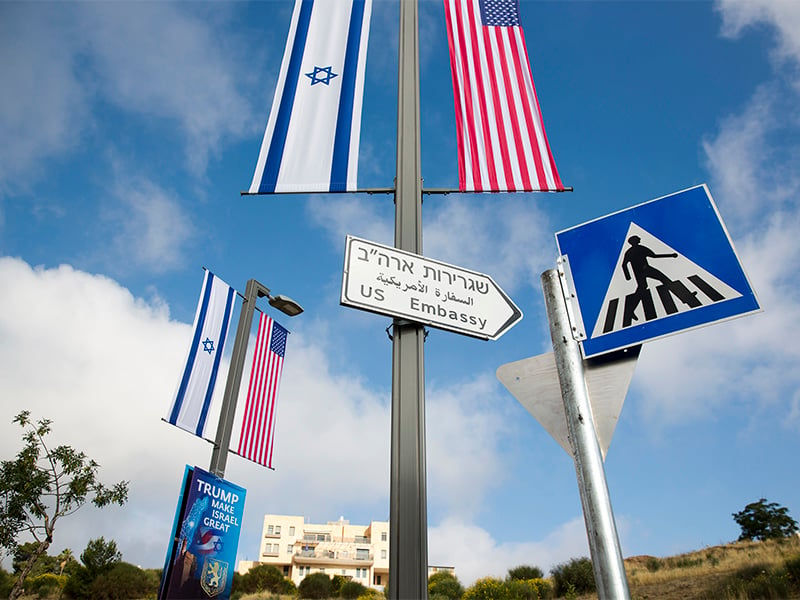 A road sign leading to the new U.S. Embassy is seen ahead of the official opening in Jerusalem, on May 13, 2018.  (AP Photo/Ariel Schalit)

Forty-two percent of American Jews said they thought Trump is favoring the Israelis too much, according to a recent Pew poll. With obvious exceptions, especially among Orthodox Jews, American Jews do not think Trump’s recent actions on behalf of Israel, which include moving the U.S. embassy from Tel Aviv to Jerusalem and recognizing Israels’s sovereignty over the Golan Heights region, are the right way to help the Jewish state.

“Jews believe it’s the secularity of the state as they understand it that makes the difference,” said Kenneth Wald, an emeritus professor of political science at the University of Florida and the author of “The Foundations of American Jewish Liberalism.”

“They get very aroused when anything comes out that suggests this is a Christian country,” he added. “That’s been a fundamental problem with the Republicans. They’re now associated with this notion of the United States as a Christian nation.”

Others agree that strong support for separation of church and state guides American Jewish leanings, but they say anti-Semitism may be an even bigger factor these days. Following the massacre of 11 Jews at the Tree of Life Synagogue in Pittsburgh last October and the shooting inside the Chabad of Poway, California, synagogue in April that killed one woman and injured two others, security measures are high as Jews flock to High Holy Day services this year.

Beginning Sunday evening with the start of the 10 “Days of Awe,” some Jews will be walking through metal detectors for the first time. Others will notice security cameras, a beefed up police presence, even undercover Israeli security agents.

That, too, has apparently only strengthened Jewish liberal leanings.

“Most Jews associate President Trump with the increase in anti-Semitism since the 2016 election,” said Herbert Weisberg, emeritus professor of political science at the Ohio State University. “It’s not that he’s anti-Semitic, but he gives the green light for anti-Semites to act on their views.”

Trump’s defense of white nationalists at the 2017 “Unite the Right” rally in Charlottesville  — “You also had some very fine people on both sides,” he said — may have permanently tarnished his image among many Jews.

Some protested the president’s visit to Pittsburgh after the shooting, claiming he shared responsibility for the attack. 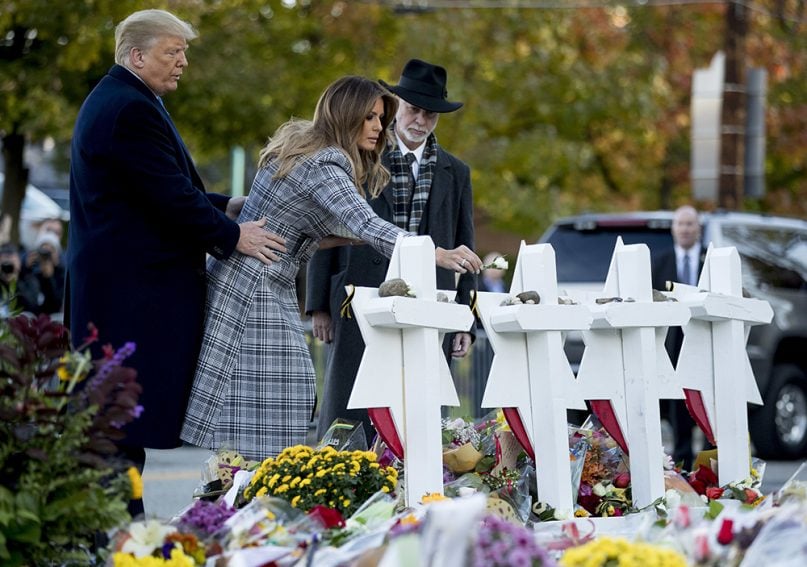 First lady Melania Trump, accompanied by President Donald Trump, and Tree of Life Rabbi Jeffrey Myers, right, puts down a white flower at a memorial for those killed at the Tree of Life Synagogue in Pittsburgh, on Oct. 30, 2018. (AP Photo/Andrew Harnik)

But concern is growing among many Jews about what they perceive to be anti-Semitic comments by U.S. Reps. Ilhan Omar and Rashida Tlaib, the two Democratic legislators who are both Muslim, for their support for the Boycott, Divestment and Sanctions movement aimed at Israel. The congresswomen’s perceived anti-Semitism has become part of Trump’s strategy to divide Jews by suggesting that only the Republican Party will protect them.

If the eventual Democratic Party candidate for president takes a tough stand on Israel’s policy, said Lauren B. Strauss, professor of modern Jewish history at American University, “I’m wondering if that will push people away from voting Democratic and toward ideals and policies that are still seen as more conservative and less civil libertarian.”

Movements on the left such as T’ruah: The Rabbinic Call for Human Rights, which sponsored the postcard campaign to Nancy Pelosi, and other new groups, such as Never Again Action, which has led close to 40 protests intended to shut down ICE, do not represent the majority of American Jews, Strauss said, who are not as liberal as they may seem. 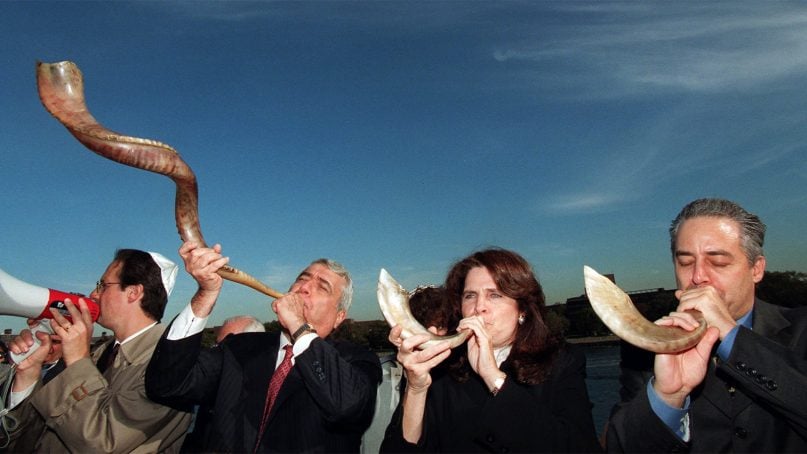 Blowing the shofar during Rosh Hashana is one of the holiday’s many traditions. (AP Photo/Emile Wamsteker)

But so far the GOP hasn’t convinced many Jews, who see anti-Semitism on the right — from white supremacists — as a far greater threat. Indeed, last week the Trump administration gave Jews more reason to swing left by announcing it would slash refugee admissions to 18,000, the lowest in nearly four decades.

The Religious Action Center of Reform Judaism, the lobbying arm of the nation’s largest Jewish denomination, swiftly denounced the move, calling it shameful. Other groups have cited the immigrant history of most American Jews as a reason to stand in solidarity with those fleeing war, poverty and discrimination today.

Which is why many Jews will be mailing postcards to Nancy Pelosi.

Rabbi Michael Rothbaum, of Congregation Beth Elohim in Acton, Massachusetts, 25 miles northwest of Boston, came up with the postcard project. To date, about 30,000 have been mailed to various synagogues across the country.

“How do we get involved?” asked Rothbaum, who leads a non-denominational synagogue, “Here’s an easy way. Sign a postcard. Because of our history as an immigrant people and because of our texts, this is a no-brainer.”