(RNS) — Pope Francis met one on one with American Jesuit priest James Martin at the Vatican on Monday (Sept. 30) to discuss LGBTQ Catholics, a move some advocates say is a signal of support for a priest who has come under fire for calling on Catholics to be more compassionate to LGBTQ people.

“It was amazing and very consoling,” Martin said of the meeting in an interview with Religion News Service. “The conversation went very easily and focused mainly on ministry to LGBT Catholics, which (Francis) was happy to talk about. … I spent 30 minutes with a warm and compassionate pastor.”

Martin would not discuss details of his conversation with the pontiff, which took place at the pope’s private library, where Francis often meets heads of state. But Martin insisted that he lifted up the concerns of LGBTQ Catholics during the 30-minute discussion.

“I brought into that room the joys and the hopes and the struggles and the challenges of LGBT Catholics and LGBT people worldwide,” Martin said of the meeting, which was his first private audience with any pope.

Martin explained that the audience — which featured only himself, Francis, and a translator — happened at the invitation of the pope. According to Martin, Francis told the American Jesuit priest, “I want to have an audience with you,” after the two met briefly in Rome during a meeting with the Vatican’s Dicastery for Communication, for which Martin serves as a consultant. The next day Martin received a formal invitation to meet with the pontiff.

Martin said that initiating such a meeting, which was sandwiched between meetings with bishops and a dicastery, “shows (Francis’) concern for LGBT people.” 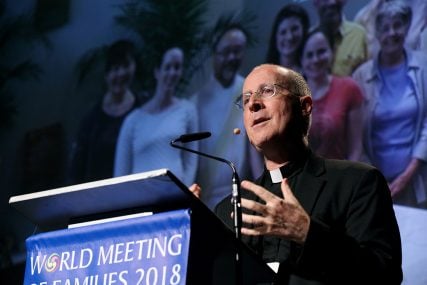 The Rev. James Martin gives a talk entitled, ‘Showing Welcome and Respect in our parishes for LGBT people and their families’ at the Pastoral Congress for the World Meeting of Families 2018 in Dublin on Aug. 23, 2018. Photo by Jonn McElroy on behalf of WMOF 2018

The meeting is also significant for Martin, whose 2017 book “Building a Bridge: How the Catholic Church and the LGBT Community Can Enter into a Relationship of Respect, Compassion, and Sensitivity” stoked controversy among American Catholics, particularly conservatives. Although the book was endorsed by some Catholic bishops and, according to Martin, stayed well within the Catholic Church’s historically conservative teachings about sexuality, he was disinvited from speaking engagements at Catholic institutions to promote the book, and the website LifeSite News called for him to be removed as a Vatican advisor.

Michael Voris, the head of the conservative Catholic website Church Militant, also attacked Martin, calling him a “homosexualist” and a “heretic” in 2017.

Asked about the personal significance of his meeting with Francis, Martin said, “It means everything to me,” adding that the meeting itself was “consoling, inspiring and encouraging” for his work moving forward.

“The meeting was warm and friendly and punctuated by laughter from time to time,” he said.

Pope Francis has had an uneven legacy with LGBTQ activists in the United States. He made headlines in 2013 shortly after becoming pope for responding to a question about gay priests by saying, “who am I to judge,” but has since drawn criticism for not doing more to shift church teaching, which refers to “homosexual tendencies” as “objectively disordered.”

The Human Rights Campaign, for example, has declared the pope “complicated for LGBTQ people.”

Even so, New Ways Ministry, a group that “advocates for justice and equality for … (LGBTQ) Catholics,” celebrated Francis’ meeting with Martin in a statement on Monday morning.

“(The meeting) recognizes that Fr. Martin’s approach to LGBTQ pastoral ministry, already praised by bishops, archbishops, and cardinals, has won the approval of the highest levels of the church,” read the statement from Francis DeBernardo, the group’s executive director. “It is a clear signal that Pope Francis is calling the church to conversion away from the negative messages it has sent in the past about LGBTQ people. It is a day of celebration for LGBTQ Catholics who have longed for an outstretched hand of welcome from the church that they love.”

Martin said he also presented the pope with a note from his 14-year-old nephew, who is taking the name Francis for his confirmation. Martin said the pope wrote a note back.