DALLAS (RNS) — On Thursday (Oct. 3), members of the Southern Baptist Convention kicked off a three-day summit focused on confronting sexual abuse, with church leaders and abuse survivors calling for the rejection of a religious cultures that can perpetuate abuse and for new systems to protect the vulnerable.

Hundreds of pastors and SBC members filled the sprawling meeting room at the “Caring Well” conference, organized by the denomination’s Ethics and Religious Liberty Commission. They will hear addresses from church leaders, attorneys, prominent advocates for abuse survivors and survivors themselves in the wake of several high-profile sexual abuse scandals that have rocked the SBC over the past two years.

“This is the time, normally, at one of our conferences (when) I would say how glad we are to have you here,” said Phillip Bethancourt, the ERLC’s executive vice president, as the conference began. “But the key emotion we’re feeling right now is not one of gladness, but grief.” 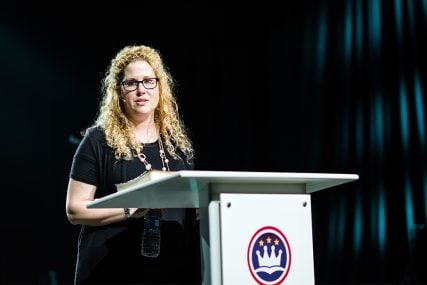 Megan Lively speaks at the Caring Well conference in Dallas on Oct. 3, 2019. Photo by Karen Race Photography, courtesy of ERLC

Among the speakers on the meeting’s opening day was Megan Lively, who last year charged that her allegations of rape made while she was a student at Southeastern Baptist Theological Seminary in 2003 were mishandled by its then president, Paige Patterson. Patterson was forced from his post at Southwestern Baptist Theological Seminary in May of 2018.

Public awareness of the issue broadened in February, when the Houston Chronicle unveiled the results of an investigation into widespread sexual abuse in SBC churches. The Chronicle identified some 700 victims over the course of 20 years, some of whom had reported their abuse and were urged to forgive their abusers or get abortions.

“To Southern Baptist leaders, it was a problem to be silenced,” Lively said, as she tearfully recounted her story to the packed conference hall.

Lively was one of several women who told stories of abuse within the church on Thursday.

Kay Warren, wife of prominent evangelical pastor Rick Warren and co-founder of Saddleback Church in California, revealed that she had been sexually abused by a teenage boy at her church when she was six years old. She said the psychological toll of the abuse haunted her in different ways over the course of her life, impacting her marriage and how she grieved the death of her son, who committed suicide in 2013.

“I’ve discovered that further trauma unleashes some of the old trauma,” she said, adding that her son’s death “reawakened some of the trauma responses.”

Warren and other survivors who spoke at the conference did not gloss over the impact of abuse but often mixed their accounts with faith-driven hope. Jackie Hill Perry, a poet, writer and artist, defiantly proclaimed during her own story of abuse that “in heaven, there will be a man that has never taken advantage of me,” referring to Jesus, adding that “trauma will not have the final say.” 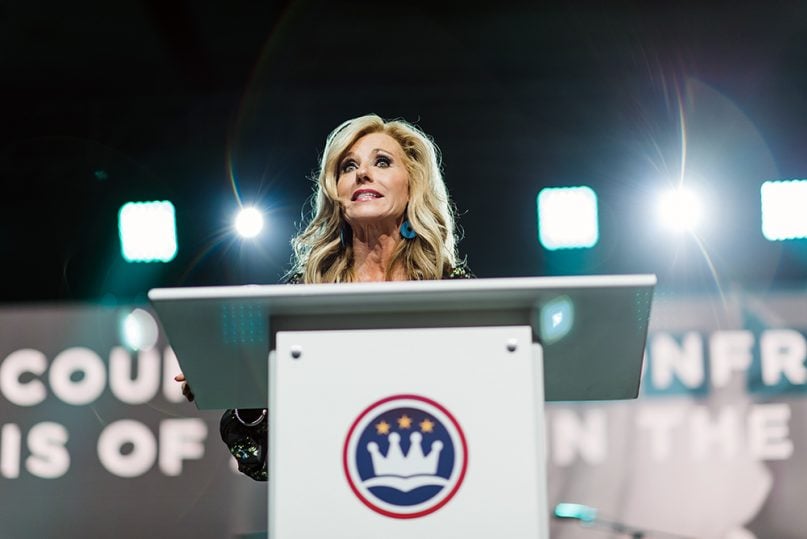 Beth Moore speaks at the Caring Well conference in Dallas on Oct. 3, 2019. Photo by Karen Race Photography, courtesy of ERLC

Prominent Southern Baptist author Beth Moore, who has previously discussed her own experience with childhood sexual abuse, suggested that certain kinds of theology can bolster a culture of abuse. She questioned the widespread embrace in the SBC of complementarianism, a conservative belief that women and men serve different but complementary purposes in the church.

That concept, Moore said, has been used to disempower women in church business and in their church relationships. As a result, Moore said, when girls or women are abused, they “don’t even have a female to turn to” who could shelter and help the victim. Instead, women are told simply to trust powerful men but that “those who cannot be questioned, cannot be trusted.”

“Does complementarian theology cause abuse? The answer is no,” said Moore. “Sin and gross selfishness in the human heart cause abuse. Demonic influences cause abuse. However, has a culture prevalent in various circles of the SBC formed and burgeoned out of (complementarianism) contributed to it? Absolutely — and heavily.”

At the conclusion of every victim’s story, the crowd rose to their feet to applaud.

Southern Baptist officials also spoke, including ERLC President Russell Moore. In his opening keynote, he invoked a New Testament passage in which Jesus refers to believers as sheep among wolves. Moore argued that sheep-like vulnerability is core to Christian life and that perceived invulnerability can lead to abusive acts.

“One of the major drivers of church sexual abuse is this sense of invulnerability … this sense of, ‘This couldn’t happen in our church,’” he said.

He also condemned those who might be reluctant to prioritize ending sexual abuse in the SBC, noting that right-believing leaders are capable of overlooking abuse or even being abusers.

“There are many people, who have perfectly orthodox theology, behind which they hide horrible, horrible behavior,” he said.

In an interview with Religion News Service, he explained that the ERLC leadership, having met with “uncountable” numbers of victims, plans to equip and train individual churches to properly address abuse.

The training, he said, would be aimed at “helping churches to think through how to deal with prevention (and) response, having proper policies in place to respond and then to administer and to care for survivors.” The organization, he said, is preparing a “Caring Well” curriculum for churches.

But he stressed that no single program will replace vigilance. “Sometimes churches assume, ‘Well, let’s vote on a series of policies. Now we have this fixed and now we move forward,’” he said. “That’s not how this works. It takes constant attention.”

The Rev. Moore said his group had talked with leaders from other religious traditions who are also struggling to address the abuse crisis. He observed, however, that the SBC’s highly decentralized structure presents both opportunities and challenges.

At a panel discussion later in the day, Amy Whitfield, director of communications at Southeastern Baptist Theological Seminary, also highlighted the difficulty of creating a single ethic in a denomination based on the autonomy of its individual congregations. But, she argued, “Autonomy does not absolve us from accountability.” 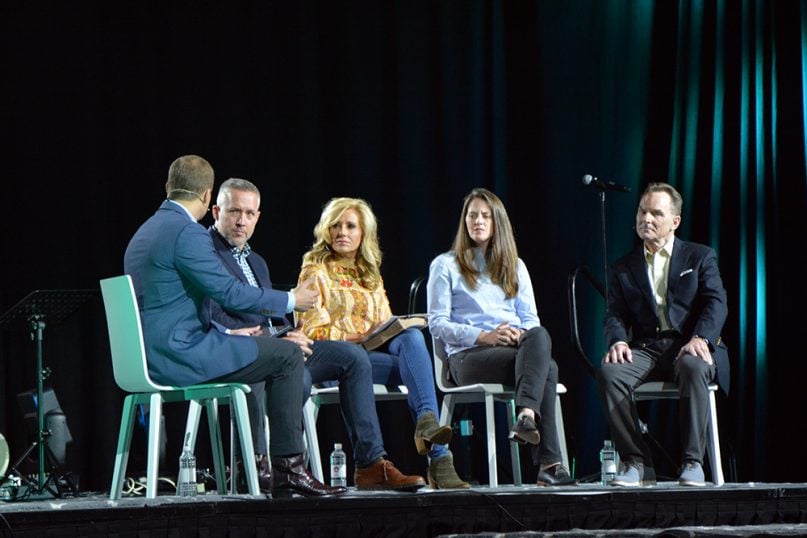 But some critics have said that the SBC has avoided basic reforms, such as the creation of a database of pastors and other church personnel who have been credibly accused of abuse.

The Survivors Network of those Abused by Priests, or SNAP, an organization that has played a prominent role in the Catholic sex abuse crisis, issued a statement ahead of the conference, accusing the SBC of “following the playbook of the Catholic Church when it comes to their response to abuse within their churches.”

“Rather than listen to survivors, they instead choose to discuss reform amongst themselves, proudly announce internal investigations, and then conclude those investigations quickly while proclaiming victory,” reads the statement.

J.D. Greear, president of the SBC, seemed aware that the SBC’s response to abuse is being carefully watched, saying, “For many years we felt this was only a Catholic problem. It should most properly be seen as a depravity problem.”

In his address, he urged all SBC congregations to adopt the Caring Well Challenge, an eight-step program developed by the SBC based on the Caring Well curriculum, and dedicate the May 3rd Sunday services to the issue of abuse.

Similarly, those called on to address the conference also repeatedly insisted that the gathering is only the beginning and that tackling sexual abuse in the church must be a long-term commitment.

“This is until Jesus comes back,” said Beth Moore.