ERFURT, Germany (RNS) — “Here I stand, I cannot do otherwise.”

Martin Luther’s defiant declaration to Catholic Church leaders in 1521, as he set off the Protestant Reformation, is treasured in Germany as a motto of virtuous subversion. Now church officials and other political groups are taking a stand against attempts by the far right National Democratic Party, or NPD, to co-opt Luther’s words as a campaign slogan.

For the second straight election in the central German state of Thuringia, the NPD has put up posters incorporating the famous portrait of Luther by Lucas Cranach; instead of “Here I stand,” the rebel monk is depicted saying, “I would vote NPD, I cannot do otherwise,” alongside the party’s slogan “defend the homeland.”

The NPD, classified as a neo-Nazi party by the Counter Extremism Project, has used Luther’s image in previous German state and national elections. In 2017, Christoph Meyns, the Lutheran bishop in Braunschweig, to the north of Thuringia,  told the German news agency DPA that the posters were “intolerable” political distortions of Luther and his message. The cathedral in Erfurt, the capital of Thuringia. RNS photo by Ken Chitwood

The posters’ appearance before the Oct. 27 vote in Thuringia have renewed the controversy in a place where Luther was ordained and lived as a monk. The dust-up has also exposed the region as a home to nationalist sentiments, dredging up Luther’s own muddied legacy in regard to xenophobia and anti-Semitism.

Thuringia’s 2014 elections saw a coalition made up of the progressive Left Party, the Social Democrats and the Greens oust Angela Merkel’s Christian Democratic Union, which had long held sway in the state. The NPD gained just 3.6% of the vote then, failing to gain any seats in the state Parliament. 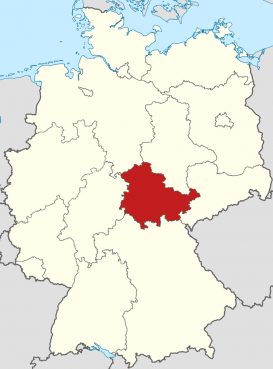 Current polls show the same coalition falling short of a majority, in part due to the increasing support for another right-wing party, Alternative for Germany, or AfD. After a breakout success nationwide in 2014, the AfD has continued its steady rise in German politics and looks like it may come in second in Thuringia, beating out Merkel’s CDU.

A 2018 study from Friedrich-Schiller University Jena found that 19% of respondents in Thuringia agreed with extreme right-wing statements such as “National Socialism also had its good sides.” Ethnocentric statements such as “the foreigners come here only to take advantage of our welfare state” or that Germany is oversaturated “by the many foreigners to a dangerous extent” found support from 39% of respondents.

Just 8% of respondents statewide agreed with explicitly neo-Nazi statements, but in some districts, such as Eisenach, another landmark of “Luther country” — it was in the town’s Wartburg castle that he holed up while resisting the established church power — neo-Nazi sentiments have found broader accord.

Eisenach is currently playing host to the Achava Festival of Jewish culture, and the museum Lutherhaus is featuring a special exhibit on the Protestant church’s “In­sti­tute for the Study and Eradi­cation of Jew­ish In­fluence on Ger­man Church Life” founded in Ei­senach in 1939.

Alexandra Husemeyer of the Lutherhaus Eisenach Foundation said that the foundation’s efforts at addressing anti-Semitism have not met with specific resistance from far right groups or neo-Nazis in the area. “While there are four members of the NPD and four members of the AfD in the city council, there have been no reactions from them” thus far, she said.

She is, however, familiar with the controversial election posters, and she uses the foundation’s museum to teach visitors about the political co-option of Luther across time, including his influence on National Socialism. (Husemeyer is proud to speak of Luther’s positive impact on Western culture, from the modern German language to Monty Python’s film “The Meaning of Life.”) A bust of Martin Luther in Eisleben, Germany, where he preached a series of sermons “warning against the Jews.” RNS photo by Ken Chitwood

In his infamous 1543 treatise “On the Jews and Their Lies,” Luther called for the burning of Jewish synagogues, the confiscation of Jewish prayer books and Talmudic writings, and the expulsion of Jews from cities.

Christopher Probst, author of “Demonizing the Jews: Luther and the Protestant Church in Nazi Germany,” said that while Luther’s “sociopolitical suggestions were largely ignored by political leaders of his day,” during the Third Reich “a large number of Protestant pastors, bishops, and theologians of varying theological persuasions utilized Luther’s writings about Jews and Judaism with great effectiveness to reinforce the anti-Semitism (that was) already present in substantial degrees.”

Probst added: “The NPD’s present usage of both Luther’s image and, more implicitly, his often implacable attitude toward Jews and others fits rather neatly with the views of those German Protestants who were sympathetic to and even supportive of Nazism 80 years ago.”

Probst said that Luther’s anti-Semitism and its impact across Germany are too often downplayed. While “it is impossible to say whether or not Luther would vote today for a far right, ultranationalist party such as the NPD,” he said, “the posters no doubt resonate with some who both revere Luther and — unlike the great majority of Germans, including German Protestants — have no place for ‘foreigners’ in their homeland.”

Many present day German Protestants are having none of it. 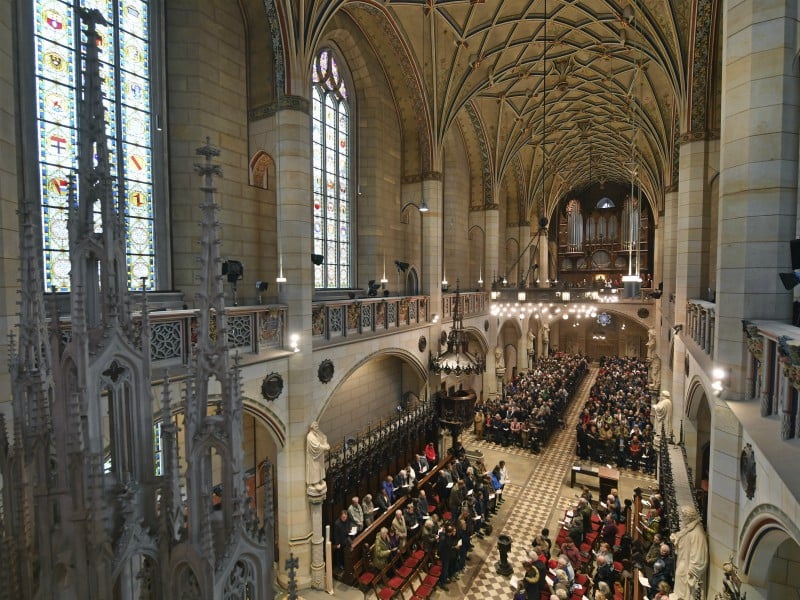 Visitors pack All Saints’ Church, or Castle Church, in Lutherstadt-Wittenberg, Germany, on Oct. 31, 2017. Castle Church is where Martin Luther is buried and the journey of the Reformation began. (Hendrik Schmidt/dpa via AP)

The superintendent of the church in Lutherstadt-Wittenberg, Christian Beuchel, who called the NPD “inhuman,” said the posters abuse the image of a man who gave people dignity through his “rediscovery of God’s grace.”

“Many Germans,” Probst said, “and Thuringians in particular, take great pride in the place that their Heimat (homeland) played in the Reformation.”

Today, the question remains which part of Luther’s legacy will have the greater impact on the upcoming election.

Probst said that Thuringians, Protestants and Germans as a whole need to come to terms with the prejudice that the NPD promotes and that Luther espoused at times.

“The most prominent figure of the German Protestant Reformation, Luther was indeed a remarkable man,” he said. “Yet Luther was also an anti-Semite. It is this deeply complex legacy, I think, that sparks such potent reactions.”