Susan B. Anthony’s conviction that all people were equal under God was an inheritance from her upbringing in the Society of Friends, better known as the Quakers. A temperance campaigner and abolitionist in her early career, Anthony had by the late 1860s begun to focus on women’s rights. With her friend and fellow activist Elizabeth Cady Stanton, she founded the National American Woman Suffrage Association that later became the League of Women Voters.

In 1872, the 52-year-old Susan B. Anthony voted in her hometown of Rochester, New York. She was brought to trial for her “crime” and found guilty, but she refused to pay the $100 fine (about $2,000 in today’s dollars), and the prosecution dropped the case. 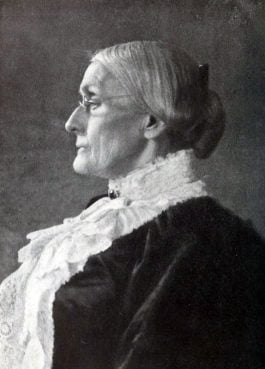 Susan B. Anthony in 1900. Image courtesy of Creative Commons

Anthony’s struggle for the ballot box was never easy in a male-dominated society that had curtailed women’s right to vote since our nation’s beginnings. But she had remarkable courage and an unshakable commitment to transform the role of women in society.

“We shall someday be heeded,” Anthony wrote. “Everybody will think (women’s suffrage) was always so … They have no idea of how every single inch of ground that (a woman) stands upon today has been gained by the hard work of some little handful of women of the past.”

Fourteen years after her death, the 19th Amendment was ratified, enshrining in the Constitution women’s right to vote.

Emma Goldman also championed female empowerment for more than 50 years, as well as freedom of speech, the right to organize and a host of other unpopular causes. A fiery public orator, called “the most dangerous woman in America” by law enforcement officials and political leaders, Goldman was an anarchist who attracted large enthusiastic crowds wherever she spoke in America. She was a political “rock star” who always received wide press coverage.

She was born in anti-Semitic Tsarist-controlled Lithuania in 1869 and came with her Orthodox Jewish family to America when she was 16 years old. Beginning in her mid-20s, she was jailed repeatedly on charges ranging from incitement to riot to advocating birth control.

In 1917, as President Woodrow Wilson led America into World War I, promising to “make the world safe for democracy,” Goldman publicly denounced the president, who strongly supported racial segregation. She criticized the numerous Jim Crow laws of the time, the lack of women’s suffrage and the deeply embedded prejudice against ethnic, religious and racial minorities in the U.S. 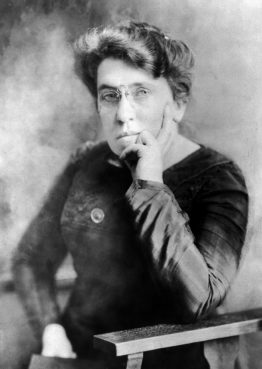 “If America has entered the war to make the world safe for democracy,” she declared, “she must first make democracy safe in America. How else is the world to take America seriously, when democracy at home is daily being outraged, free speech suppressed, peaceable assemblies broken up … and every independent opinion gagged? Verily, poor as we are in democracy, how can we give of it to the world?”

In 1920, in a face-to-face meeting in Moscow with the Soviet leader, Vladimir Lenin, Goldman asked about fellow anarchists who, she had learned, were in prison and about a lack of press freedom. Lenin replied, “Free speech is, of course, a bourgeois notion.”

The fearless Goldman then questioned Lenin why the Communist elites were well fed and well clothed while she personally witnessed so much of the Russian population starving and ill clothed. Lenin had no satisfactory answer.

For the next 20 years, Emma Goldman continued writing and speaking in Europe and Canada. After her death in Toronto in 1940, American officials allowed her to be buried in a Chicago-area cemetery.

Margaret Sanger, ten years younger than Goldman, was a trained nurse who demanded that a woman must be “… the mistress of her body.” A public health pioneer, she coined the term “birth control” and was a prominent leader in that movement. 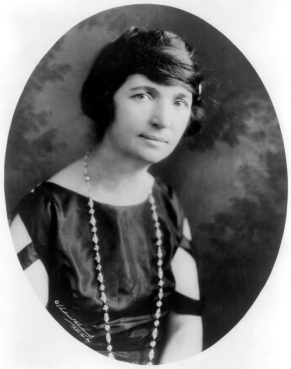 Born into a large Roman Catholic family, Sanger purposely defied the church’s opposition to birth control in order to publicize her movement. In doing so, some historians say, she helped the church define its policy about contraception.

Sanger still remains controversial. Critics charge that she endorsed eugenics, a racist theory that in some versions favored the success of European people over others. Supporters praise her as a pioneering defender of women’s reproductive rights. She believed abortions, while sometimes justified, should generally be avoided, and contraception was the only way to prevent them.

Sanger wrote: “We hold that children should be (1) Conceived in love; (2) Born of the mother’s conscious desire; (3) And only begotten under conditions which render possible the heritage of health. Therefore we hold that every woman must possess the power and freedom to prevent conception except when these conditions can be satisfied.”

A significant part of Sanger’s legacy includes her founding of the Birth Control Federation of America that is better known today as the Planned Parenthood Federation.

In 1914, Sanger was arrested for disobeying the Comstock Act of 1873, which banned as “obscene and immoral” any advertisements or literature relating to contraception. Sanger fled to Britain to escape further prosecution. When the case against her was dropped, she returned to the U.S.

Back home, Sanger worked for women’s rights and safe birth control even as she faced public criticism and a later series of arrests. But, like Anthony and Goldman, she “persisted.”

These three women — a Quaker, a Jew and a Roman Catholic — were polarizing figures who were often propelled by their faith into history. Though they attracted strong supporters and vigorous opponents, these remarkable activists continue to influence today’s multi-racial, multi-religious and multi-ethnic America.