NAIROBI, Kenya (RNS) — As a Christian, he went to church and participated in Bible studies, but after becoming an atheist, Harrison Mumia is now demanding that the Quakers remove him from their rolls.

Mumia, president of the 5-year-old Atheists in Kenya Society, applied to the church to cancel his membership and remove any records associated with him, since he no longer considers himself a Christian.

“I want to adopt a Luhya name,” the 41-year-old information technology expert told Religion News Service, referring to his ethnic tribe. “I don’t see why I should hold on to something that I don’t believe in.”

In his an Oct. 17 letter to the Religious Society of Friends, as the Quakers are officially known, Mumia wrote, “I request for an official certificate of renunciation signed by a senior member of the Quakers Church in Kenya to be issued to me as a confirmation that my request has been accepted.”

Though most Quakers don’t practice water baptism, Mumia recalls being sprinkled with water as a young teen, and in his letter he specifically renounced its effect. “As an atheist,” he wrote, “I no longer accept the implications of the rite of baptism.”

Baptism, he told RNS, “is a religious rite of passage for most children. When my mother took me for baptism, she believed this was the right thing to do, but I was not a grown-up.”

Mumia said he stopped believing in God when he was a 24-year-old university student. He had failed to find sufficient and convincing answers to his questions about morality, creation and faith in the holy texts. When science provided more convincing answers, he made the shift.

Quakerism reached Kenya in 1902 via two American missionaries, and while its numbers have declined elsewhere in the world, the church has been growing here. According to Religion Watch, a third (146,000) of the denomination’s 377,000 members worldwide lived in Kenya as of 2012.

Overall, some 83% of Kenyans are Christians, with 45% saying they are Protestants and 33% being Catholic, according to a Kenya National Bureau of Statistics study in 2013. Muslims make up about 10% of the population.

But atheism is gaining ground. In 2016, in part at Mumia’s instigation, the government registered the Atheists in Kenya Society, bringing an outcry from Christian leaders. 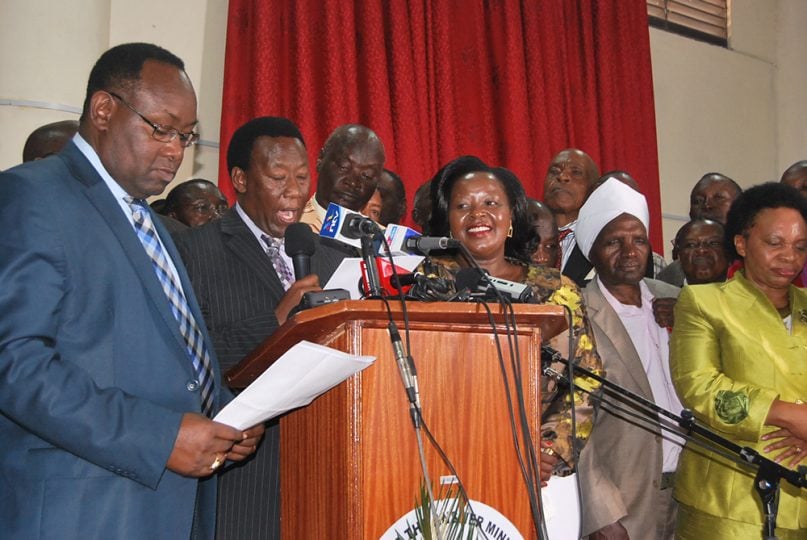 At the time, Stephen Ndicho, vice chairman of the Kenyan National Congress of Pentecostal Churches and Ministries, said his members were disgusted at the Kenyan attorney general’s casual handling of religious issues. After pressure from religious leaders convinced the government to suspend the organization, AIK went to court and in February 2018 the atheists’ official status was restored.

The atheist group, which points to the nearly 2.5% of Kenyans who report having no religion or specify no affiliation, wants the country to adopt science and skepticism in its affairs and have a rational and humanistic approach to morality, according to Mumia.

The Quakers have not responded to Mumia’s letter, but a senior leader in the church said in an interview that the former member was “rebellious” and had lost his membership when he left the fold.

“He lost it long time ago. He never attends church. He stopped paying tithes,” said Pastor Nathan Musingo Lihanda, the church’s assistant general superintendent for the Nairobi area. “Salvation is not automatic, neither is it by force, but it has to be sustained.”

Lihanda explained that the church does give letters to its congregants who want to renounce membership but normally it is for those who want to move to other churches.

Still, Mumia said he was determined to end his relationship with the church and promised to keep writing if the officials do not respond to his letter. He also added, “There are still other options to ensure that I get official renunciation.”