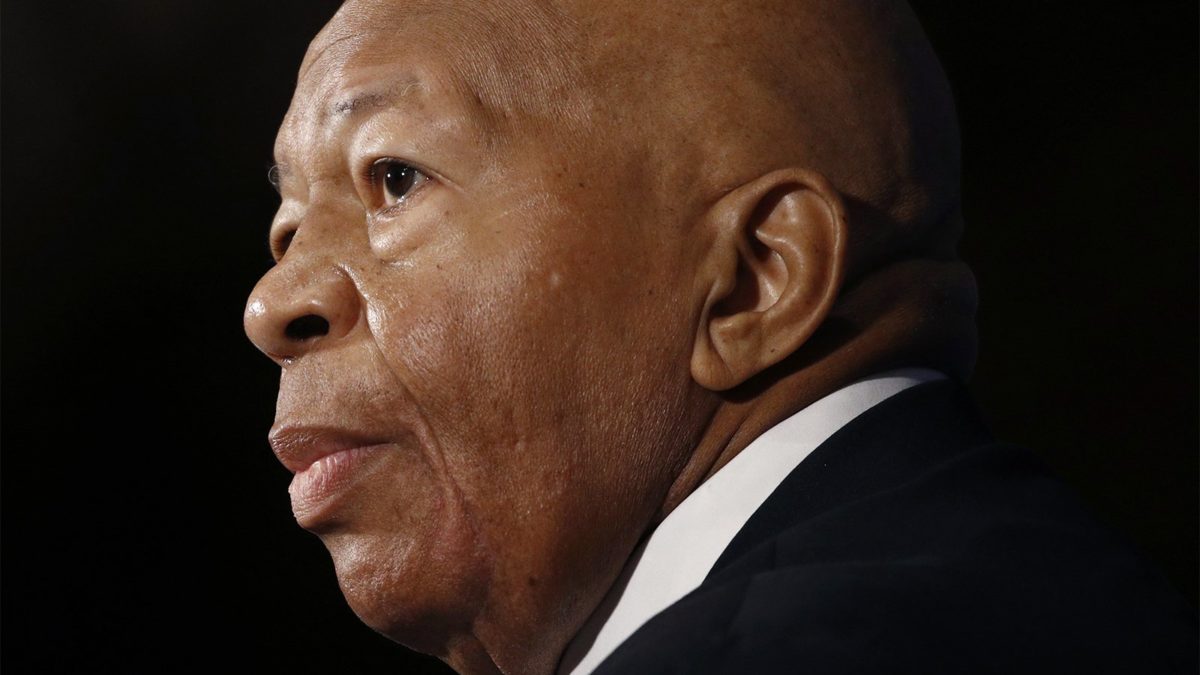 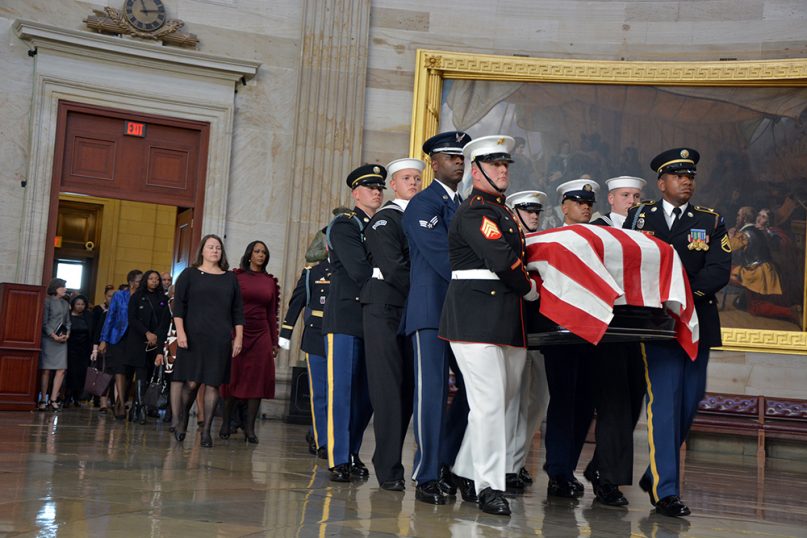 The casket of Elijah Cummings arrives at the U.S. Capitol to lie in state on Thursday, Oct. 24, 2019, in Washington. Cummings became the first African American congressman to lie in state. RNS photo by Jack Jenkins

(RNS) — After news broke last week (Oct. 17) that Maryland Democratic Congressman Elijah Cummings had died, many were quick to note that one of the last things the longstanding critic of the Trump administration — and key figure in an ongoing impeachment inquiry — did in his hospital bed was sign subpoenas.

But when Bishop Walter Thomas stood before the hundreds of churchgoers and dignitaries who packed the pews of New Psalmist Baptist Church in Baltimore, Maryland, on Friday (Oct. 25) for Cummings’ funeral, he insisted the legislator’s “last official act of the Kingdom of God” was something else.

“His last act takes place today, when men and women from every aspect of life, from those who run corporations, those who stand in hallowed halls, those who sit with robes behind benches, those who pass legislation … have all made their way to the place he came every Sunday morning,” said Thomas, speaking from the pulpit of a church Cummings attended for nearly 40 years. “His last act … is that he wanted you to know why he came to church.” 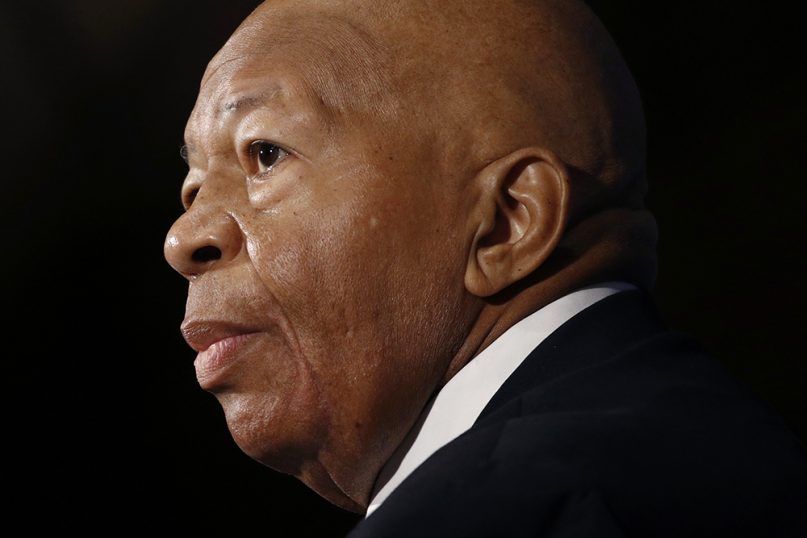 In this Aug. 7, 2019, photo, Rep. Elijah Cummings, D-Md., speaks during a luncheon at the National Press Club in Washington. U.S. Rep. Cummings died from complications of longtime health challenges, his office said in a statement on Oct. 17, 2019. (AP Photo/Patrick Semansky)

He added: “Elijah has brought power to church … Every place of power, Elijah has called them in.”

The powerful were, in fact, well represented at the funeral, including Democratic presidential candidate Sen. Elizabeth Warren of Massachusetts, who read scripture, and former Secretary of State Hillary Clinton.

During his sermon, Thomas also recalled his first meeting with Cummings, the son of sharecroppers who became pentecostal preachers, and pointed out different places where Cummings and his wife sat in the church over the years. 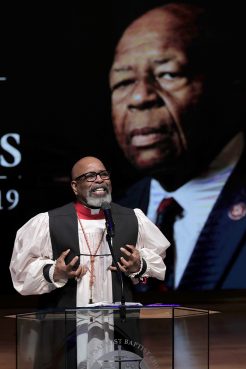 The congressman’s regular church attendance, Thomas argued, helped give him the spiritual inspiration to continue his work as a legislator — an inspiration he hoped would extend to the nation.

“Elijah would say, ‘As long as God gives me strength, I’m going to go back and fight another day,’” Thomas said. “Never fighting with despair, never fighting with pessimism, (but) fighting with the one weapon Jesus Christ made sure he had … an unshakable faith, a faith that God did not bring me this far to leave me now — that God didn’t bring our nation (this far) to leave us now."

Thomas was one of many who recounted the steadfast Christian faith of Cummings in the wake of his death, with everyone from clergy to congressional staffers to presidents remarking on how important religious devotion was to the crusading lawmaker.

Secretary Clinton referred to Cummings as “a man of faith and a man of the church,” arguing his life echoed his biblical namesake.

“It is no coincidence that Elijah shared a name with an Old Testament prophet, whose name meant in Hebrew ‘the Lord is my God,’” she said. “He weathered storms and earthquakes but never lost his faith.”

She then uttered a theological zinger that appeared to be a veiled reference to Donald Trump’s administration, of which Cummings was known to be a persistent gadfly.

“Like that Old Testament prophet, he stood against the corrupt leadership of King Ahab and Queen Jezebel,” Clinton said, sparking raucous applause throughout the church.

“He really did sort of mirror Isaiah who had one of the greatest one-liners in human affairs,” President Clinton said. “When the Lord asked, ‘Who shall I send and who will go for me?’ Isaiah said, ‘Here I am, Lord. Send me.’ Elijah Cummings spent an entire lifetime saying, ‘send me.’”

President Clinton, too, recounted the biblical story of Elijah, recalling when God spoke to the prophet in a “still small voice.” Elijah Cummings, he said, could also be such a voice for others.

“We should hear him now, in the quiet times at night and in the morning,” he said. “When we need courage. … Let our Elijah, be for us, what he himself heard: the still small voice that keeps us going, keeps us grateful, keeps us happy, and keeps us moving.” 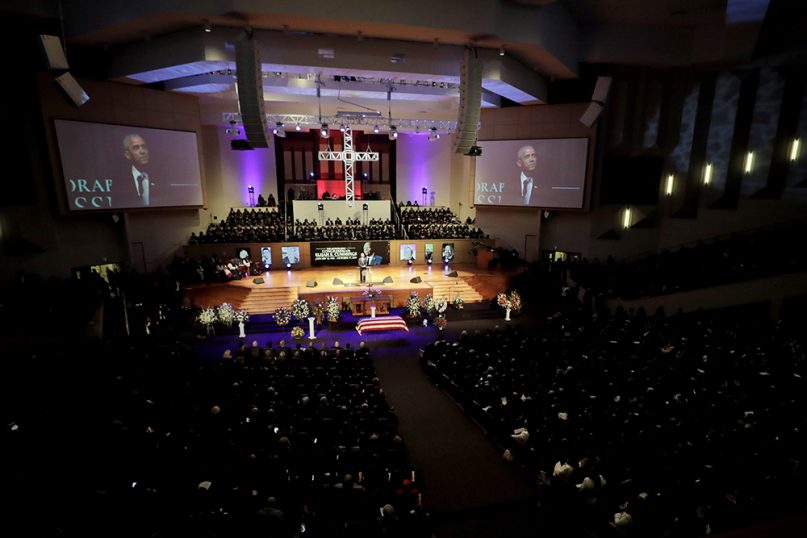 Former President Barack Obama spoke next, rooting his remarks in yet another biblical tale.

“The Parable of the Sower tells us to stand up for those with a noble and good heart, who hear the word, retain it, and by preserving, produce a crop,” he said. “Elijah Cummings came from good soil. And in this sturdy frame, goodness took root.”

Their words were echoed by others such as Maya Rockeymoore Cummings, the congressman’s wife, who described her husband as a man who “lived for God” and “is of God.”

Harry Spikes, one of Cummings’ congressional staffers, noted that the lawmaker often lived in pain but that “when it was time to address his audience, the congressman transformed into a spiritual warrior.

“It was as if he had received the cure to his pain,” Spikes said. “No armor. No shield. But God’s weapon of unconditional love for people.”

The funeral came after two days of remembrance services in Baltimore and at the U.S. Capitol, where Cummings became the first African American congressman to lie in state.

Speaking at the U.S. Capitol on Thursday, House Majority Leader Rep. Steny Hoyer (D-M.D.) also said Cummings was “like the biblical prophet Elijah,” who saw wronging and worked "to banish it from our land.” Cummings, he said, was “a man whose name meant ‘Lord is my God,’ who kept faith with God by keeping faith with his fellow men and women.”

Speakers invoked the spiritual on Wednesday as well, when Cummings was lying in repose at Morgan State University in Baltimore — where he served on the Board of Regents for 19 years.

Marc Terrill, president of the Associated Jewish Federation of Baltimore, lifted up the Jewish concept of a tzadik during services at the school. He defined the term as a person who stands for inclusion, evokes compassion and serves selflessly.

“If ever there was a tzadik, that tzadik was Elijah Cummings,” he said.