(RNS) — Yesterday marked the end of the first full month in decades in which the U.S. resettled zero refugees. How did this happen? At the beginning of October, the State Department unveiled the new cap for refugees in fiscal year 2020: 18,000. It’s a shockingly — and shamefully — low number, and it has not yet even been signed and put into motion to keep resettlement moving. This lapse and this number are at complete odds with the United States’ character and our historic record.

Recently released data from Pew Research Center shows how the number of admitted refugees has varied over the past several decades. In the 1990s, amid economic and political optimism, admittances soared, with an average of 116,000 refugees entering the country from 1990 to 1995.

Unsurprisingly, the attacks of 9/11 caused the number to decrease significantly, but President George W. Bush continued to set the cap at 70,000 or more each year of his administration. President Obama continued at this level before responding to a global refugee crisis in the last months of his presidency by raising the cap to 110,000 for the federal government’s fiscal year 2017.

Since that time, however, the number has fallen to historic lows. After taking office in 2017, President Trump put a freeze on new admittances and reduced the ceiling mid-year, such that far fewer than anticipated — around 53,700 — were admitted to the country. The following fiscal year, the cap was set at 45,000, and this past year, it was set at a mere 30,000.

Defenders of the administration’s policy usually cite economic or security concerns, worrying that admitting a large number of refugees will take jobs from Americans or threaten their safety. 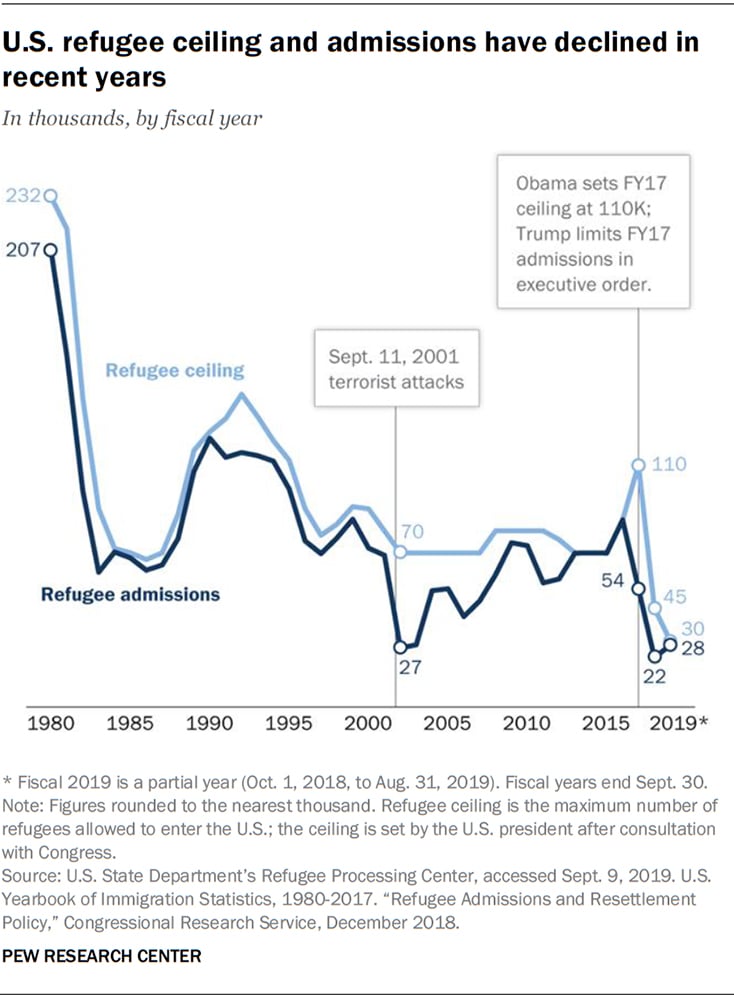 The truth is that Americans are far more likely to die in a car crash (1 in 8,096 in a year) or be struck by lightning (1 in 700,000 in a year) than die in a terrorist attack led by a refugee (1 in 3.86 billion per year). Fear of these strangers says far more about Americans’ mindsets than they do about the people on whom they’re centered.

The economic concerns don’t make much sense either. To put the numbers in perspective: The current cap — 30,000 — is about the size of the University of Kentucky. The proposed cap — 18,000 — is less than the size of Boston University’s undergraduate enrollment. Even the highest cap proposed in recent years — 110,000 — is only a little bit bigger than the number of people that can fit into the University of Michigan’s football stadium. We’d have to admit hundreds of thousands more refugees before they began to pose any threat to U.S. jobs.

If anything, admitting more refugees increases our economic stability. As other refugee advocates have observed, we’re currently looking at a labor market with more jobs than people to fill them. And refugees also help grow the overall economy as they become consumers and taxpayers. Employers need the hard work ethic and dedication refugees bring to the table to make the most of our current economic boom.

For most Americans, the most immediate result of denying entry to refugees is to leave the benefits of immigration to other countries, who are outstripping us as the land of opportunity. In 2018, Canada admitted the highest number of refugees in the world, resettling 756 refugees for every million of its own residents. Australia and Sweden followed, at 510 and 493 refugees per million residents, respectively. The U.S. trailed behind with a mere 70 refugees per million residents. “U.S. trailed rest of world in refugee resettlement in 2017 and 2018 after leading it for decades” Graphic courtesy of Pew Research Center

Before 2017, the U.S. took in more refugees in a given year than all the other countries in the world.

For those people seeking shelter in the United States, of course, the collapse of our refugee cap has more dire consequences. Violent conflict across the Middle East, Southeast Asia and sub-Saharan Africa has led to the worst refugee crisis the world has seen since World War II. More than 70 million individuals are currently displaced, and experts predict that number will only grow in the coming years. We couldn’t have picked a worse time to roll back our national refugee resettlement program.

The irony is profound — and heartbreaking. We pride ourselves on being a nation of immigrants, welcoming anyone with the courage and will to make it here to join us in the unending work of forging a more perfect union. At the moment when the world needs American leadership the most, when greater numbers of courageous, driven individuals than ever yearn to live in freedom, we renege on our nation’s promise and reject the talent and drive languishing in refugee camps across the world.

We strongly urge the administration to restore our commitment to refugee protection. Not doing so goes against our history, our character and the convictions of faith communities across the country. It belies the prosperity of recent years, creating a false sense of fear and scarcity in a season of abundance. Above all, it compromises our moral authority on the international stage.

America is better than this. We are a big, broad country, with room to spare for the tired, the poor and the huddled masses yearning to breathe free. Our prayer is that our leaders will reverse course, lighting a beacon of peace and freedom that will shine for generations to come.

(Scott Arbeiter is the president of World Relief, one of the nine refugee resettlement agencies. The views expressed in this commentary do not necessarily represent those of Religion News Service.)