CHESTNUT HILL, Mass. (RNS) — As Boston College finalizes the details of a potential Koch Foundation donation to its political science department, some students and faculty at the Jesuit-run institution are hoping to pressure university administrators into reconsidering the grant.

“It feels like a violation that we, as the student body, haven’t been taken into consideration,” said Carmen Chu, a sophomore political science major. “We don’t want our school accepting money from donors who are actively trying to control the political dialogue in the United States. … Especially because the Jesuit education so strongly emphasizes scientific inquiry and searching for truth and social justice, and the Koch brothers so obviously don’t align with that.”

At a rally on campus last week, organized by the student group Climate Justice at BC, Chu and other campus activists spoke to a gathering of 150 students, faculty and alumni, huddled in thick jackets while holding posters and candles.

“Are these our Jesuit values?” read one poster set up at the plaza outside the school’s O’Neill Library. Other signs accused the administration of accepting “dirty money” and urged officials to instead put the “planet over profit” by rejecting “climate denier dollars.” 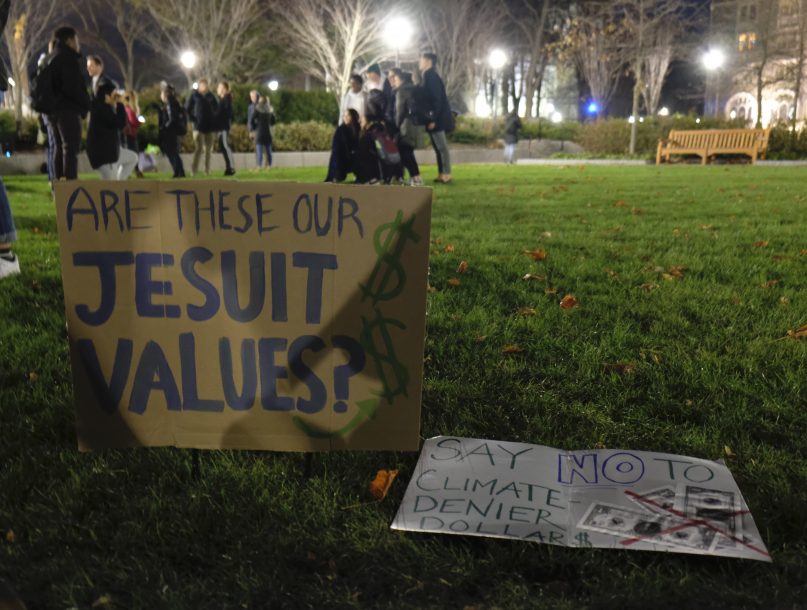 A poster at a rally outside the O’Neill Library at Boston College that was organized Nov. 14, 2019, by Climate Justice for Boston College and other campus groups against the administration’s acceptance of Koch Foundation funding. RNS photo by Aysha Khan

“As a Jesuit institution, we have a moral duty to put the common good above all else, and we believe the acceptance of this grant would legitimize the past, self-interested actions of the Koch Foundation,” a petition created by the Freedom Over Funding coalition reads.

The petition has been signed by more than 1,000 BC community members, including about 850 undergraduate students and six faculty members, organizers told Religion News Service. An informal group of professors from multiple departments, called Faculty for Justice, has also been meeting to discuss ways to halt the program proposal for the Koch funding. The liberal arts school, founded in 1863, has around 9,500 undergraduate students.

The coalition’s statement cites St. John Paul II’s 1990 apostolic constitution, which defines the mission of Catholic higher education institutions as “a continuous quest for truth through its research, and the preservation and communication of knowledge for the good of society.”

“Catholic universities are not meant to produce knowledge for its own sake; knowledge, and the means by which it is produced, must promote the common good,” the statement declares. “Historically, the Charles Koch Foundation has not used its donations to support the common good; it has used them to promote its own self-interested agenda.” 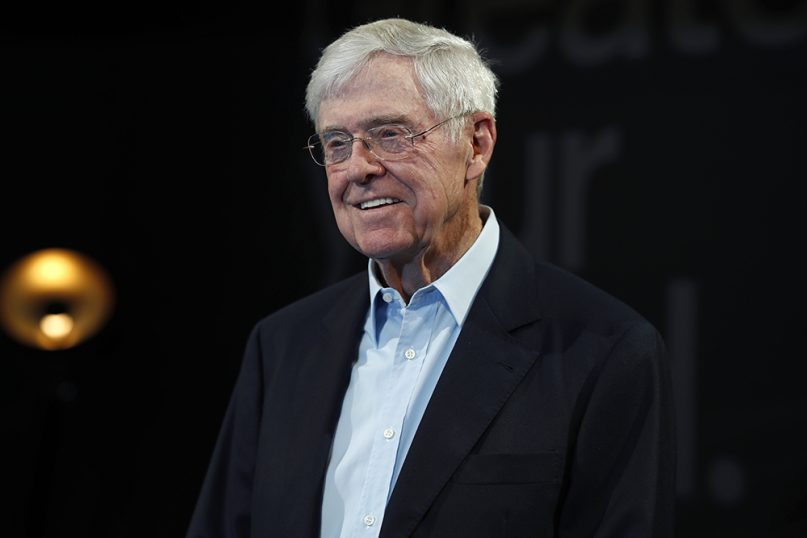 The Koch brothers were two of the world’s most controversial billionaires. When David Koch died in August, he and his brother Charles each had an estimated net worth of $58.7 billion, largely through profits from the massive oil refining and chemical conglomerate Koch Industries.

The libertarian duo became perhaps the most powerful funding force in conservative politics, bankrolling efforts to roll back environmental and business regulations, push Democratic lawmakers out of office and fund the small-government, free-market right. In particular, the Kochs have poured a fortune into the movement to question climate change science and policies.

Priya Lal, a Boston College professor who teaches African history, said the donation must be considered “in light of the Koch Foundation’s broader strategy of cultivating legitimacy and spreading a self-serving ideological agenda through grants to universities across the country.” 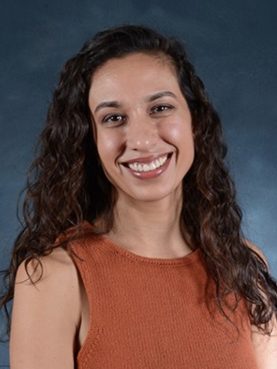 She pointed to the Koch brothers’ aggressive denial of manmade climate change, as well as the broader Koch network’s work to derail policies to combat global warming. She said the growing movement on U.S. campuses for cutting financial ties with fossil fuel companies can be compared to the international anti-apartheid divestment campaigns of the 1970s and ’80s.

“As a historian of Africa … I’m particularly committed to this new divestment movement and think it has all the ethical force of its earlier counterpart,” she added. “Like apartheid, climate change is a life and death issue.”

Even as they transformed the American political system, the Kochs have also made a major name for themselves as philanthropists. The family has donated hundreds of millions of dollars to cultural and educational institutions around the country. The Koch Foundation has funded around 350 universities across the country, including some of the nation’s most elite research institutions. Just north of the Charles River, the Massachusetts Institute of Technology and Harvard have both accepted millions from the billionaire industrialists.

Since 2015, Boston College has already accepted $15,000 from the Charles Koch Foundation, largely for fellowships for graduate students in political science. But the new donation would be a recurring one, according to early drafts obtained by student media, set to be reinstated every five years.

The funding proposal, which has not yet been submitted to the Koch Foundation, did not include a budget for the program or indicate exactly how much is being requested.

“Faculty advocates view the proposal as a means of funding an important research topic,” Jack Dunn, a university spokesman, told RNS. “They have confirmed with colleagues at Notre Dame, Georgetown and MIT — all of which receive Koch funding — that the foundation has not infringed on their research or academic integrity in any way. Exploring a source of funding should not be construed as an endorsement of the politics of the Koch brothers.” 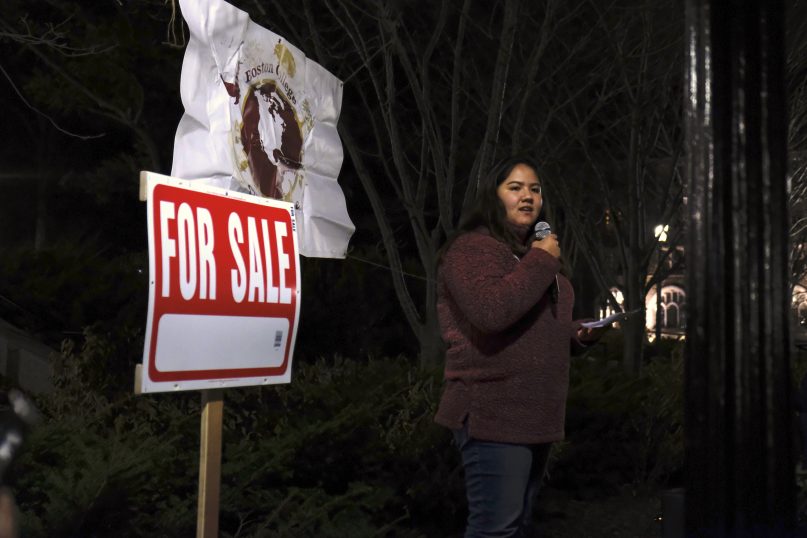 Audrey Kang, a Boston College student and member of Climate Justice for Boston College, speaks to protesters outside the O’Neill Library on Nov. 14, 2019. RNS photo by Aysha Khan

But anti-Koch activists say donations can come with strings attached. On campuses, they allege, it can inhibit academic freedom by interfering with school programming and even censoring faculty.

Even faculty within the political science department are now considering creating an advisory board to oversee the potential program and help fend off concerns over losing academic freedom, according to The Heights.

Documents released last year showed that George Mason University, the biggest university beneficiary of Koch funding in recent years, granted the Koch Foundation input in the hiring and firing of professors in exchange for millions of dollars in donations. A similar scandal erupted at Florida State University, which accepted a $1.5 million donation that funded two new faculty positions teaching “political economy and free enterprise.” The new hires would be selected by an advisory board that includes a Koch representative.

A former Arizona State University professor has alleged that that school’s acceptance of Koch funding led to “ideological indoctrination” of students and hiring of faculty “more for their right-wing commitments than academic stature.” And student reporters at Utah State University found that a $25 million Koch donation to their school was part of an “effort to inject universities with conservative thinking.” 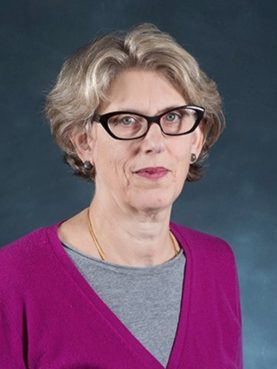 “They have a strategy for infiltrating universities and transforming them into places that promote the kind of anti-social and ‘eco-cidal’ ideologies they believe in,” said Juliet Schor, a Boston College sociology professor who is part of the Faculty for Justice group. “Now as they move into more elite institutions they’re less able to have control over the money. They’ve had to amend their contracts so they can’t have direct control over hiring. But that doesn’t mean their strategy of infiltration is over.”

Schor said the university should be alarmed by the Kochs’ work at the center of the climate change denial movement; the family’s alleged association with white supremacist groups and anti-civil rights efforts; and their businesses’ criminal violations, which have resulted in record civil and criminal environmental penalties.

“I think we’ve seen with Jeffrey Epstein and MBS (Mohammed bin Salman, the Saudi crown prince) recently the kinds of reputational damage that can happen to universities when they take money from criminals,” she said, pointing to recent controversies at MIT and Harvard. “They have bought their way into quote-unquote legitimate circles and people say they’re now legitimate political actors. Everything they stand for is opposed to the Boston College mission.”

Most donors to the college give to the school because they believe in its mission, she said.

“The Kochs give because they have their own mission, and they’re trying to transform us,” she said. “And I think their mission is — well, problematic doesn’t do it. In a religious context, we might call it evil. It’s deeply anti-human.”

Not all on campus take issue with the source of the donation. In two department-wide votes, political science faculty voted to work with the foundation and to approve the program proposal. An editorial published by The Heights, the school’s independent newspaper, last month came out in favor of accepting the funds, too.

“One of the unfortunate realities of being a major university is the questionable character of some donors,” the editorial noted. “BC can maintain its integrity and continue to uphold its Jesuit values so long as it can be sure that the money will be spent in the pursuit of a just world.”

But at Jesuit universities across the country, students and faculty are challenging their institutions’ acceptance of Koch Foundation donations. 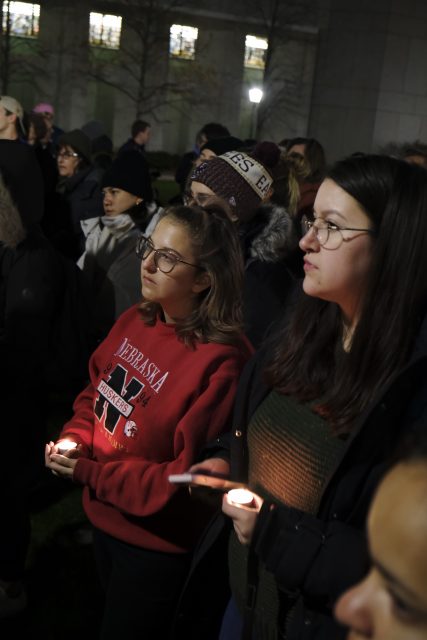 Students participate in a rally outside the O’Neill Library at Boston College organized Nov. 14, 2019, by Climate Justice for Boston College and other campus groups against the administration’s acceptance of Koch Foundation funding. RNS photo by Aysha Khan

Students and faculty at Boston College, Saint Louis University and Santa Clara University have all connected with the national nonprofit UnKoch My Campus to push their schools to reject Koch money. “Students, faculty and community stakeholders across the United States are activating against undue donor influence,” said Jasmine Banks, executive director of UnKoch My Campus. “They know that higher education is experiencing infiltration from donors who seek to leverage their institutions for private and corporate interests.”

Last month in California, students and faculty at Santa Clara University led a demonstration outside of the school president’s inauguration, arguing that the institution should reject Koch Foundation funding, divest fossil fuels and allow its faculty to unionize. Over a thousand students signed a letter urging the school to turn down a $4 million gift from the Koch Foundation, and the Faculty Senate Council voted overwhelmingly in favor of a resolution calling on the administration to refuse the money.

The group is also working with students at the College of the Holy Cross and Catholic University of America, whose business school has received millions in Koch funds.

“When you’re accepting money from any source, it’s something Catholic schools need to think about, whether it fits within the values of the university and of the church,” he said. “The really radical libertarian positions the Koch brothers have taken raise a number of issues. The economic ideology is dramatically different from the traditional teachings of the church as to how the economy should operate, and the concept.”

A few years before he retired in 2017, Schneck organized a campus conference on the incompatibility of Catholic teachings and economic libertarianism. In the past several years the issue has gained more and more attention from Catholic thinkers in the U.S., he said.

“But what’s really interesting about what’s happening at Boston College is that it’s not just a couple of disgruntled academics that are raising questions and causing pushback,” Schneck said. “I don’t remember students being in the front lines of the reaction to these gifts before.

“Our students have a nose for hypocrisy, and when there’s a disjunction between these gifts and what the university is supposed to stand for, then I think it’s appropriate for students to stand up,” he added. 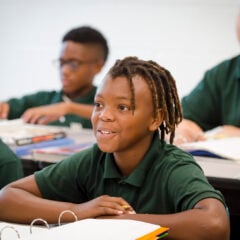