Editor’s Note: The speaker uses a racial epithet in his first answer.

KELLER, Texas (RNS) — When longtime reconciliation advocate John Perkins took the stage at a conference of multiethnic church leaders, they gave him a standing ovation and kept standing as he counseled them.

At almost 90, Perkins, a civil rights activist, advocate for the poor, and worker for inclusivity in evangelical churches, told hundreds of people attending the Mosaix conference in early November that he’s “almost finished” with his work but there is more ahead for them.

In an interview the day before his brief address to the conference, Perkins said he’s planning the final book in a trilogy that will be the “centerpieces of my theology.” The first, “One Blood: Parting Words to the Church on Race and Love,” has been followed by the second, “He Calls Me Friend: The Healing Power of Friendship in a Lonely World.”

He talked to Religion News Service about the importance of friendship, overcoming hate with love and his hopes about heaven.

You are a veteran in the realm of race relations in church and society. What concerns you most about the current state of those relations? 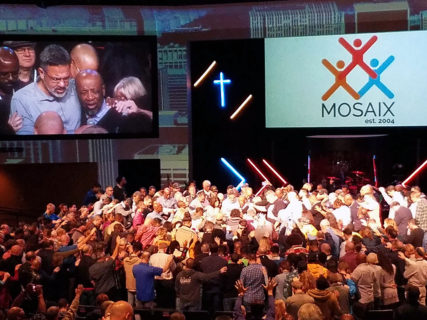 A large group prays around John Perkins during the Mosaix conference on Nov. 7, 2019, in Keller, Texas. RNS photo by Adelle M. Banks

I don’t think we’re developing authentic friendship. Our discipleship is not going there. I think our racial reconciliation continues to antagonize each other. I don’t meet many white folk who want to be a racist and we’re calling them a racist. I don’t think that’s affirming their dignity. I don’t think that’s receiving ’em. I don’t meet many black folk who want to be called a n—– again. That’s not affirming our dignity. So we haven’t found a language of accepting each other. We don’t have the language for the conversation. Even if we have the conversation, our language itself is already bad.

Integration and racial reconciliation is that space between when the first black moves in and the last white moves out. Now the whites are moving back and the blacks say, “We don’t want you in here with us and we want to stay like we were. Y’all taking our land.” We haven’t decided about getting together and loving each other. The church hasn’t made that decision.

In speaking to people attending Mosaix, a multiethnic church conference filled with people who are from the generations that follow yours, what advice do you have for clergy seeking to create or maintain churches that are inclusive of a variety of ethnic and racial groups? 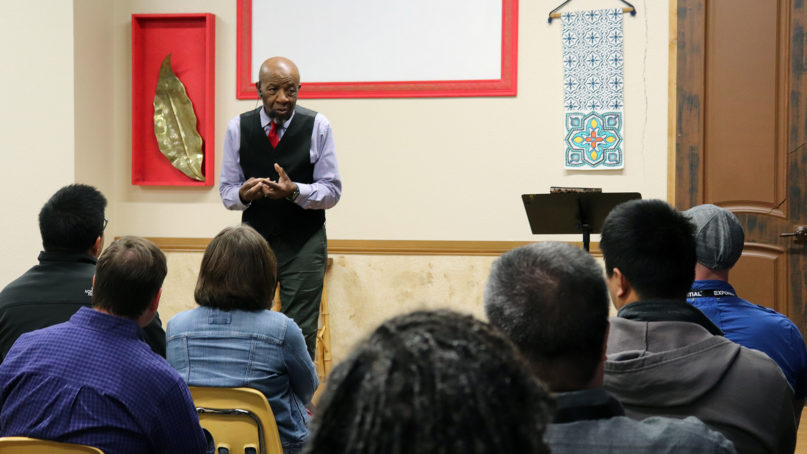 John Perkins speaks at a workshop during the Mosaix conference on Nov. 7, 2019, in Keller, Texas. RNS photo by Adelle M. Banks

Your mother died in poverty when you were still an infant —

— your brother was killed by a police officer, and you were jailed and beaten as you fought for civil rights. How did you move from what could have been a life of anger and hate to one that has focused so much on faith and love?

I didn’t find that liberation until I came to know Jesus Christ, until I realized that Christ had died for me and that God loved the little children, all the children of the world — red, brown and yellow, black and white — they’re all precious in his sight. I knew that before I was beaten in a jail but when I was beaten in the jail, I think something happened out of that beating that gave me determination to do this. I think after coming out of that jail, I found authentic love from blacks. I found authentic love from whites. I think blacks thought I wasn’t just a do-gooder, a token black, that I wanted to live for them. I think white folk came and washed my wounds. I think real reconciliation is washing each other’s wounds. 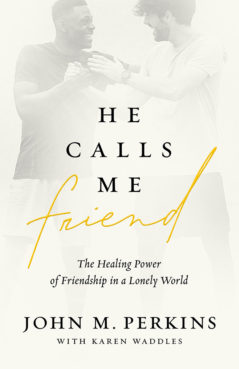 “He Calls Me Friend: The Healing Power of Friendship in a Lonely World.” Courtesy image

In your new book, “He Calls Me friend,” you say that friendship can help people overcome what you call “the sin sickness of ethnic hatred and prejudice.” Can you briefly explain what you mean by that?

I mean that friendship is the outliving of the good Samaritan story that said, you can get into the kingdom if you can be like that good Samaritan. That’s an oxymoron. That’s a complete change of behavior. Those Jews — and they were the religious Jews — they left that Jew there. This mixed-bred guy, this guy who saw beyond racism and color, he saw there was a human being and he affirmed, he invested in him and he invested in his future and he said, I’ll invest some more if I come back. He became a friend, and Jesus said, go and do likewise.

He called us to be friends. I’m changing my name. I’m telling you all to call me friend. My name is friend.

You and your wife of almost 70 years founded what is now called the John and Vera Mae Perkins Foundation in Jackson, Mississippi, in 1983. What was the goal?

The goal was to create (Christian Community Development Association) and to plant within it the biblical mandate. I would come every time we would meet in the morning and anchor people in the Word of God. This is our guidebook. This is our blueprint. And where I would take them would be into the incarnation, looking at the first purpose for which God came: They shall call his name Jesus for he shall save his people from their sin. They got a housing problem but they need to be saved too. Do you wait ’til they get saved to do that? No. If they’re poor, if they’re hungry, feed ’em. If they’re naked, clothe them. If they don’t have shelter, bring them to your house. You don’t wait until they’re saved to do that. Doing that might show somebody else our good work and (they may) say I want to be a part of that group.

You are turning 90 next year. It doesn’t appear, though, that you’ve really retired. What are your goals at this stage? 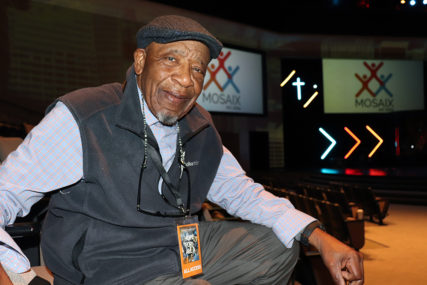 To finish my manifesto and I want to write one more book. I want to put these three together: “One Blood,” “He Called Me Friend” and the thought is why did James say count it all joy when you fall into suffering? I want to learn a little bit more about the vicariousness of suffering and the value of suffering, so I can get ready and get the people ready to die, to welcome his return, but also welcome death if it’s for a noble cause.

You mentioned in your new book that you yearn for heaven. How does that desire relate to your concept of friendship?

I think if we’re going to join our friends forever, we will never be separated again. I had a little theological trouble with it because (Jesus) said somebody in heaven, he won’t be married or given in marriage because I wanted to be in heaven, around the throne, I want to have Vera Mae’s hand.

So how do you deal with that?

Heaven will be so much greater.