LONDON (RNS) — Religion and politics don’t usually mix in the United Kingdom, with the British averse to faith leaders endorsing or opposing specific politicians at election time. But a Dec. 12 national election, ostensibly called to settle divisions over Brexit, has brought denunciations from the country’s top religious figures aimed at expunging discrimination based on faith, particularly anti-Semitism.

Last week Ephraim Mirvis, chief rabbi of the country’s Orthodox Jews, made an unprecedented intervention, condemning the Labour Party’s leader, Jeremy Corbyn, for his track record on anti-Semitism ahead of the Dec. 12 national election.

In an article in The Times, Mirvis wrote that the Jewish community was deeply anxious about the prospect of Corbyn’s election as prime minister, given a series of incidents which made them believe that he had failed to stand up against anti-Semitism, including within his own party, and his connections with people well-known for their antipathy to Jews and to Israel.

“How complicit in prejudice would a leader of Her Majesty’s Opposition (the official term for the largest party not in office) have to be to be considered unfit for office?” he asked.

While Mirvis did not attempt to dissuade anyone from voting for the Labour Party, he urged: “I ask every person to vote with their conscience. Be in no doubt, the very soul of our nation is at stake.” 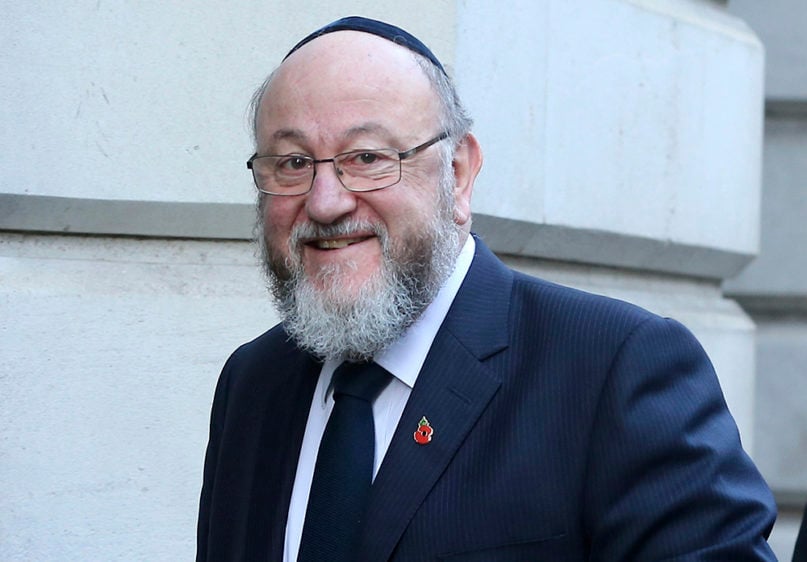 Chief rabbi Ephraim Mirvis at Downing Street en route to the Remembrance Sunday service at the Cenotaph in London on Nov. 9, 2019. Photo by KGC-254/STAR MAX/IPx 2019

The chief rabbi’s intervention reflects concern felt by many Jews regarding Corbyn’s record and the attitudes of some Labour Party members. According to one poll in September 2018, more than 85% of British Jews thought the party leader was anti-Semitic.

Other faith leaders have joined the chief rabbi’s statement. Hours after Mirvis’ comments, the Archbishop of Canterbury, Justin Welby, without referring explicitly to the Labour Party, posted on Twitter: “That the Chief Rabbi should be compelled to make such an unprecedented statement at this time ought to alert us to the deep sense of insecurity and fear felt by many British Jews. They should be able to live in accordance with their beliefs and freely express their culture and faith.”

Another well-known rabbi in Britain, Jonathan Romain, who belongs to the Reform Judaism tradition, has gone further than the chief rabbi, writing to all members of his community to vote for whoever is best placed to defeat Labour.

“Normally I would say nothing about party politics,” said Romain, “but on this occasion sadly normal considerations don’t apply.”

Rabbi Romain’s community is made up of about 820 households spread across a dozen parliamentary constituencies to the west of London and includes several constituencies where Labour candidates are defending their majorities.

“I expected a backlash from my own community,” he said, “but virtually everybody said it was time to take a stand. Some Labour supporters within the synagogue have also resigned from the party over anti-Semitism, and it has been a real wrench for them to leave.”

The row over anti-Semitism in the party has had consequences for the party already in this election. Two long-serving Jewish Labour M.P.s, Ian Austin and Dame Louise Ellmann, quit the party earlier this year and so are not defending Labour-held seats in this election.

Another Jewish former Labour M.P., Luciana Berger, who quit the party in February and is now a Liberal Democrat candidate, has said that during her last meeting with Corbyn she had mentioned that Facebook group posts were littered with anti-Semitic posts, all citing the Labour leader’s name and photo. In a post on Twitter on Nov. 25, she wrote: “Nothing was done about it following our meeting.

“The party says ‘that no one who engages in it (anti-Semitism) does so in his (Jeremy Corbyn’s) name,'” she continued. “But that is exactly what has happened.” Berger is running to represent Finchley and Golder’s Green, a London seat with, according to the Institute for Jewish Policy Research, the most Jews in the 2015 election, with 25,400, or 10%, of the country’s Jewish population.

In the adjoining seat of Hendon, there are 21,000 Jewish votes. Labour came second there in 2017 with 1,072 votes, but few think, with the anti-Semitism row, that it will win it now.

Labour strategists are worrying that the anti-Semitism row is affecting wider support, given that Labour has always presented itself as a party strong on opposing racism. Corbyn hasn’t helped his case by ducking repeated opportunities to apologize for anti-Semitism during a high-profile television interview. Footage of an 86-year-old voter being interviewed by a TV reporter shows her saying, “I won’t vote for the red man who doesn’t like Jews.”

The current round of denunciations arrive as a reckoning on an issue that has been troubling British society for years. Welby’s intervention came just days after the Church of England published a 100-page report into anti-Semitism and is the first time that it has formally recognized the part the Church has played in promoting prejudice against Jews. Work on the report first began three years ago, and releasing it during the election campaign has been taken as a sign of how significant it considers the recent resurgence of anti-Semitism.

In the forward to the report, “God’s Unfailing Word: Theological and Practical Perspectives on Christian-Jewish Relations,” Archbishop Welby writes: “The fact that anti-Semitic language and attacks are on the rise across the UK and Europe means we cannot be complacent.”

Meanwhile the Muslim Council of Britain said that Muslims should follow the chief rabbi’s call to vote with their consciences — which in their case would mean not voting Conservative, in part due to Conservative Prime Minister Boris Johnson’s habit of fanning the flames of anti-Muslim prejudice. In the past Johnson has called women in burkhas “letter boxes” and “bank robbers.”

On Wednesday (Nov. 28), Johnson apologized for Islamophobia in his party and said a previously announced inquiry into all manner of prejudice and discrimination in his party would continue.

The Liberal Democrats — the third party in British politics — hasn’t avoided religious controversy of its own, in their case over Roman Catholic beliefs. Just 36 hours after adopting him as a candidate for the Midlands seat of Stoke on Trent, the Liberal Democrats ditched Robert Flello, a Roman Catholic, on the grounds that his values were not the same as the party’s.

Flello’s voting record as a Labour M.P. for the same seat, which he lost two years ago, showed his opposition to same-sex marriage and abortion. The Liberal Democrats said that the party did its best to screen candidates, but it later became clear “how greatly his values diverge from ours.”

Flello said, “I am profoundly concerned that people of faith who adhere to their religious beliefs are not welcome in their party.”

Flello’s dismissal indicates how faith and ethics have become a dividing line in the election. Traditionally, issues like abortion and other matters of personal morality have been treated as matters of individual conscience in British politics, with MPs not expected to toe a party line.

But this may change, given that Labour has made abortion a manifesto issue in this election. Its commitment says, “we will uphold women’s reproductive rights and decriminalize abortions,” effectively dismantling restrictions on abortion such as time limits. Abortion is allowed in the UK up to 24 weeks of birth, which is already around twice the average time limit on abortions in Europe.

Labour has suggested that it would scrap the existing 1967 Abortion Act, which currently requires two doctors to agree that continuing with the pregnancy would constitute a significant risk to a mother’s physical or mental well-being.