(RNS) — As Washington ramps up pressure on Beijing to end its extrajudicial mass detention of up to 3 million Uighur Muslims, Chinese officials are accusing the U.S. of hypocrisy over its own record of anti-Muslim discrimination.

“Muslims have all along been the most discriminated group in the U.S.,” Chinese Foreign Ministry spokeswoman Hua Chunying said during a news conference this week. Hua’s comments were a response to calls from U.S. lawmakers and officials for the country to close its extensive network of Uighur detention camps.

“It can no longer be denied that more than one million Uighurs and members of other minority groups have been detained in Xinjiang against their will,” Branstad said Tuesday (Dec. 10). “It is also evident that these egregious actions, including extensive security controls and surveillance, forced labor, blanket suppression of religious expression, and even the mass collection of DNA, are targeting Uighurs’ ethnic and religious identities.”

Both chambers of Congress have overwhelmingly passed versions of a bipartisan bill ordering sanctions on Chinese officials over the country’s treatment of its Muslim minority. Secretary of State Mike Pompeo has repeatedly demanded China close its camps, called on other countries to reject China’s demands to repatriate Uighurs back to China, and denounced China’s efforts to intimidate and threaten U.S. citizens and residents.

“Certain people in the U.S. show unusual concern over Uighurs in China’s Xinjiang, but they seem to forget that the United States is the only country that issued a Muslim ban,” she said.

“China should stop making excuses for (and) covering up its Muslim concentration camps,” the Council on American-Islamic Relations said in a statement after China’s news conference. During her news conference Hua had cited a 2018 CAIR report finding that federal agencies instigated 35% of all anti-Muslim bias incidents documented in the previous year. In this Dec. 3, 2018, file photo, a guard tower and barbed-wire fences are seen around a facility in the Kunshan Industrial Park in Artux in western China’s Xinjiang region. The U.S. considers facilities like this to be detention camps for Uighur Muslims. China responded with swift condemnation on Dec. 4, 2019, after the U.S. Congress overwhelmingly approved a bill targeting its mass crackdown on ethnic Muslim minorities. (AP Photo/Ng Han Guan, File)

CAIR argued that anti-Muslim acts by individuals in the U.S. cannot be compared to “concentration camps” operated by the Chinese state and that Hua’s statement was “a way of detracting from (China’s) own crimes and authoritarian practices.”

“It is an egregious and callous claim to suggest that the challenges facing Muslims in the US in any way, shape, or form can compare to the well documented human rights abuses and genocidal policies faced by Uighur communities at the hands of the Chinese state,” said CAIR’s research and advocacy director, Abbas Barzegar.

Uighur rights groups in the U.S. told Religion News Service that the plight of their community — an ethnically Turkic and largely Muslim population in western China and parts of Central Asia — is not about Islam.

Instead, the Washington-based group East Turkistan Government-in-Exile called China’s repression of Uighurs “an issue about colonialism in the 21st century.” The group claims the conflict between China and Uighurs dates back to China’s 1949 invasion, occupation and renaming of the region Uighurs call East Turkistan.

Hudayar said the government is targeting all religious faiths, not just Islam.

“It doesn’t matter if you are Muslim, Christian, Buddhist or practitioner of other faith, in East Turkistan believing in any higher being other than the Chinese Communist Party is a reason for one to get sent to a ‘reeducation’ concentration camp,” Hudayar said. 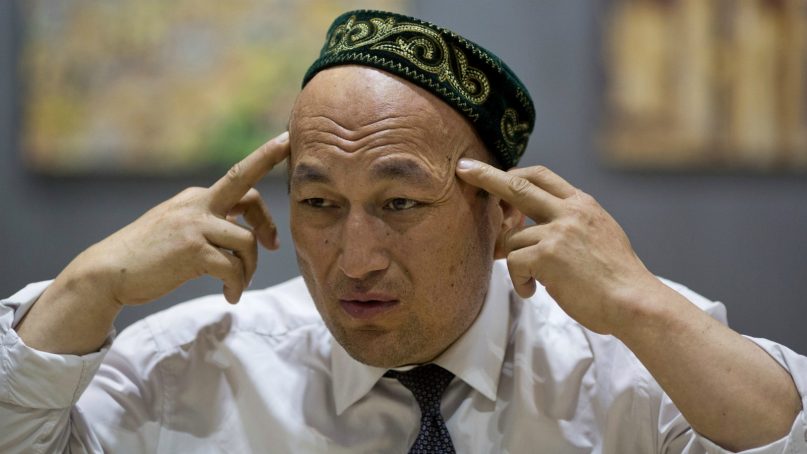 In this photo taken March 29, 2018, Omir Bekali talks about the psychological stress he endured in a Chinese internment camp during an interview in Almaty, Kazakhstan. Since 2016, Chinese authorities in the heavily Muslim region of Xinjiang have carried out a campaign of mass detentions and indoctrination in internment camps, with the stated aim of bolstering national security and eliminating Islamic extremism. The program appears to be an attempt to rewire its detainees’ political thinking, erase their Islamic beliefs and reshape their very identities. (AP Photo/Ng Han Guan)

Beijing has accused the minority of supporting Islamist terrorism and claimed that, since the mass detention system took off three years ago, the Xinjiang region has been free of violence.

U.S. officials have called the centers “concentration camps” with communist and anti-Muslim brainwashing, arguing that China has installed a surveillance regime to clamp down on religious liberty and effectively erase the ethnic and cultural identities of Uighurs.

In an op-ed this week, China’s ambassador to Thailand argued that the U.S. showed hypocrisy by saying China cannot crack down on a domestic terrorist threat.

“The bill smears China’s efforts in counter-terrorism and de-radicalization, which only reveals America’s double standards on counter-terrorism and further exposes to the Chinese people its hypocrisy and malicious intentions,” Lyu Jian said, echoing Beijing officials’ condemnation of the Uyghur Human Rights Policy Act of 2019.

Leaked cables show that Xi, China’s president, has looked to America as a role model in his country’s clampdown on Uighurs, urging his party to mirror elements of the United States’ counterterrorism efforts post-9/11. Xi encouraged use of neighborhood informants and said that China “must make the public an important resource in protecting national security.” 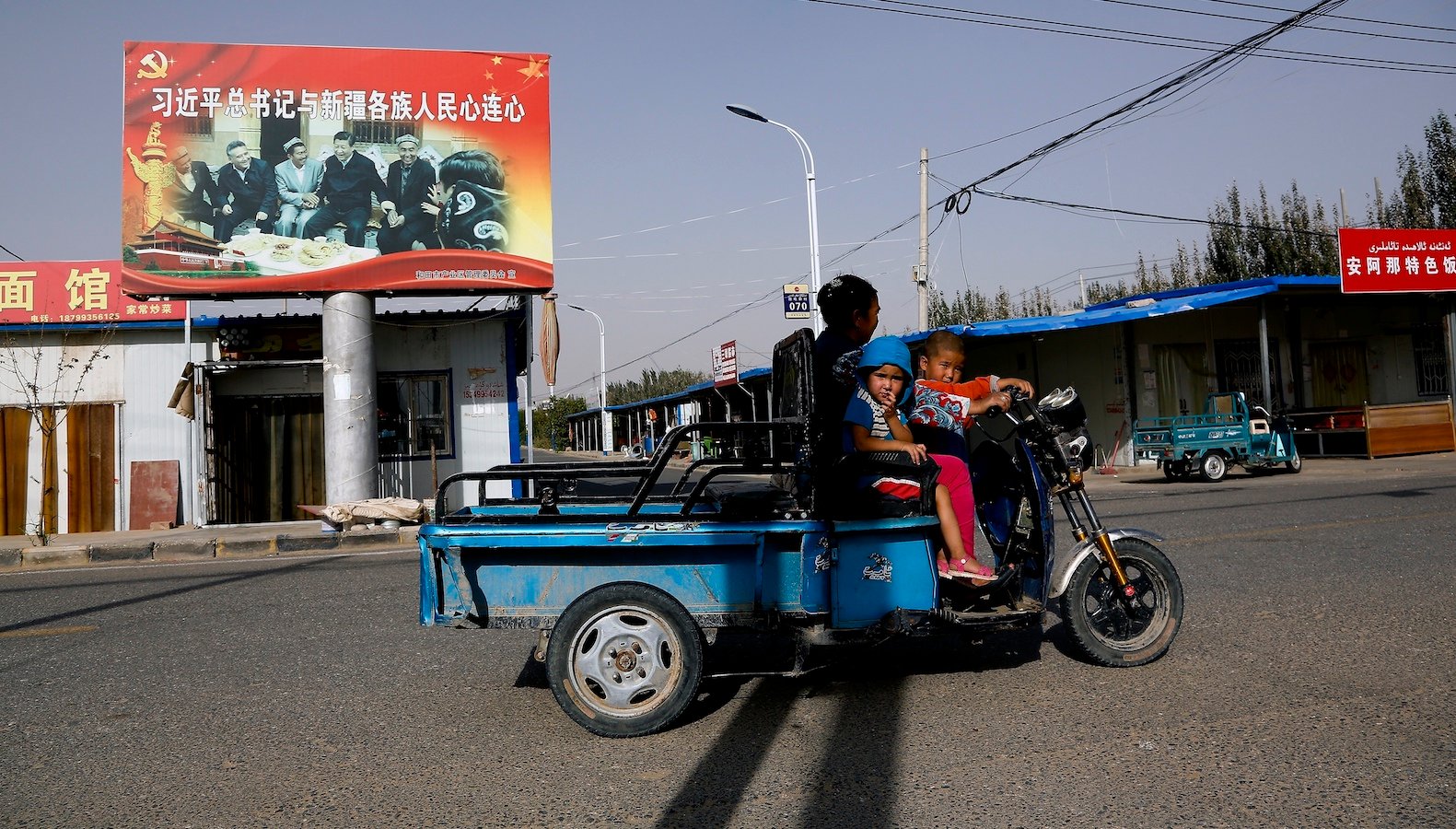 In this Sept. 20, 2018, file photo, a Uighur woman shuttles schoolchildren on an electric scooter as they ride past a propaganda poster showing Chinese President Xi Jinping joining hands with a group of Uighur elders in Hotan, in western China’s Xinjiang region. Under Xi, the Uighur homeland has been blanketed with stifling surveillance, from armed checkpoints on street corners to facial-recognition-equipped CCTV cameras steadily surveying passers-by. Now, Uighurs say, they must live under the watchful eye of the ruling Communist Party even inside their own homes. (AP Photo/Andy Wong, File)

This line of defense from China is not new.

Last year, a pro-government newspaper wrote: “ … (T)he West itself should be consistent over its own value system. How can it be fine to kill terrorists with missiles and drones, but a humanitarian crisis when China attempts to turn them into normal people?”