VATICAN CITY (RNS) — Held together by engaging writing and artful acting, the movie “The Two Popes” offers an intimate look at the relationship between Pope Francis and Benedict XVI, delivering a powerful message about dialogue and mercy along the way.

“In the end, the film talks about how dialogue is possible, and this is not only for the Church, it’s really for the world,” said Director Fernando Meirelles in an interview with Religion News Service on Thursday (Dec. 11), adding that “we are in a moment in history where the world is very polarized.”

The two popes “can disagree, but they can have a conversation,” he continued, and “I think it’s a nice, beautiful message not only about the Church.”

The film, while not a perfectly accurate representation of life inside the Vatican, nevertheless manages to get a great deal right. Even those who are well acquainted with the inner workings of the Vatican and the curia — which the film aptly describes as a “meat grinder” — cannot resist being drawn in by the familiar places and situations. Overall, writer Anthony McCarten clearly did his homework.

The pretext of the film is pure fiction and serves as a narrative ploy. Cardinal Jorge Bergoglio, who in the movie is played with uncanny accuracy by Jonathan Pryce (“Brazil,” “Carrington”), never visited Pope Benedict XVI, interpreted by Oscar winner Anthony Hopkins (“The Silence of the Lambs”), in the pope’s summer estate in Castel Gandolfo. Nor did Bergoglio hand in his resignation just as Benedict contemplated whether to announce his own in a nearly unprecedented move that shaped the trajectory of the Catholic Church amid historic scandals and a shifting global political climate. 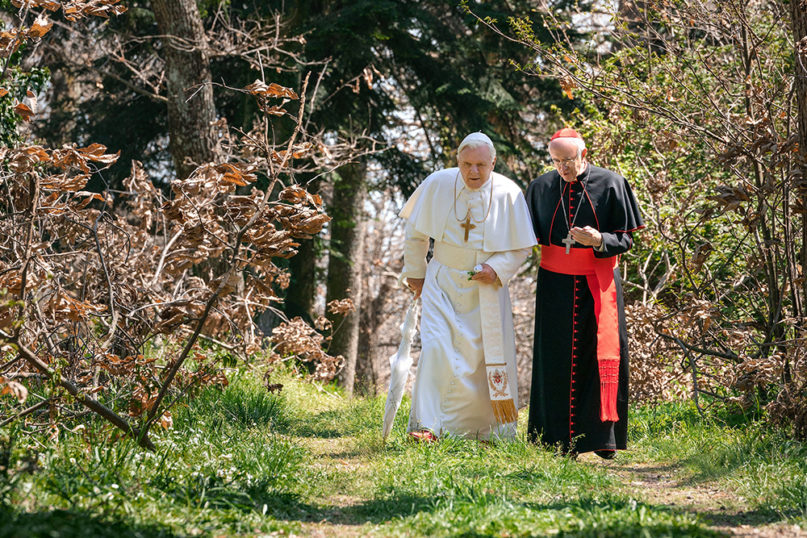 Jonathan Pryce as Cardinal Bergoglio, right, and Anthony Hopkins as Pope Benedict in a scene from “The Two Popes.” Photo by Peter Mountain/Netflix

But focusing on historical accuracy while watching Netflix’s “The Two Popes” would be a mistake. Structured in the manner of the Catholic sacrament of confession, the film portrays the perceived representatives of two very different and opposing views on the Church engaging in fruitful dialogue, then in understanding and finally in forgiveness.

“It is a confessional,” Meirelles said, adding that “the film is about guilt.”

As the Catholic world today is split in conflicting camps, this movie serves as an appropriate reminder that there is still space for tolerance and understanding, a message that easily spills out of the religious realm and into today’s increasingly polarized society.

Conclaves, the ceremony during which popes are elected by the college of cardinals, provide the tempo of the feature, as the film brings the viewer inside the Sistine Chapel, where a campaigning Cardinal Joseph Ratzinger will emerge as Pope Benedict XVI.

The track “Dancing Queen,” by ABBA, provides a playful soundtrack to the momentous occasion. The lyrics, “You come to look for a king. Anybody could be that guy,” play in the background as the cardinals decide who will be their next leader.

Levity is instrumental in this dialogue-heavy script, which Meirelles said challenged him to create an “interesting, cinematic and watchable film.” To do this, the director said he filled the scenes with light, fun music and intimate acting.

As the movie progresses, we find Benedict struggling to keep a hold on the Vatican, as sexual and financial scandals hit the Church. While the challenges Catholicism faces to this day are mentioned in the film, they remain in the background, a smart move for a movie that benefits from focusing on the men rather than the institutions.

That’s when Bergoglio comes in, resignation note in hand, and the viewer is led through their growing relationship, which starts out with skepticism and distrust, only to end a few days later with friendship and a tango.

Both the protagonists are made somewhat into caricatures of ideas they represent, highlighting their opposing views and approaches. The movie forgets to mention that the financial and spiritual reforms currently underway at the Vatican were started and promoted by Benedict and that Francis himself has often said he is a conservative.

Benedict is portrayed as nearly blind and unable to “hear God’s voice” and seemingly numb to the outside world. Hopkins’ portrayal is highly physical, attempting to convey the frailty of the now retired pontiff as well as his witty and insightful mind. “At the keyboard, I am not infallible,” Benedict jokingly says while playing the piano.

Pryce doesn’t rely only on the striking similarity between his appearance and Francis’, but performs remarkably familiar imitations of the pope’s tilt of the head, intensity and double-chinned smile. 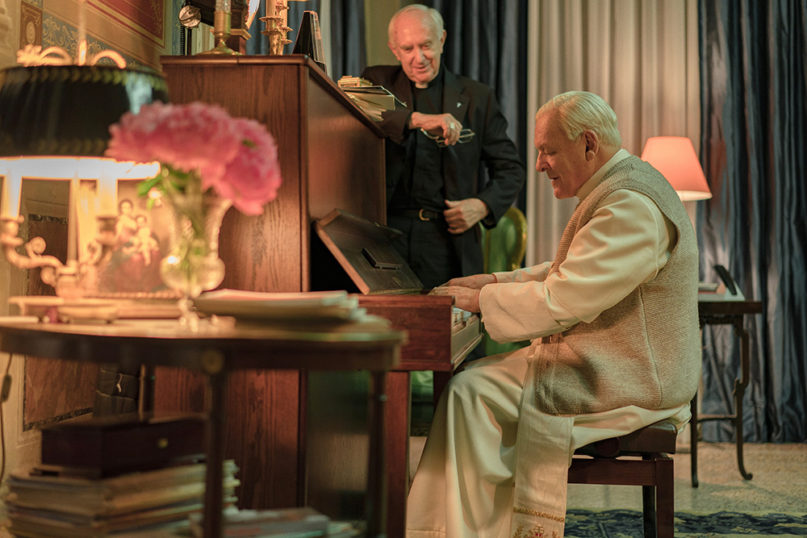 Jonathan Pryce as Cardinal Bergoglio, left, and Anthony Hopkins as Pope Benedict in a scene from “The Two Popes.” Photo by Peter Mountain/Netflix

Off the set, in real life, Pryce said he “keep(s) the beard, so people don’t ask me to bless them when I am on the street.” For the film though, he told RNS that he even went to Francis’ hairdresser.

The actor said he personally regards Francis as a political leader with shared ideals. But while filming in Argentina and being blessed by a Catholic priest, Pryce, who was raised Christian, admitted it was “an eye-opening experience to see the awe and respect that people have for the Church.”

The film takes us through Bergoglio’s difficult legacy when he headed the Jesuit order during Argentina’s Dirty War. The cardinal attempts to make amends for his sins by listening to confessions and feeding the poor. “I learned to listen,” Bergoglio says to the pope.

He relays his guilt to Benedict, who after absolving him goes on to confess his own sins. Bergoglio, renewed in his faith through atonement, comes to the pope “changed,” not compromised, and in turn is able to effect change in Benedict.

“Now I can see a necessity for Bergoglio,” Benedict says, sitting in the Sistine Chapel, condemning the common sin of “spiritual pride.”

The movie leads the viewer to the conclave that elects Pope Francis and his historic greeting to St. Peter’s square.

Catholic themes have been having a bit of a moment in popular culture, with numerous filmmakers, fashion designers and actors taking an interest in what is often considered a niche market. This is partly due to the popularity that Francis has inspired since his election in 2013, but Pryce suggested a different answer.

“We lack leadership, political leadership,” he said, referring to the populist wave taking over Western countries. “We are now looking for people who are free thinkers and more open minded about society to guide us through it.”

“And it happens that we have a very good leader in the Catholic Church,” Meirelles added.