(RNS) — One of the holiest days of the Christian year is right around the corner, and churches all over the world are gearing up for a spectacular celebration of the birth of Jesus. In America, as in many other places where Christmas has been appropriated by secular culture, even people who don’t care who Jesus was or what he taught will find themselves darkening the door of a church building this week.

They come yearning for all the things that Christmas promises: hope, peace, joy, love, the kind of healing that can come from actually living Jesus’ central teaching to love God and to love our neighbors.

And don’t we need it? Twelve years until climate change is irreversible. Children in cages. Men who hurt women making laws and holding the highest offices in the land. The five-year-old in your life practicing what she should do when a gunman breaks into her classroom and starts shooting.

One of my predecessors in the pulpit at The Riverside Church, founding pastor Harry Emerson Fosdick, once exclaimed, “It’s a great time to be alive! The world is falling apart!” Fosdick truly believed that if enough people were committed to following the teachings of the babe born in a manger, they could have a real, tangible impact in the lives of those he saw every day walking the streets.

And many people of faith are trying. In 2013, the archbishop of the Anglican Church, Justin Welby, launched what became known as the War on Wonga. Wonga, at the time, was one of the largest payday lending companies in Great Britain. Just as in the United States, payday lenders in the U.K. make money by preying on some of the most vulnerable — individuals who struggle to obtain credit and very often are unable to earn a living wage. As part of its War on Wonga, the Church of England opened a credit union to provide banking services, including lending, at reasonable rates. The church’s efforts were fairly successful, though they didn’t eliminate the problem altogether. Then, a few years into the experiment, the House of Parliament finally stepped in, passing legislation to cap the interest rates payday lenders could charge, effectively putting Wonga out of business.

In bankruptcy, Wonga held a loan book of 400 million pounds of unpaid debts that needed to be sold off. The purchaser of the loan book would assume responsibility for the loans Wonga still held. And right at this moment of victory for the Church of England, an enterprising MP in Parliament penned an open letter proposing that the church, with its 8 billion pound endowment, purchase the 400 million pound loan book. The church could buy it for a reduced rate. They could reissue the loans at their original amount. Or charge only a small amount of interest if they needed to cover costs. Or, they could forgive the loans outright.

Imagine a single mother working two jobs who finds herself unexpectedly unable to pay both rent and the babysitter one month — maybe her boss cut her hours or she had to take off to take her kid to the doctor. She takes out a loan of a few hundred dollars just to cover this one month. Belts will tighten next month. They have to because the paperwork she signs, complicated and dense by design, means she’s now paying an annual interest rate of 5,853%.

Before she knows it, within months this mother owes more than $20,000. Until, one night, she comes home late, weary in her soul as well as her bones, to find a letter: “We are followers of Jesus Christ who are trying to take his teachings seriously. In his name, your debts have been forgiven. Merry Christmas!”

It is painful how predictable the end of this story is. To be fair to the Church of England, there were many within the hierarchy who wanted to buy Wonga’s loan book. But there were legal structures creating red tape, and complex bureaucracies to navigate, and political will to muster. And the church did not buy the loan book. That single mother did not receive a letter forgiving her debt.

I’ve been heartened recently by stories of churches actively trying to live out the radical gospel of Jesus in new and impactful expressions. This is good news, truly.

And we need more. We need more churches and we need more Christians to take the teachings of Jesus seriously and risk it all for the sake of healing the world. Pay off debts, partner with social entrepreneurs creating new economies, dismantle and rebuild systems that keep people in poverty, think with creative abandon about how to align what we say we believe with how we live in the world.

This is the work of the church. And whether people fill the pews or not, it’s still the work the church must be doing because it’s the work the baby who was born in a stable came to show us how to do. It’s radical and filled with hope, a true expression of the meaning of Christmas.

It doesn’t take a genius to see that the world is falling apart. What a great time to be alive! Now is the moment to start thinking in a new way, because Jesus did not show up and walk the dusty roads of Galilee so that we could survive and hoard assets, keeping them to perpetuate a narrow understanding of Christian expression. This Christmas is a perfect time to follow the lead of the baby who changed the world.

(The Rev. Amy Butler served as the seventh senior minister of The Riverside Church in New York City. She is now engaged in the creation of Invested Faith, marrying the resources of the church with social innovation. Learn more and connect with her at pastoramy.com. The views expressed in this commentary do not necessarily reflect those of Religion News Service.) 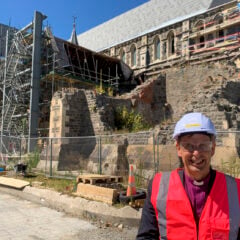 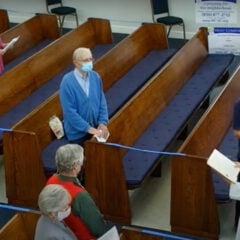