(RNS) — Christianity Today’s recent editorial calling for the removal of President Trump from public office has drawn both enthusiastic support and bitter attacks from evangelicals. Some evangelicals on both sides of the debate, however, have agreed on one claim: President Trump has promoted religious freedom in the United States.

As the conversation moves forward, that claim needs to be examined further. A simple thought experiment is a good place to begin.

Of course not. Yet, while on the campaign trail, Trump called for “a total and complete shutdown of Muslims entering the United States,” and as president he has implemented a travel ban based on that call.

When discussing the first iteration of that policy, President Trump said Christian refugees should be favored over refugees of other faiths. 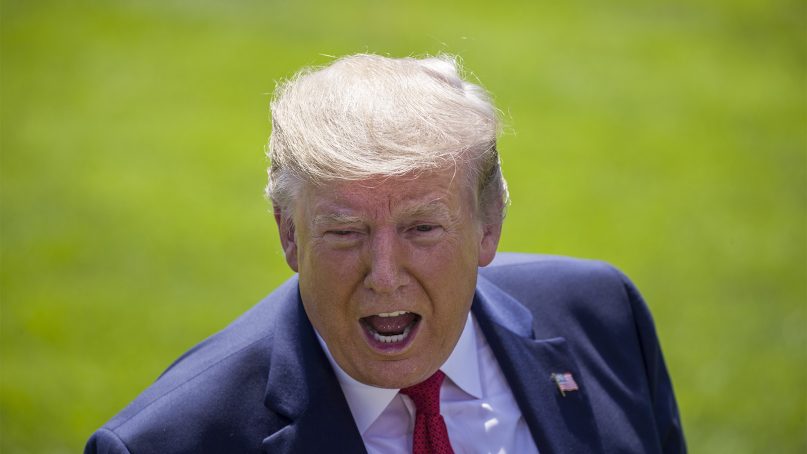 President Donald Trump speaks with reporters on the South Lawn of the White House, Aug. 21, 2019, in Washington. (AP Photo/Alex Brandon)

Trump has also sought to demonize an entire religious community in other ways. He has said, “I think Islam hates us,” and repeatedly promoted anti-Muslim propaganda. President Trump has endorsed and appointed individuals who have called for discrimination against Muslims and declared that “fear of Muslims is RATIONAL.”

Such actions and rhetoric should be condemned, not forgotten or swept under the rug.

It is no excuse to point out that ISIS and aligned groups and individuals have committed heinous attacks around the world. The appropriate response is to combat terrorism, not to discriminate against Muslims. Just as it would be wrong to blame the Christian community for the fact that the Tree of Life Synagogue attacker tried to justify mass murder with Bible verses, it is wrong to blame the Muslim community for those who do the same with the Quran.

But the administration has taken a dramatically different approach to other free exercise claims, prosecuting religiously motivated individuals who have provided humanitarian assistance to migrants in deserts on the country’s Southwest border, for example. The administration also demanded that a Catholic diocese surrender part of its property for the construction of a border wall, despite the fact that the diocese opposes these actions for religious reasons. In this Sept. 1, 2017, file photo, religious leaders pray with President Donald Trump after he signed a proclamation for a national day of prayer to occur on Sunday, Sept. 3, 2017, in the Oval Office of the White House in Washington. (AP Photo/Evan Vucci, File)

Evangelicals usually say they oppose governmental discrimination against particular faiths and support the use of uniform standards to evaluate free exercise claims. These actions by President Trump and his administration flunk such tests. No religious liberty advocate should hail President Trump as a champion or offer uncritical praise for his administration’s policies on these issues.

There are other important matters to discuss, including clashing claims for religious liberty and LGBT equality or reproductive rights. Americans likely will continue to differ over some of these issues, but it would serve the nation well if constructive exchanges could be encouraged on these topics, too.

(Melissa Rogers is a visiting professor at Wake Forest University School of Divinity and a nonresident senior fellow at the Brookings Institution. Her book, “Faith in American Public Life,” was published in October 2019. The views expressed in this commentary do not necessarily reflect those of Religion News Service.)