(RNS) — Dale Partridge has made a living for most of the past decade by saying pithily positive things on the internet.

Best known for starting Sevenly, a social-good clothing company that claimed to raise millions for charity, Partridge has attracted hundreds of thousands of social media followers with his knack for spotting social trends and for his nearly endless supply of motivational sayings, perfect for a T-shirt or Instagram post.

Now the Bend, Oregon, serial entrepreneur, social media guru and bestselling author, who left Sevenly in 2014, has reinvented himself as a “revivalistic preacher and church reformer.” While churning out spiritual messages to his more than 600,000 social media followers, he co-hosts two podcasts (“Real Christianity” and “Ultimate Marriage“) and leads a nonprofit called Relearn Church.

In August he told his followers in an Instagram post that if they followed Jesus, they’d been “declared ‘not guilty’ by the highest court in the universe.” He also told them this past fall to not let discouragement defeat them.

Discouragement, he said in a now deleted Instagram post, is a temptation that needs toughness and tenderness to overcome.

“But in any case, discouragement is not to be tolerated or wallowed in,” his post read. “It’s to be fought.”

This spiritual advice, typical of Partridge, can stand with the words of the best religious thinkers.

Perhaps because, it turns out, his advice came from two top religious thinkers.

The above sentiment about discouragement was borrowed nearly word-for-word from DesiringGod.org, a website founded by the widely read evangelical author and preacher John Piper. The “not guilty” line comes from the late author and theologian A.W. Tozer. (A post on the Relearn Church website was later updated to include the correct attribution and link to Piper’s site.)

A review of Partridge’s writings shows that the plagiarism in these posts is not a one-time mistake. According to critics who have tracked his tweets and Instagram posts, Partridge has commonly passed off quotes from celebrities, musicians, fellow entrepreneurs, authors and public figures including Ricky Martin, John Wooden, Ron Finley and Martin Luther King Jr. as his own. Partridge’s habit of plagiarizing quotes even inspired a “Fake Dale Partridge” Twitter account, which reposted Partridge’s tweets from October 2014, along with the correct attribution.

In an interview with Religion News Service, Partridge admitted that he has unintentionally used others’ work without attribution but said the problem is now in the past.

“I have no problem admitting that was a past failure,” he said. “But I don’t think it’s persisting.”

Partridge also said that in his early 20s, he embraced something called “the uncopyright movement,” which put forth the idea that “all ideas are God’s ideas.” That belief, he said, also led him to be careless.

“That is to say, in my previous immaturity, I projected my personal perspective onto other people’s work and allowed a handful of unoriginal pieces of content (tweets, social media sentences, etc.) to be perceived as my own,” he said in an email. “It was wrong and I have repented of it.”

Partridge also said that at times, he was in a rush to post new content online and failed to be careful.

“The intense demand for churning out content as a social media personality and the speed of preparing notes for dispersion online becomes an easy trap to carelessly use a sentence or two from your notes, without citation in your digital content,” he said.

Heidi Campbell, professor of communication at Texas A&M University, said Partridge is one of a new kind of emerging “religious digital creatives.”

Partridge fits in the latter category, using his social media savvy to connect with his hundreds of thousands of followers and to promote his spiritual message. 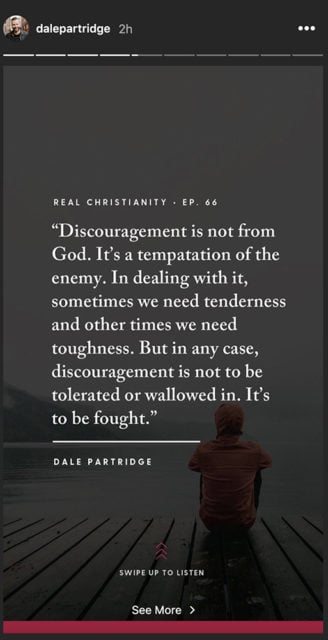 Partridge said that God has forgiven him for his past wrongs. “The Lord is continuing to teach me valuable lessons as a content creator and, while broken and in need of grace, I believe I am becoming a better man for it,” he said. Screengrab

He told RNS that he’s learned from his past mistakes and hopes people will not hold them against him.

“I learned a lot in my years as a businessman,” he told RNS by email. “I was young and prideful and even hurt some of the people closest to me in that season. However, through painful humility, I have been matured by God. I’m not perfect. I’m still broken like anyone else. But I have grown from that time and I’m trying to learn how to be a man worthy of the calling before me today.”

Nick Laparra, a former pastor and host of the “Let’s Give a Damn” podcast, has had concerns since he started to follow Partridge’s social media after reading Partridge’s 2015 book, “People Over Profit.”

“I just started noticing he was trying really hard to say smart things,” Laparra said. “And then I was like, wait, I’ve heard that before.”

He began to run Partridge’s tweets through a Google search. Every time he came across a quote that was not original, he’d reply to Partridge, pointing out his concerns. Eventually, the two talked in 2016.

Laparra said Partridge defended his tweets at first, pointing to a line in his Twitter bio saying most quotes were not his own.

Laparra pushed back, saying that a line in his bio was not enough, and asked why Partridge wouldn’t just quote the author. Partridge responded by tweeting: “A long story that I’m writing on the future of social citation. You’ll be taken back when you have more information.”

Then Partridge seemed to change his mind and offered to apologize on his blog.

In a 2016 text message exchange that Laparra shared with RNS, he thanked Partridge for his blog apology, which has since been deleted. But Laparra believes Partridge’s plagiarism didn’t stop.

Laparra is concerned about Partridge’s rebranding as a pastor and the leader of a house church planting network. “One of the biggest ways that you are disqualified from leading people in a ministry setting is that you lose their trust,” Laparra said. “I can’t come to your church if I can’t trust what you are saying.”

Partridge first drew the attention of Jake Dockter, a faith-based activist in Portland, Oregon, when Partridge criticized Jarrid Wilson, a pastor who had advocated for suicide prevention, not long after news broke about Wilson’s death.

“Church, it is not accepting or tolerant or understanding or compassionate,” Partridge wrote in a since-deleted Instagram post, “to hire a man to shepherd a flock of God’s people who is openly struggling with mental illness. It’s unbiblical, it’s reckless, it’s dangerous, and as we’re seeing, it’s an easy target for the enemy to reign down national tragedy on the church.”

Dockter was shocked by the post. He said many churches have a “shame culture” when it comes to mental illness and treat suicide as a taboo topic. Partridge’s post, he said, reflected that culture.

The idea that pastors with mental illness should be banned from the ministry was, he said, “counterproductive and harmful.”

“It forces people to go back in the closet and not talk about mental health,” Dockter said.

Dockter, who considers himself progressive, also disagreed with Partridge’s claims on the role of women and LGBTQ people in the church. He said he began to wonder, “Who is this guy and why should we listen to him?” He then began to look at Partridge’s social media presence and his concern grew.

Partridge, who said that he was friend of Wilson’s, told RNS that he regrets some of his comments about mental illness. An Instagram post, he said, was not the right place to express his thoughts on the issue.

In turning to ministry with Relearn Church, Partridge has begun to get some formal education, enrolling part time at Western Seminary, an evangelical seminary with campuses in Oregon, Washington state and California. Partridge has highlighted his education on his personal and nonprofit websites.

In an email, the school confirmed his status but said it could not comment about Partridge’s admitted plagiarism. The school did provide a link to its rules about plagiarism.

Recently, Partridge has begun focusing on “dones” — people who are Christians but have given up on the institutional church.

“Millions of Christians are leaving the church, the institutional expression of the church,” he said in an interview. “And I would say they’re not looking for less Jesus. They’re actually looking for more Jesus.”

Partridge said people come to church seeking community and a spiritual experience — and instead get pop-culture sermons and programs. Instead of participating in a community, they are spectators, and often, he said, they feel alone in pews filled with people.

“I think people are homesick for the biblical expression of church,” he said. “They’re kind of living on starvation rations of relationship there. They’re connected on the internet but they don’t have a close community, where they feel like they have a group of people that love them regardless of their failures and their faults and their sin.”

To fill that need, Partridge has begun to advocate for house churches — small, autonomous congregations that meet in homes. He calls this approach “biblical church,” which he outlines on his podcast, on the Relearn Church website and in his new book, “Real Christianity,” which was No. 1 in new releases under “Christianity” on Amazon.com in early January.

Relearn Church, described until recently on its website as “a global church planting ministry,” works with a handful of house churches in the U.S. and overseas that have a similar approach to ministry, according to Partridge. Until recently the site for the nonprofit  — which was incorporated in 2017, according to tax documents — also listed a group of team members who contributed to the site.

But after RNS recently emailed contributors listed on the website, asking for details, the names disappeared.

Partridge said the group is reorganizing and will be adding a list of new contributors in 2020. The group will also begin producing a curriculum, he said.  During its first year, the nonprofit received about $70,500 in revenue. In 2020, the group hopes to bring in $250,000, according to its tax documents. Visitors to the Relearn Church website can read articles, purchase Partridge’s books and donate to the ministry.

Until recently, the site included a quote promoting Partridge’s “Real Christianity” book that was attributed to Richard Jennings of Dallas Theological Seminary.

“This book is like a splash of warm water on your face,” the quote read. “You still get the shock of being wet without the sting of cold words. It’s direct. It’s bold. But most of all, it’s accurate to the Scriptures.”

However, a spokesman for Dallas Theological Seminary said the school has no record of a faculty member, student or staff member by that name.

On a recent episode of the “Real Christianity” podcast, Partridge’s wife, Veronica Partridge, read the endorsement aloud, this time citing its author as Richard Davis.

Dale Partridge told RNS that as far as he is aware, Davis does not exist either. The quote praising the book, he said, was a “mock quote” used during the design of the store on the Relearn Church website.

When the site went live, the mock quote was published online and then later recopied for his podcast notes as “Richard Davis.” The quote was removed from the Relearn Church website after RNS asked about it. RNS also found several cases of plagiarism in the short book.

Partridge said there was no intention to deceive anyone with the endorsement. “I apologize for this embarrassing error. I spoke with my team and we are going to slow down and be far more diligent with anything we release.”