(RNS) — Three years ago, Mormon officials in Oregon heard one of their members admit he had abused one of his daughters.

They heard his confession. Then called law enforcement.

Kristine Johnson of Oregon claims The Church of Jesus Christ of Latter-day Saints violated the doctrine of confidentiality when it disclosed her husband’s confession, leading to his arrest and imprisonment.

It’s a case that legal observers are watching closely. Depending on the outcome, at least one legal expert said this lawsuit could have serious implications for the way houses of faith report abuse.

The lawsuit, which was filed Friday (Jan. 3) in Marion County Circuit Court in Oregon, seeks $9.5 million for the family’s emotional distress and loss of income, and $40,000 to pay for criminal defense. Included in the lawsuit are four of the couple’s five children.

According to the suit, Johnson learned in 2016 that her husband, Timothy, engaged in inappropriate conduct with his daughter when she was underage. After that, the suit says, the couple followed the rules and scriptures of the Latter-day Saints, which require congregants to “confess their sins unto the brethren before the Lord.”

Her husband confessed to a number of church leaders in their local stake, a network of local congregations, who participated as members of the church court. He told them he engaged in improper sexual contact with his minor daughter, the lawsuit states.

After that, a member of the court reported the confession to state authorities, according to the lawsuit.

The lawsuit claims church leaders failed to tell the couple that if the husband “followed Church scripture and guidance and confessed his sins, that they would report him to state authorities.” 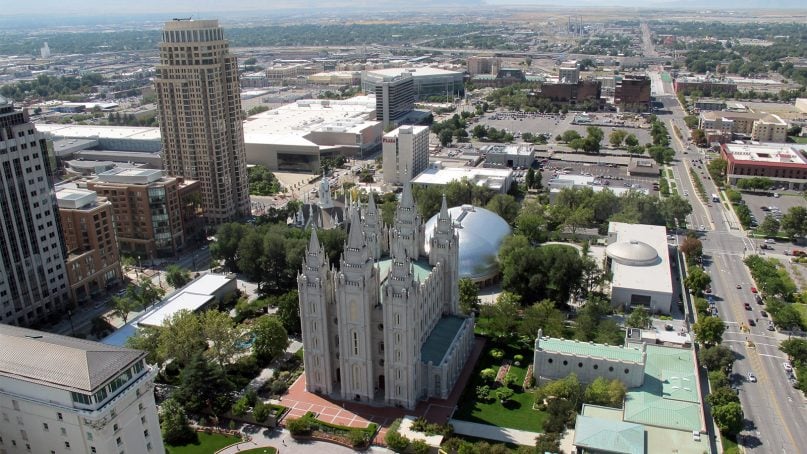 The Church of Jesus Christ of Latter-day Saints has world headquarters in Salt Lake City. Photo courtesy of Creative Commons

Eric Hawkins, spokesman for the Utah-based church, did not elaborate on the church’s doctrines of confidentiality.

He did say, in a statement, that “protecting victims and ensuring proper reporting is a top priority.”

“The Church teaches that leaders and members should fulfill all legal obligations to report abuse to civil authorities. In some circumstances, those obligations may be governed by their professional duty and in others by their role as clergy,” Hawkins said.

The state of Oregon has a mandatory reporting law that requires workers in certain professions to report suspected abuse or neglect. Mandatory reporters in Oregon include school employees, physicians, licensed professional counselors and clergy members.

However, the law does have exceptions. Clergy members are not required to report such information “if the communication is privileged.”

The lawsuit claims that Latter-day Saint scripture requires members to confess their sins. Church doctrine, according to the lawsuit, also requires clergy and members of the church court to “maintain strict confidence of such confessions.”

It quotes Doctrine and Covenants 58:42-43: “Behold, he who has repented of his sins, the same is forgiven, and I, the lord, remember them no more. By this ye may know if a man repenteth of his sins-behold, he will confess them and forsake them.”

The suit also quotes Doctrine and Covenants 59:12: “Thou shalt offer thine oblations and thy sacraments unto the Most High, confessing thy sins unto thy brethren, and before the Lord.”

Stake officials told the couple that confession and repentance were dictated by church faith and were “necessary to spiritual health and to be in the presence of God,” according to the suit.

Brandt said that church officials harmed the Johnson family when they contacted state officials and reported the abuse.

“It’s devastating to the family,” Brandt said. “It’s bad enough what happened to the one child.”

“These people were severely damaged emotionally and financially, and they shouldn’t have been,” Brandt added.

Christine Bartholomew, a University at Buffalo School of Law professor who has focused on clergy privilege, said clergy have been actually willing to share information with authorities. She said clergy would often frame a conversation in a way “that takes the communication out of the definition of the statutory privilege.”

In her research, Bartholomew found it was more likely that the clergy were willing to share such information “when the case involved a violent crime, murder, rape, etc.,” she said.

“They were still willing to do so in instances of child abuse when the perpetrator of their abuse was not a member of the clergy,” Bartholomew said.

However, when it involved a member of the clergy, “the results unfortunately flipped and clergy tended to provide a much broader definition of protection,” she added.

Bartholomew said this particular case is “akin to saying a clergy member committed some type of malpractice for breaking the seal and most of the time courts have not been willing to find liability for that type of conduct.”

Still, Bartholomew said she is troubled by this lawsuit.

If the family wins this suit, Bartholomew said, she fears other churches may not share information they have about a child abuser.

“If this case were to be successful, I worry that it would chill the advancements we’ve made in creating that informational pipeline which has been a hard road to actually begin to pave,” she said.