CAMBRIDGE, Mass. (RNS) – The Cambridge City Council has adopted a resolution urging India to repeal its Citizenship Amendment Act and halt a planned national citizenship registry, both of which have prompted massive international backlash and allegations of anti-Muslim bias.

Cambridge is the second U.S. city to adopt such a measure. On Feb. 3, the Seattle City Council approved a similar resolution condemning the CAA and opposing the National Registry of Citizens.

Adopted unanimously on Monday (Feb. 10), the resolution was co-sponsored by Cambridge Mayor Sumbul Siddiqui, a Pakistani immigrant who last month was elected as the first Muslim mayor in Massachusetts, along with councilors Patricia Nolan, Quinton Zondervan and Jivan Sobrinho-Wheeler.

The resolution called on the Parliament of India to uphold its constitution by repealing the Citizenship Amendment Act, which makes it easier for non-Muslim refugees fleeing India’s neighboring Muslim-majority countries to become Indian citizens.

The law, critics say, discriminates against Muslims, violates the country’s secular constitution and is consistent with the Hindu nationalist rhetoric of Prime Minister Narendra Modi and his far-right Bharatiya Janata Party. Before floating the CAA, Modi unilaterally repealed a constitutional amendment that protected the autonomy of Muslim-majority Kashmir and began implementing a National Register of Citizens, ostensibly aimed at ousting illegal immigrants but ultimately, those critics claim, targeting Muslims and other minorities for detention and deportation.

“The Modi regime’s repressive and racist policies are inconsistent with Cambridge’s values as a city that welcomes South Asian communities of all castes and religions,” the resolution said.

The measure also urged India to instead help the region’s refugees by ratifying United Nations treaties, asked U.S. congressional officials to censure the Indian government and expressed “solidarity” with local South Asians “regardless of religion and caste, acknowledging the pain and hurt felt by members of the South Asian community as a result of these policies.” 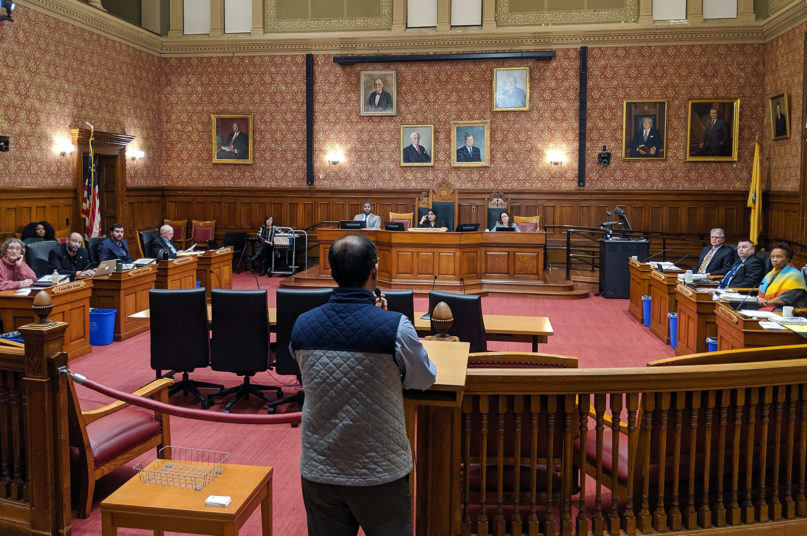 The city has a sizable and civically engaged South Asian population, particularly due to Cambridge’s elite universities and the area’s many medical centers, technology companies and research organizations. This weekend, Cambridge’s Harvard Kennedy School students will host its 17th annual India Conference at Harvard, where panelists will discuss issues including diaspora activism, the implication of the CAA and NRC, and Muslim identity in India.

“At present, there is a political party in power in India that is bringing laws and process and systems in place to rob Muslims – Muslims like me – of their citizenship, even though Muslims have been part of that land for over a thousand years,” said Kashif-ul-Huda, a Cambridge resident and Muslim immigrant from India who spoke during the hearing. “The discriminatory laws being put in place will make millions of people, not just Muslims, illegal in their own lands for lack of proper documentation or even minor errors in their documents.”

Rachel Wyon, a Cambridge resident born in India to British parents, described the CAA and NRC as unconstitutional efforts to disenfranchise Muslims, Dalits and other marginalized groups in the country.

“Most of us can recognize the echo of the 1930s in Germany when the Nazi government took similar steps – closely parallel to the NRC and CAA – which we know now were the initial steps toward the Holocaust,” she said at the hearing.

Cambridge’s resolution follows a series of local rallies related to the CAA by members of the South Asian diaspora, including a 24-hour protest in Harvard Square last month against the policies. In December, an open letter signed by more than 100 Harvard University students condemned the laws as well as Indian law enforcement’s brutal crackdowns on activists protesting the laws.

But some locals have also championed the CAA and NRC. Many of these demonstrations have been matched with counterprotests by local Indian American and Hindu activists.

In Seattle, too, Hindu activists railed against the resolution.

“Thousands of phone calls and emails were made, with people wanting to take charge of defining our voice, making content and visual material, hundreds of small and big meetings, all aimed at educating the City Council on the facts on why CAA is needed,” Seattle organizer Atul Hirpara said in a statement, noting that around 500 community members showed up at the hearing to protest the resolution.

“India’s Citizenship Amendment Bill offers much needed relief and a shortened pathway to citizenship for thousands of refugees fleeing unquestionable, well-documented, and continuing religious persecution in Pakistan, Bangladesh, and Afghanistan,” Hindu American Foundation co-founder Mihir Meghani argued in a statement, adding that the Seattle resolution ignored the plight of these non-Muslim refugees forced to flee their homes and seek refuge in India.

The two leaders will hold an event at a cricket stadium together, expected to draw more than 100,000 attendees. That’s about twice the size of the crowds attending the two leaders’ “Hello, Modi” rally in Houston last year, which Cambridge officials called a demonstration of “the growing threat of far-right racist politicians building solidarity around the world.”

News
Why they broke with Hindu nationalism: Four former zealots speak out
Follow us on Facebook!
Submit your photos to RNS