VATICAN CITY (RNS) — Pope Francis returned to the Adriatic coast city of Bari on Sunday (Feb. 23) to deliver a powerful message of peace to the nations and faiths of the Mediterranean region.

“Jesus’ love knows no borders or barriers,” Francis said to the thousands gathered for Mass at the St. Nicholas Basilica, where 58 bishops, patriarchs and other dignitaries from more than 20 countries came to the end of a five-day summit with the theme “Mediterranean, frontier of peace.”

Francis has made Bari, where the noble families of Europe came to venerate the relics of St. Nicholas before embarking on the First Crusade of 1096, a stage for ecumenical outreach. In 2017, the relics themselves, which were abducted from the saint’s grave in Asia Minor in 1087, were loaned to Russia, where Nicholas is revered, as a good will gesture to the Russian Orthodox Church. In July 2018, Francis gathered representatives from the many Christian rites of the Mediterranean littoral for an ecumenical prayer for peace.

“I think that we could call Bari the capital of unity, of the unity of the Church,” Francis told the bishops present on Sunday, adding that “it wasn’t an accident” that he chose this city for the ecumenical meeting in 2018.

“In this epicenter of deep fracture lines and economic, religious, confessional and political conflicts, we are called to offer our witness for unity and peace,” he said.

Professor Giuseppina De Simone, who teaches theology in the Mediterranean at the San Luigi Pontifical University of Naples, described Bari as “a bridge between the East and the West,” capable of promoting a meeting of cultures, religions and traditions.

Few cities encapsulate the often painful history of the Mediterranean countries as Bari does. Located at the top of Italy’s “heel,” it has seen war, persecution, martyrdom, reconciliation and redemption. The crusade launched here caused 1.7 million deaths, by some estimates. Its citizens in turn faced Arab, Byzantine, Norman and Saracen invasions. In Otranto, two hours south, more than 800 people were murdered in 1480 for refusing to convert to Islam.

But Bari’s record of dialogue and reconciliation is just as deep. In 1098, 50 years after the “Great Schism” that split Eastern Orthodox churches from Roman Catholics, bishops of the Western church met in Bari for a synod aimed at reconciling the two traditions. Though that effort failed, its spirit endured until this day. 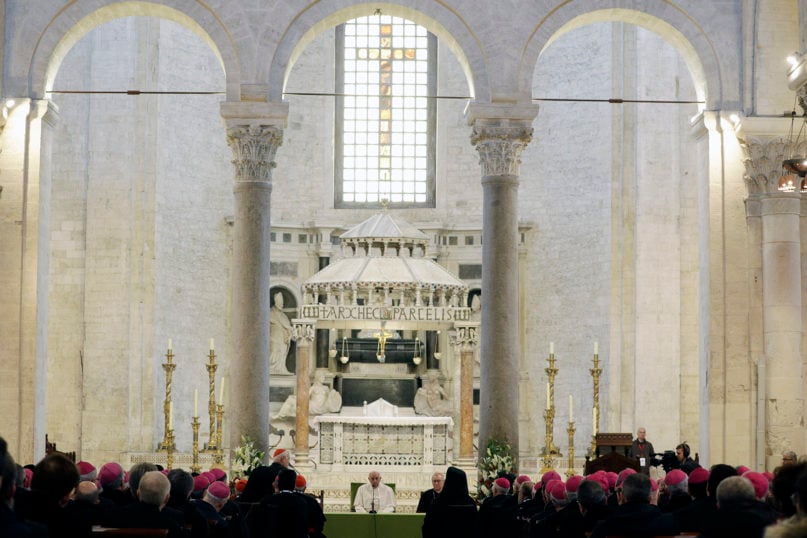 Pope Francis listens to a welcome speech inside the St. Nicholas Basilica on the occasion of the “Mediterranean, frontier of peace” conference in Bari, Italy, Sunday, Feb. 23, 2020. (AP Photo/Gregorio Borgia)

“The Mediterranean is a theological place because, with its contradictions and the rich humanity that characterizes it, it helps to further understand the message of the Gospel,” De Simone told Religion News Service in an interview.

“It’s a place where you can sense the possibility and tension toward a unity that doesn’t mortify diversity but values it, a place that understands unity in the human family to which we are called and is given to us in Jesus Christ,” she said.

“Bari is the image of a Mediterranean that can become a conviviality of differences,” she added.

The pope did not shy from condemning the spilling of blood that continues in the region today. He pointed to the “many hotbeds of instability” plaguing Northern Africa and the Middle East. He warned bishops against “unequal solutions” in Palestine and Israel, which might lead to “new crises.”

Francis voiced concern about rising nationalism and populism, denouncing the “great hypocrisy” of countries who advocate for peace while selling weapons to the highest bidder. He cautioned against the culture of fear and the rhetoric of a clash of civilizations aimed at “justifying violence and fueling hatred.”

The pope also spoke on behalf of refugees and immigrants, who are forced to leave their homes and become prey to indifference, sexual exploitation, forced labor or corruption.

“Let’s raise our voices to petition the governments for the protection of minorities and religious freedom,” Francis told fellow bishops.

De Simone said Bari, and the broader Mediterranean rim, has something to teach the European Union nations. “It’s true that the tensions, the conflicts, often of open war, are unfortunately many,” she said. “But there are many stories of mutual welcoming, of encounter, of sharing and open dialogue among believers.”

She pointed to fruitful initiatives with the Jewish community and to Catholic schools in the region whose student bodies are actually a majority Muslim student body.

As Europe seems to crumble under the growing weight of foreign and domestic pressures, Bari stands as a symbol of dialogue. And here, Francis urged, unite the forces that once nearly destroyed the known world to bear witness to peace.

“This is the work that the Lord gives you in this beloved Mediterranean area: Rebuild the ties that were broken, raise the cities destroyed by violence, let gardens bloom where today there are parched lands, imbue hope to those who have lost it and call those close in on themselves not to fear their brother,” Francis told bishops.

“And look at this (place), which has already become a cemetery, as a place of future resurrection for the entire area,” he added.