WASHINGTON (RNS) — Russia’s human rights record, including its history of mistreating religious minorities, is worsening, according to testimony at a hearing on Capitol Hill Thursday (Feb. 27).

“Unfortunately, the human rights situation in Russia continues to deteriorate, and just when you think things can’t get any worse, they do,” said Rep. Jim McGovern, D-Mass., co-chair of the Tom Lantos Commission on Human Rights, at the hearing in the Rayburn House Office Building.

Elizabeth Cassidy, director of research and policy at the U.S. Commission on International Religious Freedom, said Russia’s “malign activities around the globe are clearly evident, yet its systematic, ongoing, egregious repression of religious freedom is less well known.”

She said Jehovah’s Witnesses, who were banned as “extremist” by the Russian government in 2017, are “among the groups most brutally targeted under these laws in recent years,” as praying, preaching and dissemination of materials outside designated places of worship are often prohibited.

As of the day of the hearing, the Jehovah’s Witnesses report that 35 of their members are in prison, 25 are under house arrest and 29 have been convicted in Russia.

“These violations are escalating, spreading through the country and even across its borders,” Cassidy said. 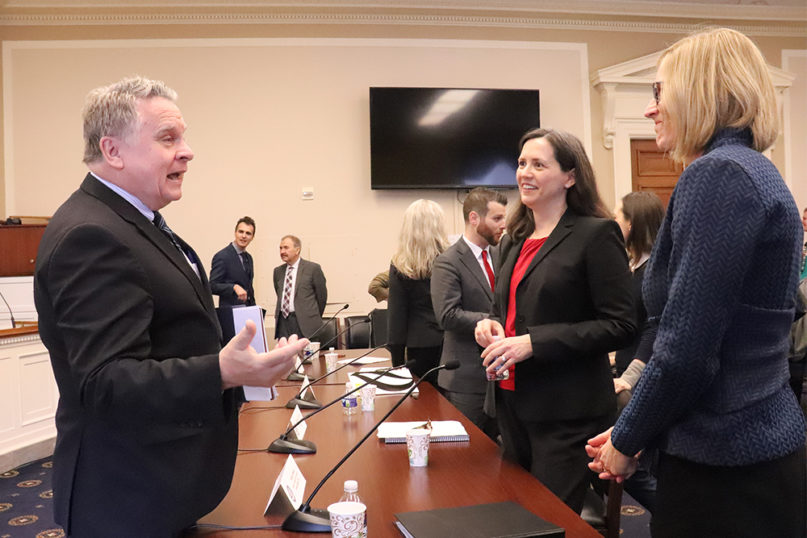 The country’s extremism laws extend to other religious groups as well, prompting the prosecution of Muslims and repression of peaceful activities of Scientologists, according to Cassidy.

The State Department has placed Russia on its second-tier watch list but for the last three years USCIRF has recommended that it be instead declared a “country of particular concern,” a designation for the most egregious religious violators.

The hearing held by the bipartisan congressional human rights commission marked the fifth anniversary of the assassination of Boris Nemtsov, prominent opposition leader and critic of power abuses under Russian President Vladimir Putin. Other panelists reported on Russia’s targeting of LGBTQ individuals, environmentalists and media outlets. Some panelists noted that the attitudes and actions of the Russian government when it comes to human rights differ from the country’s broader public.

“While society has become more united in its criticism of the Kremlin, violence and abuse of citizens has increased, the use of torture and police abuse is ramping up,” said Melissa Hooper, director of foreign policy advocacy for Human Rights First. “Human rights defenders, journalists and lawyers continue to be targeted.”

Earlier this month, Russia’s Ministry of Foreign Affairs issued its own assessment of human rights across the globe and questioned the United States’ role as a protector of human rights. Its report stated that “systemic issues of the American society” — including racism, anti-immigrant activity and mistreatment of prisoners — “get only worse.”