(RNS) — Last fall I joined 30,000 Muslims gathered in Houston, Texas, to attend the Islamic Society of North America (ISNA) convention, the largest annual Muslim assembly in the United States. Though the event’s headliner was “The Daily Show” host Trevor Noah, when Bernie Sanders addressed the crowd, the reaction was extraordinary.

The early polling for the Democratic primary race and rallies elsewhere would support what I saw in Houston, but it still surprised me. As a Muslim American and a scholar of North American Islam who has spent the last decade studying Muslim leadership in the United States and Canada, I’ve never seen American Muslims organizing politically for a presidential candidate, much less a progressive one, on the scale they have for Sanders.

It’s no secret that Donald Trump has exacerbated American suspicions of Islam and Muslims, but many Muslims see establishment Democrats as no less guilty of perpetuating Islamophobic suspicions. The Obama administration’s 2014 “Countering Violent Extremism” program singled out Muslims as uniquely prone to the perpetuation of ideological violence, and Obama’s failure to shut down the detention facility at Guantanamo Bay, in addition to his use of drone strikes in Pakistan, Somalia and Yemen that killed Muslim civilians, crushed the optimism felt by many American Muslims after his election.

Hillary Clinton offered Muslims little better. In her 2016 presidential campaign, Clinton repeatedly promoted Muslims as a boon to U.S. national security. “We need American Muslims to be part of our eyes and ears on our front lines” to prevent terrorist attacks, Clinton said. The implication was that Muslims’ value to the country was contingent upon their ability to identify “bad Muslims” threatening the U.S.

Sanders, meanwhile, was already demonstrating his traction with Muslim voters. His surprising upset of Hillary Clinton in Michigan in the 2016 cycle had to do in no small part with the state’s sizable Arab and Muslim population.

Going into the 2020 race, Sanders immediately established a relationship with Muslim communities by appointing Faiz Shakir, an American Muslim civil rights lawyer, as his campaign manager. While other Democrats have also reached out to Muslims, political scientist Youssef Chouhoud told the Los Angeles Times recently, “Sanders has done it first and done it bigger.” 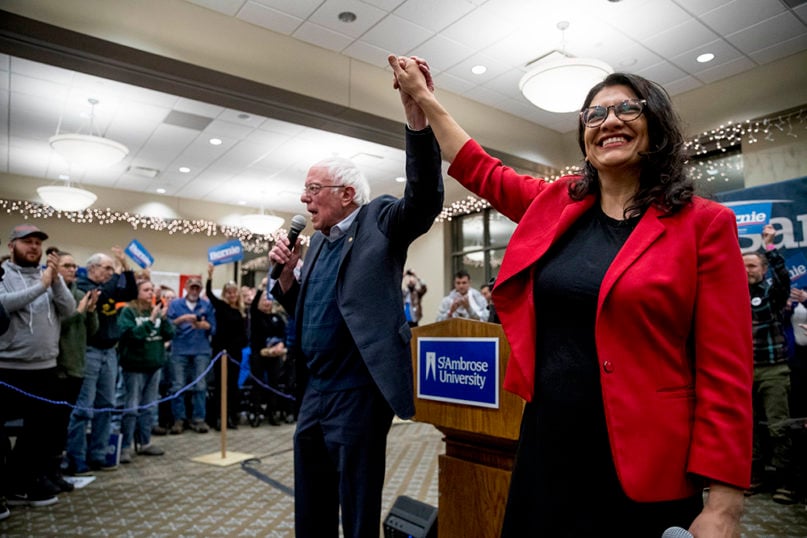 Sanders secured the endorsements of high-profile Muslim political leaders like Ilhan Omar and Rashida Tlaib after defending the nation’s first two Muslim congresswomen against Trump, who told them to “go back” to where they came from. In her endorsement video, Tlaib, who represents Michigan’s 13th congressional district, has said that, unlike other politicians, Sanders is “not going to sell us out.”

The demographics of the American Muslim vote favor Sanders. They skew young: 37% of voting Muslims are under 30; 80% are under 50. A study by the Muslim-focused Institute for Social Policy and Understanding showed that Muslim voters, particularly after 9/11, are on the whole more liberal than other Americans and tend to be progressive on issues like healthcare, immigration, criminal justice reform and climate change.

But Sanders has also campaigned hard for Muslim votes, and the resulting enthusiasm for him has put thousands of grassroots Muslim organizers on the street for Sanders, phone banking, knocking on doors, canvassing at mosques, creating campaign videos and holding “Super Tuesday Qur’an Khatms” (the complete recitation of the Qur’an). Many refer to Sanders by the affectionate nickname “Amo Bernie” — Uncle Bernie, in Arabic.

To be sure, any Democratic candidate would likely improve the current situation for Muslims in America. Joe Biden has spoken against Trump’s Muslim travel ban. While Biden condemned the ban, however, in doing so he also seemed to reinforce Clinton’s equation of Muslims with violence, arguing that the ban was “like putting up a great big recruiting banner for terrorists.” Biden’s support for the war in Iraq also calls into question his foreign policy record for many Muslims.

Sanders, by contrast, voted against the Iraq War and explicitly promised that his first executive order would be “to reverse every single thing President Trump has done to demonize and harm immigrants, including his racist and disgusting Muslim ban.”

The downside of Bernie for many otherwise progressive Democrats is the electability question: They worry that his politics are too controversial to risk in a do-or-die election. But for American Muslims who have never felt empowered by “politics as usual,” the “moderate” candidates are the bigger risk. For Muslim communities that have been marginalized and othered in the construction of American national identity, Sanders represents the potential for a different future — and a new kind of politics.

The voters who came out for Biden on Super Tuesday seem to have rejected Bernie’s revolution, but Muslims welcome it. As religious studies scholar Edward E. Curtis IV has argued, “a political revolution is needed to address (America’s) Muslim question. …” For a task of this magnitude, Amo Bernie seems like Muslims’ best bet.

(Sajida Jalalzai is an assistant professor of religion at Trinity University in San Antonio, Texas, and specializes in the study of Islam in North America. The views expressed in this commentary do not necessarily reflect those of Religion News Service.)