(RNS) — Were you — out of quarantine boredom perhaps — to Google “patron saint of pandemics,” you might be surprised by the results.

“It’s incredible but it’s seemingly true – there is a Saint Corona and she is one of the patrons of pandemics,” according to the website of the Roman Catholic Diocese of Lansing, Michigan.

Even more incredible, the diocese claims, the remains of the second-century saint are in northern Italy, the epicenter of the recent outbreak of the coronavirus in Europe.

The diocese cites Gloria.tv, a website for Catholic news and memes, as its source for the claims about St. Corona.

St. Corona’s purported patronage against pandemic and plague also has been pointed out on social media and on popular Catholic website Aleteia.

“She’s been viral online,” the Rev. Rich Pagano said in Monday’s (March 16) episode of The Catholic Show podcast, noting that people were praying to the saint in northern Italy.

Not so fast, tweeted Candida Moss, the Edward Cadbury Professor of Theology at the University of Birmingham, U.K.

“You have people praying to the patron saint of treasure hunters, which seems to be against CDC guidelines,” Moss told Religion News Service.

There is a St. Corona, and her remains are in Anzu, a town in northern Italy, she said.

But her story is complicated, and there is reason to believe she may have been invented, Moss said.

St. Corona’s story is recorded centuries after she reportedly lived near what is now Syria, according to the scholar. Her name comes from the vision of two crowns she reportedly saw, according to later legends — one for herself and one for St. Victor, with whom she generally is depicted.

In the earliest version of St. Corona’s story, written by a fourth-century deacon in Antioch, St. Corona publicly confessed her faith and comforted St. Victor, a Roman soldier, as he was being tortured and killed for his Christian faith. Afterward, she, too, was martyred — tied between two palm trees that had been bent to the ground and torn apart when the trees were allowed to snap back to full height.

She’s not the patron saint of pandemics or infectious diseases, according to Moss. 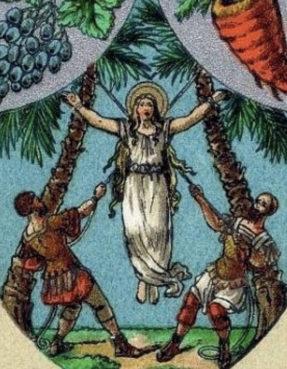 Saint Corona was killed by being tied between two palm trees. Image courtesy of Creative Commons

You can turn to St. Edmund or St. Roch for that, she said.

St. Edmund and St. Roch became associated with pandemics long after their deaths, when they were believed to have saved people from the plague, she said.

Should St. Corona be associated with any healing miracles during the current coronavirus pandemic, her new patronage just may stick.

“I prefer they didn’t, but if enough people decided St. Corona was the patron saint of the coronavirus, she’s just going to become that,” Moss said.

By popular acclaim of the internet, she already may be on her way.