(RNS) — Caleb Borchers planned to preach on the second chapter of the biblical Book of Haggai as he met with his five-year-old church in Asa Messer Elementary School in Providence, Rhode Island.

In the end, the sermon on Sunday (March 15) was one of the few things that turned out the way Borchers thought it would.

Along with other schools in the Ocean State — and a total of 45 states across the country — the public school where the church meets was swiftly closed due to concerns about the coronavirus. Those decisions affected not only schoolchildren, staff and their families but also the churches that had been meeting in those buildings on weekends.

“I was hoping that we’d get one more service in on the 15th,” said Borchers, pastor of The Feast Church, a congregation affiliated with the Churches of Christ. “So it wasn’t until about noontime on the 13th that we knew that the 15th we’d be going to digital church.”

Church plants — relatively new congregations that often start without their own physical place to meet — are facing some of the same logistical challenges as other congregations adjusting to worship outside their usual locations. But these fledgling churches are, in some ways, more nimble and more vulnerable. 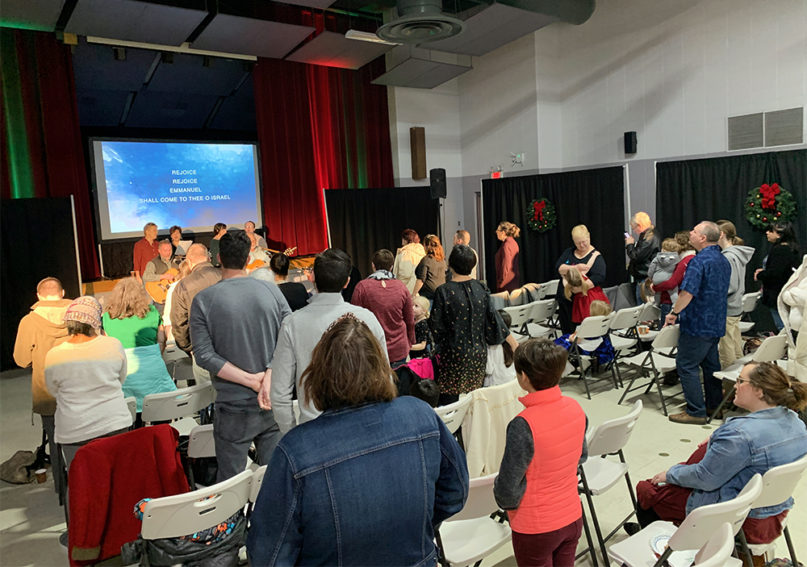 Borchers, 36, had previous podcasting experience with live broadcasting via social media. So he already had a green screen and lights in his basement that helped him provide a livestreamed sermon via his church’s website for his congregation with an average attendance of 45.

“We have a pretty young congregation — mostly young families, kids at home,” he said. “And so the technology has not been a huge obstacle for our folks.”

Still, pastors of newer churches are faced with the dilemma of figuring out how to reach and keep new members without “pressing the flesh,” said Pastor Bruce Bates, New England coordinator for Kairos Church Planting.

“We thrive on connection and meeting people, and, as I’ve been talking to planters, we’re trying to find new ways to connect,” said Bates, a leader of a national Churches of Christ network that has started 47 churches since 2005 and now has about half that number currently in existence. 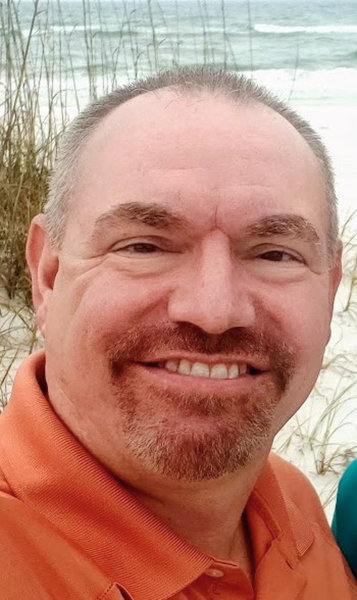 “We’re getting half the viewership that we would normally get through a meeting on Sunday morning; I’m sure those will pick up some,” he said of churches whose pastors have had to scramble for new ways to keep worship and pastoral relations going. “I’ve seen a big increase this week in churches ramping up, getting their video ready, figuring out how to make all the technical side of it work well. I think a lot of churches will have a better week this week.”

He estimates that about 50% of the churches in his network meet in a public school. Most pay between $300 and $500 a week to temporarily turn those spaces into sanctuaries.

Scott Thumma, a Hartford Seminary sociologist of religion and director of the Hartford Institute for Religion Research, estimated that about 2% of U.S. congregations meet in schools. About 20% of the locations of multisite megachurches are schools.

He said evangelical and immigrant congregations are most likely to meet in public school settings.

Bay City Church in San Francisco, a church with members who had met in a school and were now complying with a “shelter-in-place” order, urged its “city groups” to become “digital groups,” meeting via Skype, Google Chat or Zoom. It also created a private “Bay City Living Room” on Facebook, according to Pastor Eddie Williams in an announcement on the church’s website.

Jason Rollin, lead pastor of five-year-old City Light Church in Rochester Hills, Michigan, had four days — twice as many as Borchers in Rhode Island — to make alternative plans for worship. His church of about 400 had been meeting at a public high school for two services each Sunday.

He already had a system designed by Portable Church Industries to set up and take down the church-like atmosphere every week and was able to quickly move to a warehouse.

But his church had never offered a livestream before.

“We just basically took our tech gear and what we had available to us,” said the 40-year-old Rollin. He and a team of about 10 people, including band members, worked on the service while congregants watched from home.

“We had to purchase the livestreaming equipment, but we basically just set up in a warehouse, did a DIY, a do-it-yourself kind of a studio, and we had some of our team members designing some lighting and some different atmosphere that we could film from,” he said.

During the service, the nondenominational evangelical church offered chat rooms for “virtual prayer” in a private window with a church team member.

“If people are wanting to give their life to the Lord and make a dedication to him in this time, we have that availability, too, online,” he said. “It’s amazing how much is out there now that you can use to really meet people in a crisis situation like this.” 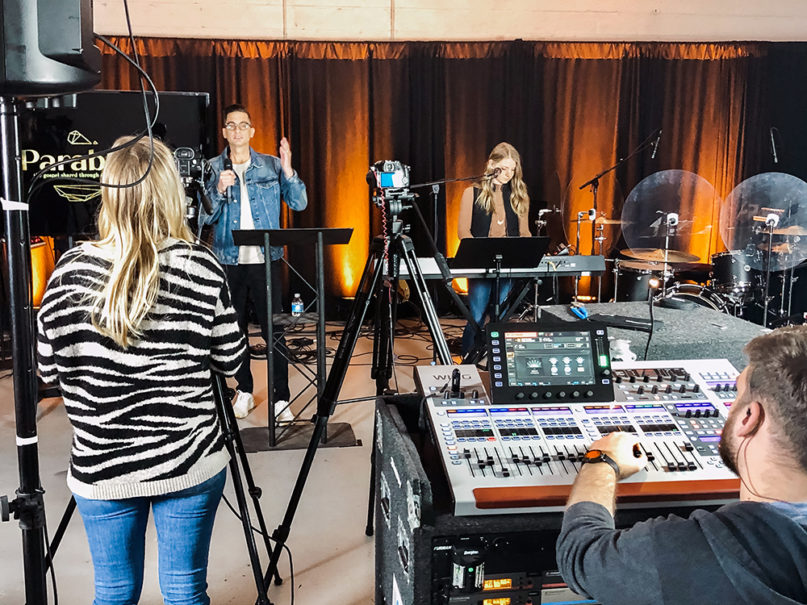 Rollin noted that the temporary transition away from the school building could allow his church, which pays thousands a month to use the facility on Sundays, to help the needy in the midst of the pandemic.

“A blessing in disguise is that we’re not paying rent right now for the school and so that’s money that we can reallocate if we need to help people,” he said.

Midweek gatherings in Bates’ network, whose churches generally meet in schools only on Sunday, include home groups or service projects that have temporarily halted.

“It feels very frozen to me, frankly,” said Bates. “It does not feel socially appropriate or loving or kind to try to do much. You can call people and say hey, checking in on people, seeing if everyone is doing well. We’re checking in on the elderly to see if they’re getting their groceries.”

Southern Baptist Convention leaders are seeking to help church planters, even as the denomination’s North American Mission Board freezes some of its budget and makes other cutbacks.

“We are all praying that things will bounce back quickly, but we are not taking anything for granted,” said NAMB President Kevin Ezell in a statement in Baptist Press, the SBC’s news service. “Now is the time to ensure the survivability and sustainability of the churches we have planted over the last few years.”

Bates said he hopes pastors, with time at home, will be doing their best to gather congregants in mid-week Bible studies via video conferencing and develop high-quality livestreamed weekend worship services. They will determine how to respect copyright protections on the music they feature and figure out ways to continue celebrating Communion online.

In some cases, ministers might be at their houses preaching and will connect to music ministers in their homes for live music.

RELATED: With coronavirus concerns, sales up for prepackaged Communion cups and wafers 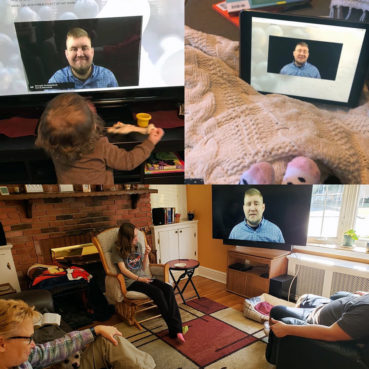 “When a presentation of the gospel is in a format that’s poorly lit, with poor audio, we can’t hear them and we can’t tell what’s going on, immediately our interest drops,” said Bates, who has been guiding more established churches who suddenly need to learn about YouTube and Facebook Live as they compete with high-production TV and movies.

“It’s very important that we try to maintain that kind of standard.”

Borchers said his Providence church planned to up its game for this Sunday, not only featuring a livestreamed sermon but also recorded songs from a worship leader, with lyrics running along a ticker-like display on the bottom of the screen so church members can sing along from their homes.

Bates, for his part, cannot travel right now and so can’t visit different church plants or do regular recruiting. Instead, he said, he will handle his job differently on Sundays until the virus subsides.

“What I’m going to start doing is kind of perusing different people’s video feeds across the country,” he said. “In theory, I could hit a 10 a.m. sermon in each time zone for the first four hours of the day.”